In the ninth in our Icon series (where we investigate how sartorial, style classics have come to reach that status) we celebrate the timeless appeal of the Hawaiian shirt.

As the 1930s unfolded thousands of fortunate Americans indulged in a 2500-mile cruise to Hawaii aboard the newly commissioned luxury liners of the Matson Navigation Company (or, for the more adventurous, on one of Pan American Airway’s Pacific Clipper flying boats). One can imagine that on arrival it was unlikely that wives would have allowed their husbands to dally for too long with the sensuous flower-clad, hip-swaying, hula girls who greeted tourists as they disembarked. On the other hand it is more than likely that before the end of the vacation they would be coercing hubby into one of the extravagantly decorated shirts favoured by the athletic native surfboarding youths.

The less well off too, sailors and soldiers, also took to the shirts when serving out their dream posting to the US Naval base at Pearl Harbor. A dream that of course came to a bitter end in 1941 when the Japanese attacked with devastating effect.

Who was first to make the Aloha shirt, as it is correctly termed, is disputed, some say it was an émigré Japanese merchant while others claim it was nimble-fingered mums running up shirts from kimono scraps for their surfboarding sons. In 1933 a native Hawaiian, Ellory Chun, was the first to commercialise production, mass producing shirts and selling them from his former Chinese dry goods store and in 1937 he was also savvy enough to register the term ‘Aloha Shirts’ – aloha, of course, being the Hawaiian greeting for both hello and goodbye. What is not in dispute is that what started as a fashion fad for local consumption in the 1920s and 30s exploded into a major export industry after WWII.

The first Aloha shirts were made from exotically decorated imported fabrics from Japan and Asia but local entrepreneurs soon began to produce homegrown designs.

One who did more than almost any other to popularise the Hawaiian shirt abroad was Alfred Sheehan. Born in New Jersey, of Lebanese parents, his family moved to Hawaii in 1938. After war service as a fighter pilot Alfred, in 1948, opened a small custom tailoring shop. Rather than depend on the sometimes-erratic delivery of cloth to the Pacific island Sheehan set up a silk-screening facility and started to produce his own fabrics using the talents of local artists to produce exotic designs reflecting Polynesian culture. Traditional floral patterns were soon augmented by palm tree-bedecked tropical scenes incorporating amongst other themes boats, planes and automobiles, which broadened the appeal of the shirts, particularly amongst the emerging ‘mainland’ California surfing and hot rodding fraternity.

Within a decade Sheehan employed 400 people and the production of shirts and fabric had become a major Hawaiian industry and export. Alfred closed his factory in 1988 and retired to California and original ‘Sheehans’ are now much valued collectors items commanding hundreds and sometimes many thousands of dollars.

The December 10th,  1951 cover of Life magazine could have spelt the end of the Hawaiian shirt as a cool fashion item. Middle-aged US Presidents were not renowned fashion icons and the sight of a slightly portly Harry Truman sporting one probably didn’t have ‘hipsters’ rushing to emulate. What it did demonstrate was that the Aloha shirt had gained acceptance as a respectable item of casual wear in mainstream USA. Almost exactly a decade later a sexier role model did far more to enhance the shirt’s image when Elvis Presley, fresh out of the Army, (and years before he became, sartorially at least, a rock and roll Liberace) starred in ‘Blue Hawaii’ wearing, in the film and on the cover of the soundtrack album, an Alfred Sheehan shirt.  (As a 15-year old I sat through the movie twice, bought the album, but remained unconvinced by the shirt – that took another decade or two.)

The 1980s saw the Aloha shirt reach a peak of popularity, albeit with its image reduced to something of a bad taste cliché, when the Hawaii-based TV series Magnum, P.I. prompted thousands of middle-aged beer-gutted barbecuing Dads to adopt the shirt in a vain attempt to turn themselves into a Tom Selleck clone.  Selleck’s ‘Jungle Bird’ print shirt now resides in the collection of the Smithsonian Asian Pacific American Centre.

What was once a souvenir of a sun-soaked holiday in a Pacific island paradise has been copied around the world, sometimes to the point of caricature, but amongst devotees of Americana the Aloha shirt remains a fashion essential and although they are now mostly produced anywhere, but in Hawaii, for purists seeking the genuine article I’m pleased to say that local production is still thriving. 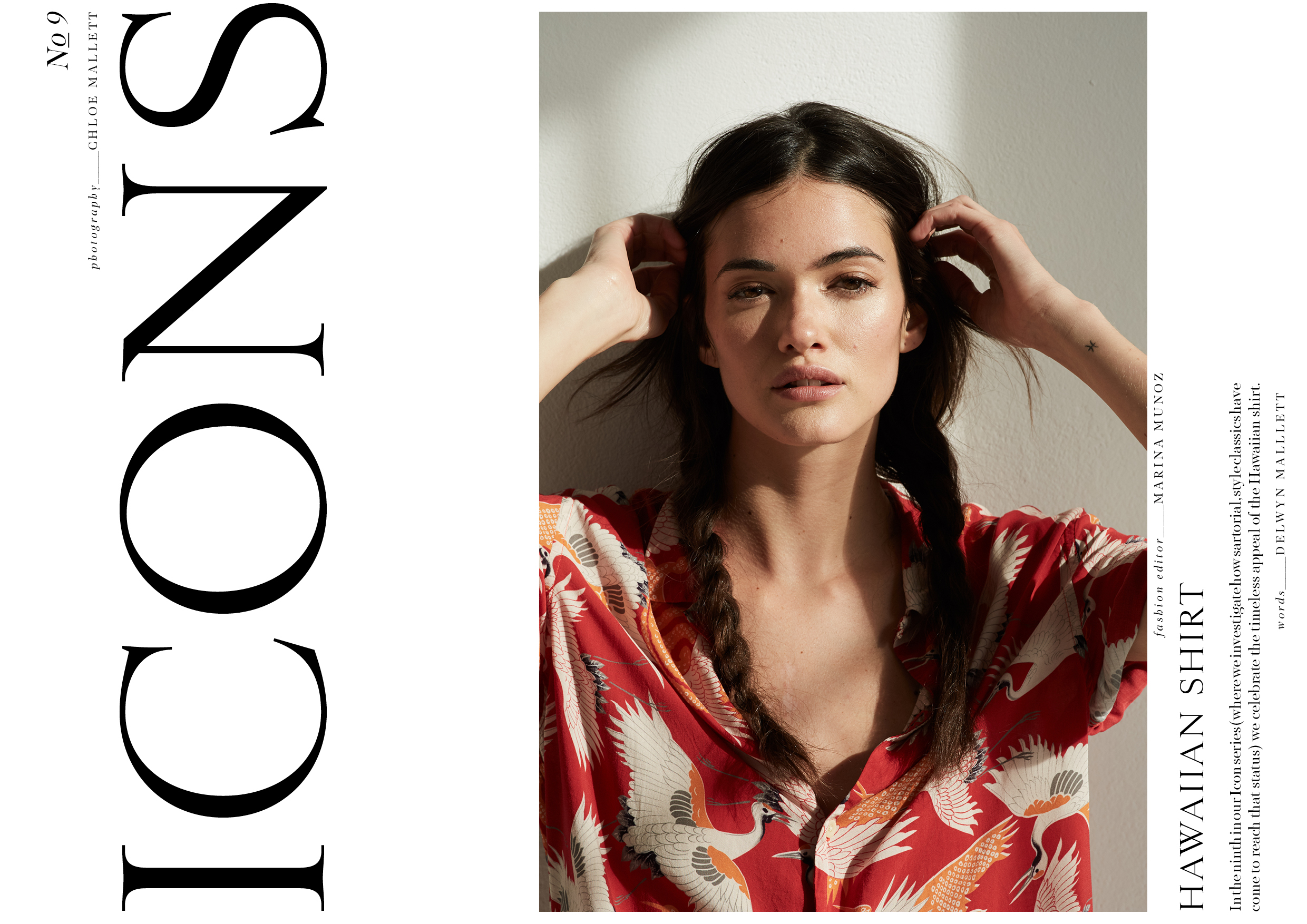 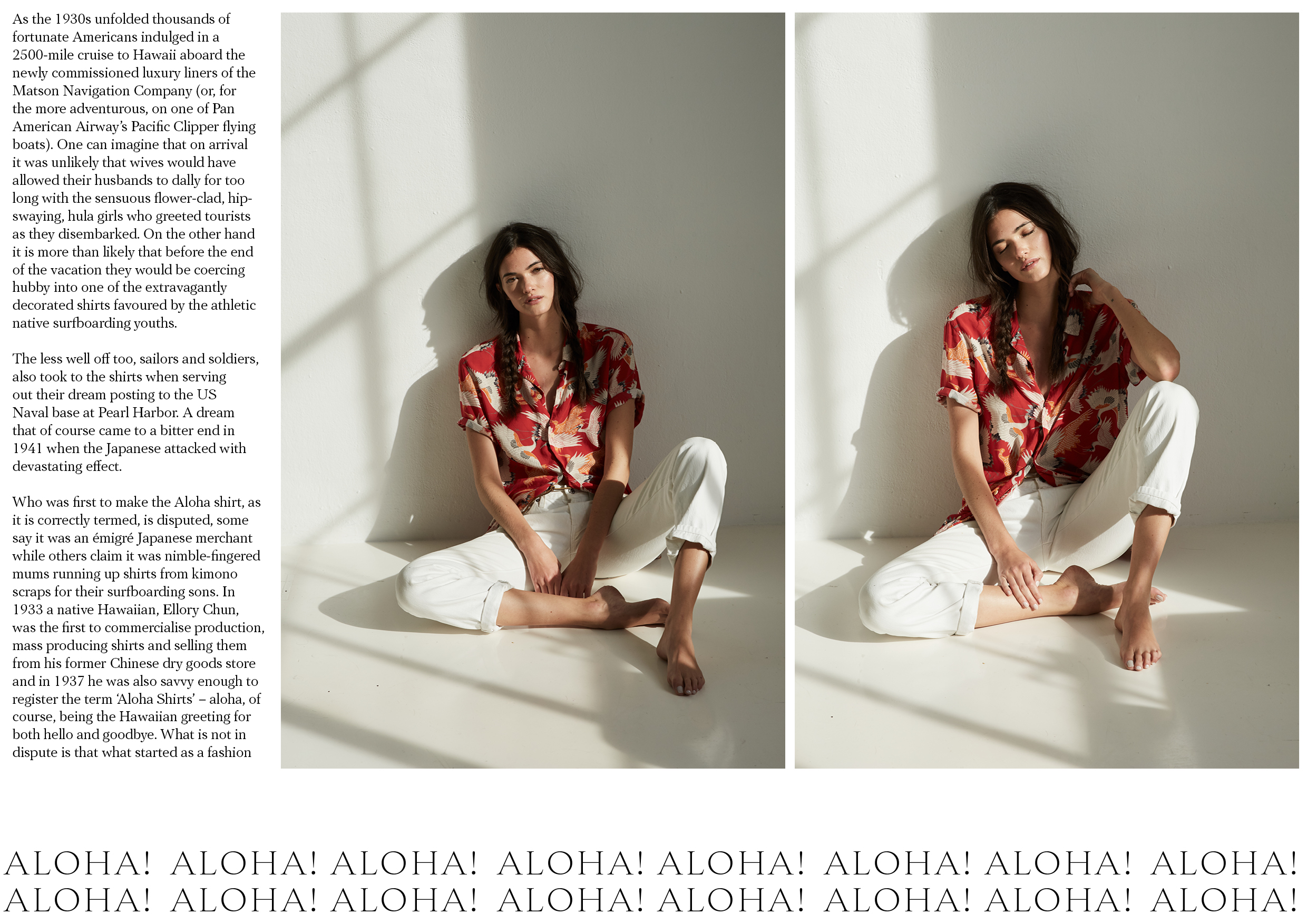 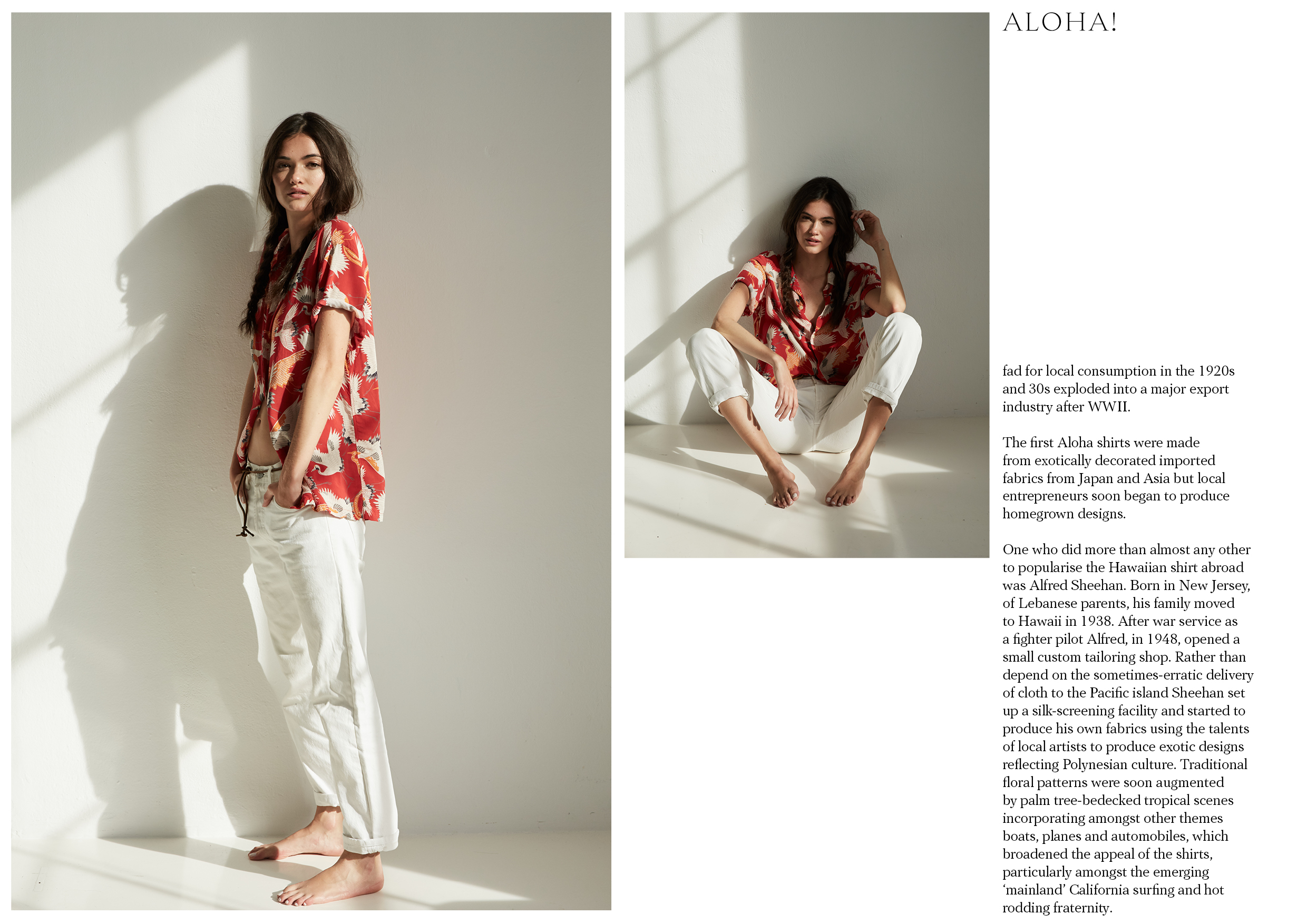 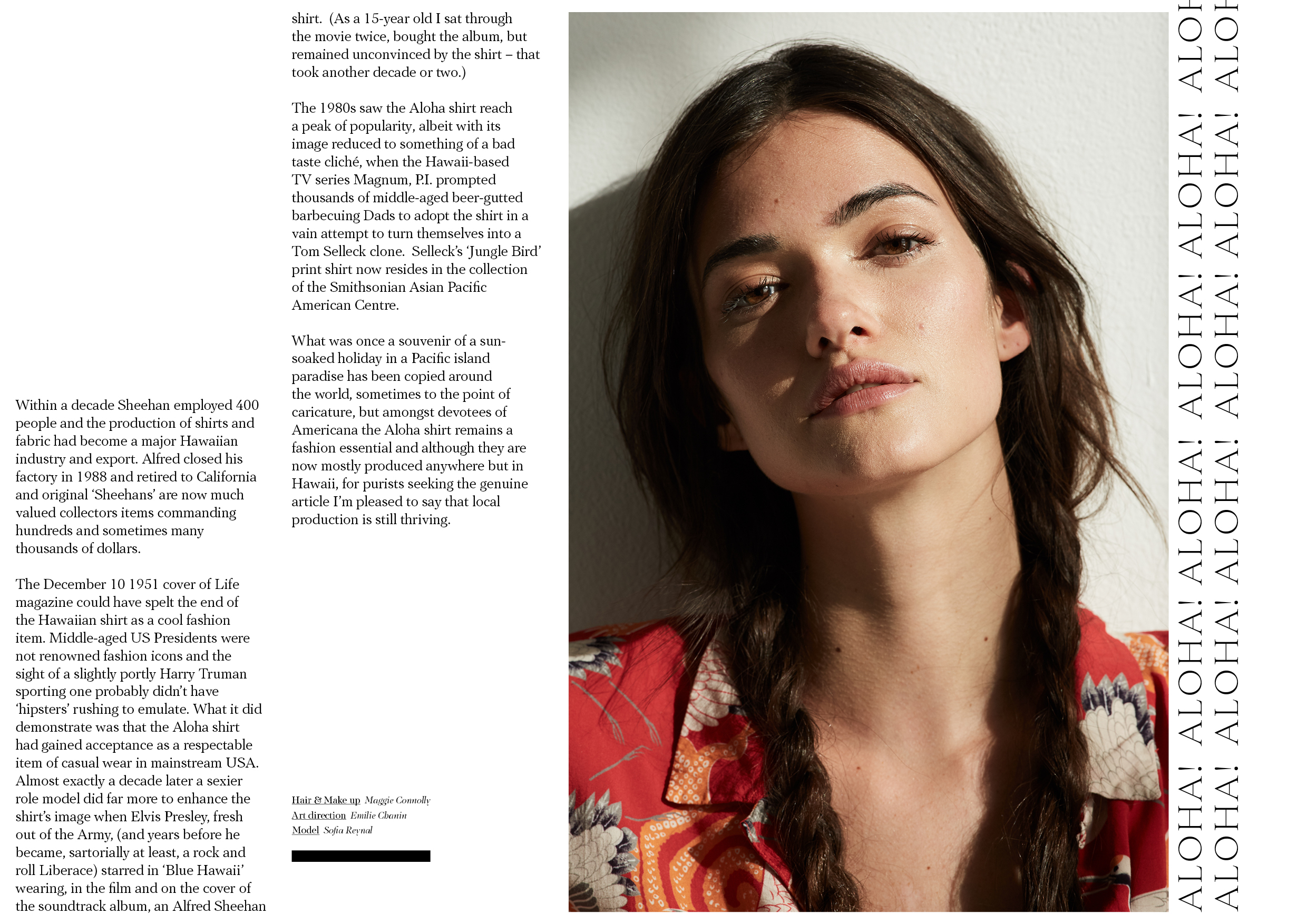