I can’t possibly begin a piece about secrets without opening with one of my favourite Simpsons lines of all time. Chief Wiggam catches Bart and Millhouse red-handed, snooping through a cupboard at the police station. He looks the boys in the eye, sighs and says “What is your fascination with my forbidden closet of mystery?”

It’s funny (of course) because we all know that the forbidden is intrinsically fascinating. Our urge to expose the hidden, to find out the truth, to open the locked box, is a universal human instinct, one that spans all cultures, eras, ages and genders. From Eve’s compulsion to taste the forbidden apple in the Garden of Eden, to Pandora opening Epimetheus’s box of sickness and death, our myths and folk stories have always reflected our desire to know the unknown, no matter the risk. (Come to think of it perhaps I should take back that last part about gender, as historically women do seem to have been made to carry the can for our collective dislike of being kept in the dark.)

It’s not rocket science to understand why we are so intrigued by secrets, and so motivated to uncover them. If knowledge is power, then secrets are obviously a threat. It’s not just that you don’t know. It’s that somebody else does. That puts them in the dominant position, gives them control.   Secrets are about control. About power, and who has it. About exclusion. Worse, there is an unspoken assumption that if something is being kept secret, it can only be for one of two reasons. Either it is something really really important/valuable/desirable which is being unfairly withheld or denied from us. (Eve’s apple. KFC’s ‘secret ingredients’ Good God, what ARE they?!)   Or it is something terrible, illicit, dishonest or evil, being perpetrated behind our backs. (The government’s ‘secret dossier’ on weapons of mass destruction, to name but one.)

These two categories of secret – the really good and the really bad – in fact both play on the same, universal human emotion. Fear. Because fear is the other things that secrets are all about. The fear of missing out, or FOMO, has become commonplace in Silicon Valley investor-speak, as a means by which to persuade would-be financial backers to part with their money. ‘Secret’, proprietary technology that may revolutionize an industry and create the next wave of billionaires is dangled like a carrot in front of gullible outsiders, those who want to be let in on the ‘secret’ of wealth and success, and whose sense of exclusion can be used to manipulate them. It’s not a million miles from the political manipulation of voters, whose fear of pernicious ‘secrets’ being hidden from them by an imaginary ‘elite’ was used to such devastating effect in the last US presidential election.  Think Hillary Clinton’s ‘secret’ emails, a story that had many Americans whipped up into believing that Trump’s opponent was actually a spy, a murderer and worse, chanting “Lock her up!” like a lynch mob from Lord of the Flies.

Secrets, then, are often about power, control and fear. But there’s one other, less doom-laden human trait that helps give them their power over us: curiosity. Which of us hasn’t rushed to Twitter for information when a ‘famous footballer’ or ‘powerful businessman’ take out an injunction to stop his name being printed in the newspapers, usually in relation to some salacious allegation? I am sure I only remember the gory details about Ryan Giggs affair with his sister in law and Sir Phillip Green’s (alleged) bottom grabbing in the office because they tried to keep their names a secret.

Interestingly, these injunctions are always issued on the basis of an individual’s right to privacy. Which begs an important question – what is the difference between ‘private’ and ‘secret’? Is there even a difference any more, in our social media age, where everything from our naked bodies to what we ate for breakfast is ‘shared’ compulsively and relentlessly with complete strangers across the globe?   It’s certainly true that my generation’s notion of privacy and its importance is very very different from my daughter’s. (I’m 45, she’s 26.)   If human beings are compulsive secret keepers, and secret un-earthers, then we are also becoming compulsive sharers, willingly sacrificing our own privacy for…what exactly? I’m not quite sure. Attention, perhaps? A sense of belonging? A need for validation?   When I question my daughter or her friends about why they have chosen to put such-and-such a thing out on Facebook – information or images that my friends and I would consider private in our own lives – they often respond with “Well why not? It’s not a secret.’”

Privacy, then, may be dead or dying, a concept soon to become as outdated as “chivalry” or “decorum.” But secrecy is alive and well, and I can’t see the allure of secrets fading any time soon.  Racine famously wrote that “there are no secrets that time does not reveal.” That is probably true. But for each secret uncovered, a new one will take its place. Because we humans simply can’t live without them. 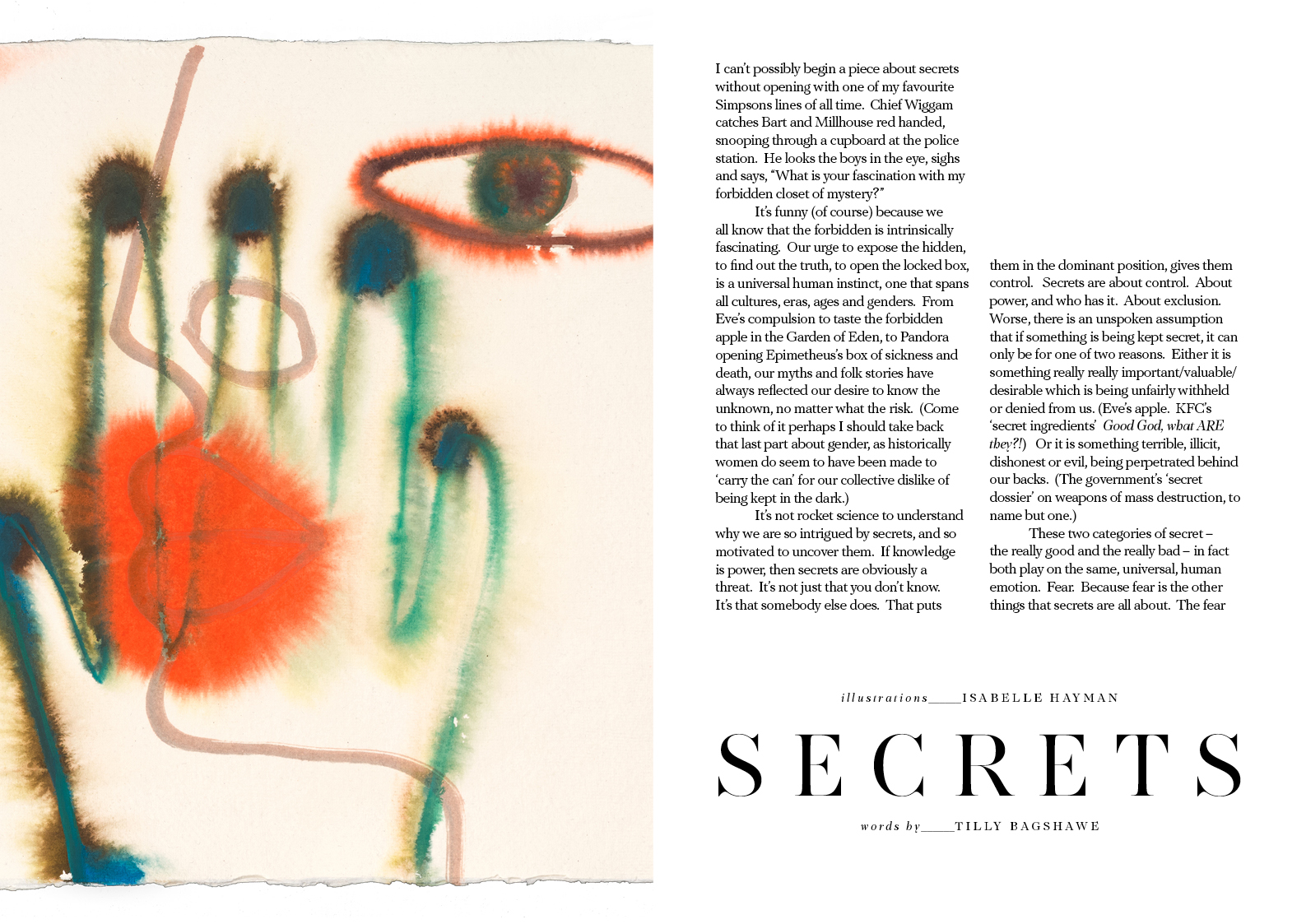 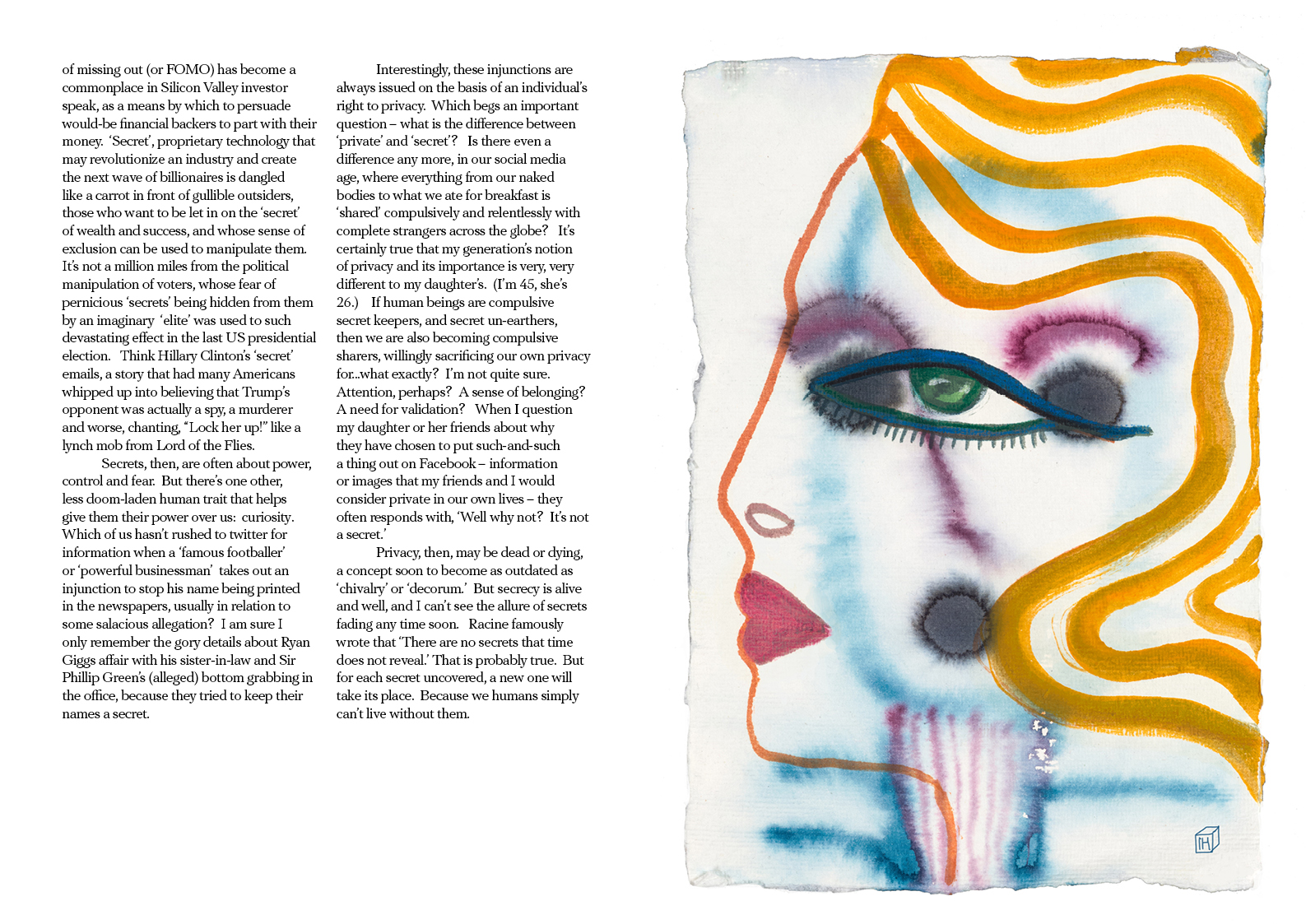