In the seventh of our features on seminal sartorial pieces, we focus on a very British fashion icon, the Fred Perry classic shirt.

In June 2013 Andy Murray ended a 77-year barren patch in British men’s tennis by winning the Wimbledon singles final, a feat he repeated in 2016. In addition to the worldwide headlines and the fulfilment of personal ambition this achievement also gained him a knighthood, making him the youngest ‘Sir’ of the modern era.

Perhaps less welcome but more amusing, it was reported that ‘an Andy’ in some quarters soon supplanted the long-established ‘Ruby’ in the lexicon of rhyming slang. (For our foreign readers, in the witty world of Cockney slang Ruby Murray, a popular Irish singing star of the 1950s, provided the original rhyme for our Saturday-night national dish – a takeaway curry.)

Few will now remember what brand of shirt Andy wore in the 2013 final but if his victory had come only a little earlier in his career there’s no doubt that the media fuss over the symmetry of the occasion would have ensured that we would all recall that he was wearing a Fred Perry – his first major sponsor.

Unlike his superstar predecessor, Andy hasn’t lent his name to a clothing range and it’s unlikely that he will ever become the enduring cultural icon that Fred created with his eponymous sports shirt.

Fred Perry was a working-class lad born in Stockport, Cheshire, in 1909. His family moved south when he was nine and Fred took up playing tennis on nearby public courts. Already a world table tennis champion at the age of 19 Fred went on to become Britain’s greatest tennis player, winning Wimbledon in three consecutive years and the first (and only) Britain to win all four Grand Slam titles.

Superstar he may have been, but in 1936 the rewards for success were meagre. Fred received £10 for his Wimbledon victory – Andy Murray £1.6 million.

Far from being proposed for a knighthood for his achievements the establishment considered Perry as the ‘wrong type’ because of his background and after committing the ultimate sin, turning professional in a sporting world that was still essentially amateur, he was ostracised by the tennis establishment. America was less class conscious and much more appreciative of his talents and Fred emigrated, became a naturalised US citizen, and won the US Pro tennis championship in 1938 and 1941.

When not playing tennis Fred had a reputation for playing the ladies. He married four times and dated more than a few of Hollywood’s glamorous stars, including ‘Blonde Bombshell’ Jean Harlow and the sultry siren Marlene Dietrich.

With his film-star good looks and international fame, it was only natural that an entrepreneur would want to capitalise on the Perry name. The step into fashion was at first a very small one. In the late 1940s Tibby Wegner, an Austrian ex-footballer, sought Perry’s endorsement for a wrist-worn antiperspirant device and, after some input from Perry the first sweatband was created. This was followed, in 1952, by a white piqué cotton, short-sleeved tennis shirt with an embroidered laurel wreath based on the original Wimbledon logo, and quite frankly little different to the shirt introduced by the great French player and former Wimbledon champ, Rene ‘Crocodile’ Lacoste, in 1933.

In the late 1950s the white shirt, the only colour allowed in the sport, was supplemented by a range of coloured shirts for table tennis. Although immediately successful the Perry brand probably would have remained confined to sporting circles if it was not for the extraordinary cultural phenomenon that emerged in the late 1950s and early 60s – the ‘Modernists’, soon to be known simply as ‘Mods’.  The Modernists emerged as a reaction against the Brylcreemed, leather-clad rockers and the bearded, sandal-shod, duffel-coat-clad, trad jazz and skiffle acolytes. Mod was cool, sharp and a blend of fashion styles from Italy (from whence the scooters also came), France and US Ivy League, and Mod music was modern jazz and rhythm & blues spiced with a little West Indian ska.

For the first wave of Mods – BB, before Bradley (Wiggins) – the uniform of choice was Clarks Desert Boots, or penny loafers, teamed with a three-button Tonic suit, invariably worn over a buttoned to the top polo shirt. In my neck of the Mod-woods the polo shirt was known as a ‘Perry Como’ after the Italian-American crooner, ‘the most relaxed man on television’, the personification of Ivy League fashion and so laid-back he made Dean Martin look hyperactive. There weren’t that many homegrown polo shirts around and the ‘Fred’ rapidly assumed its place in fashion history, which was assured when it became de rigueur for a later Mod spin-off tribe, the rougher, tougher, Skinheads.

Belated recognition came Fred Perry’s way in 1984 when, half-a-century late, a commemorative statue of him was unveiled at Wimbledon. Ironically, by then, as Fred acknowledged, for the majority of Britain’s youth he was better known not as a tennis legend but the name of a cult fashion brand. 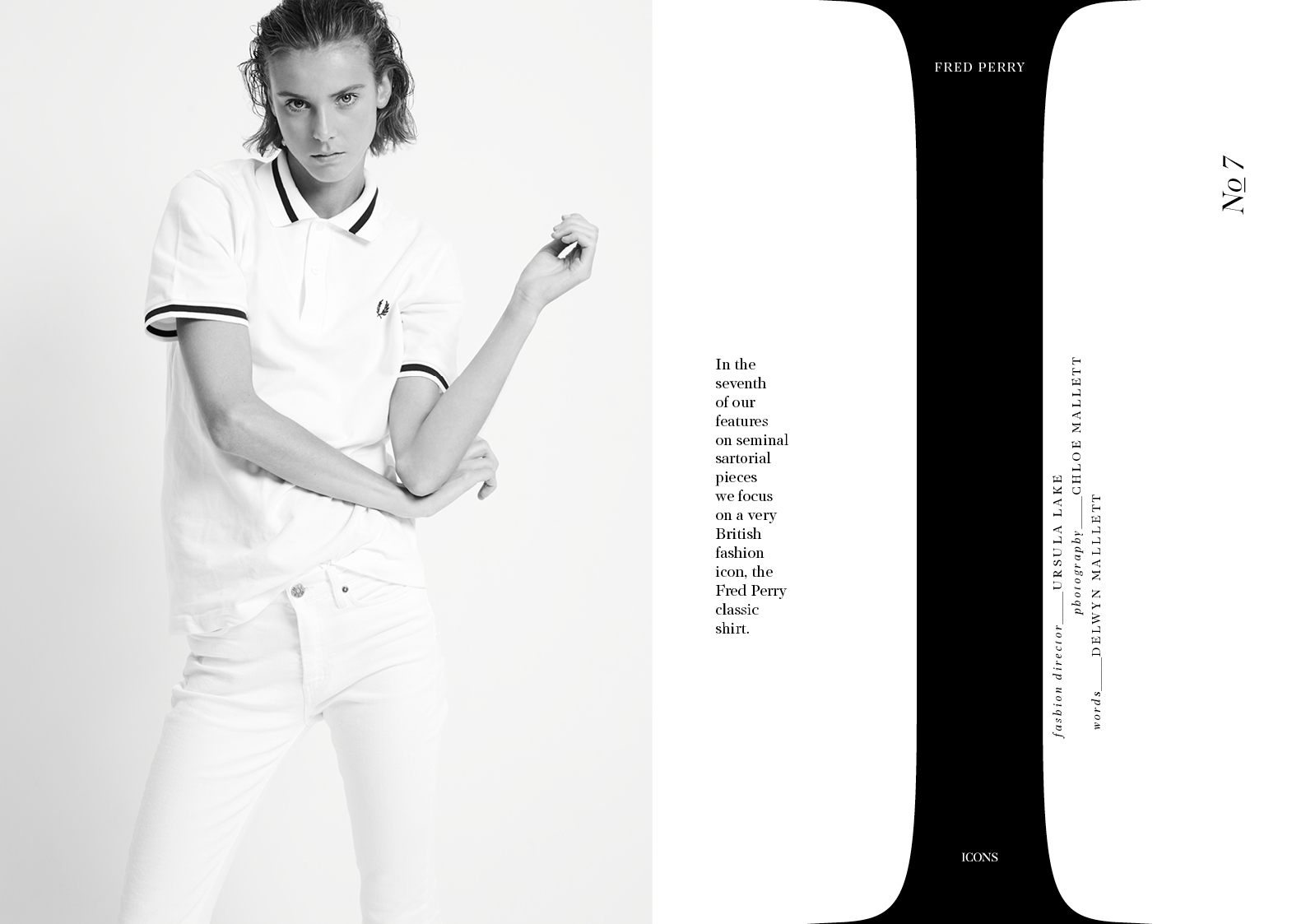 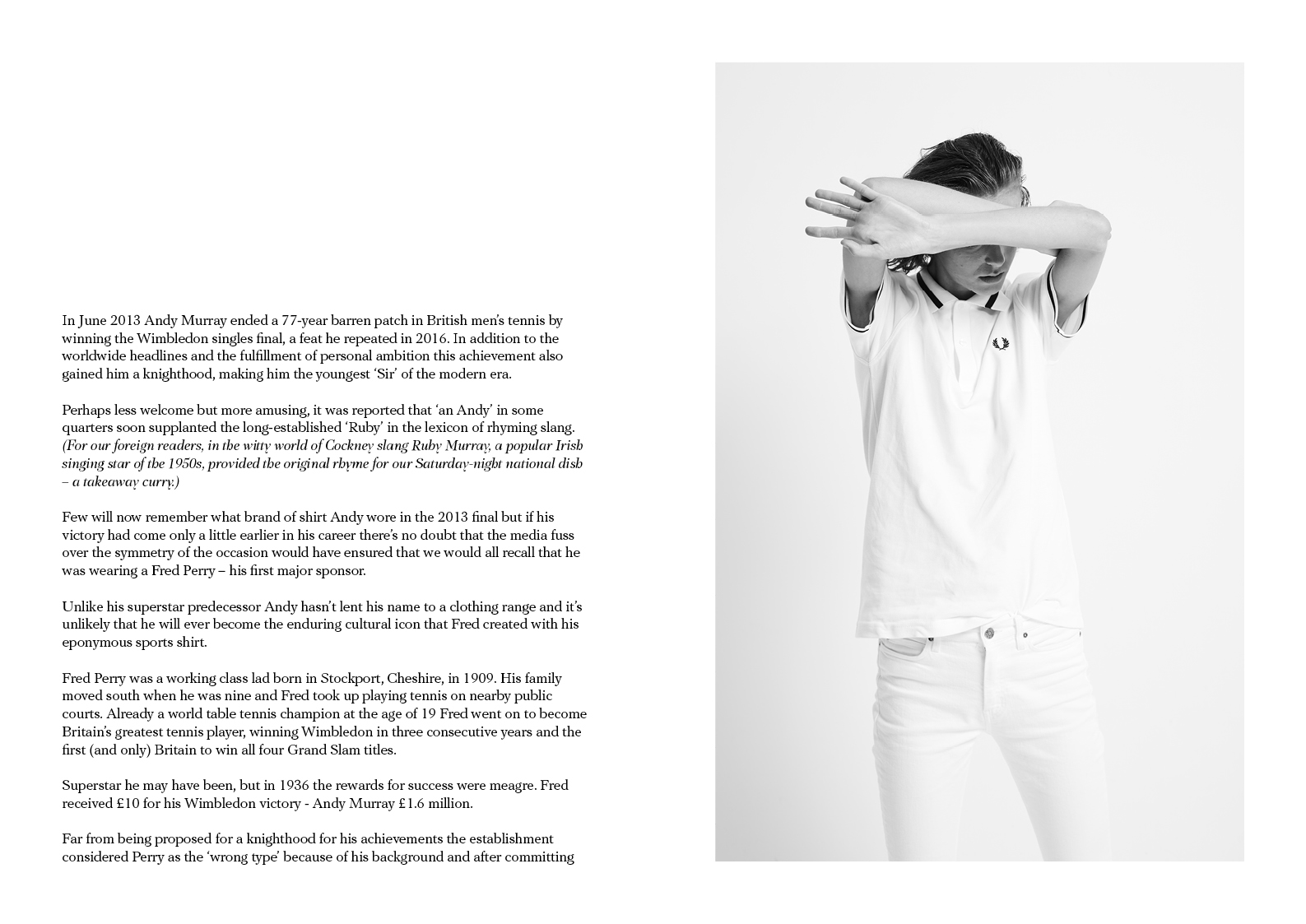 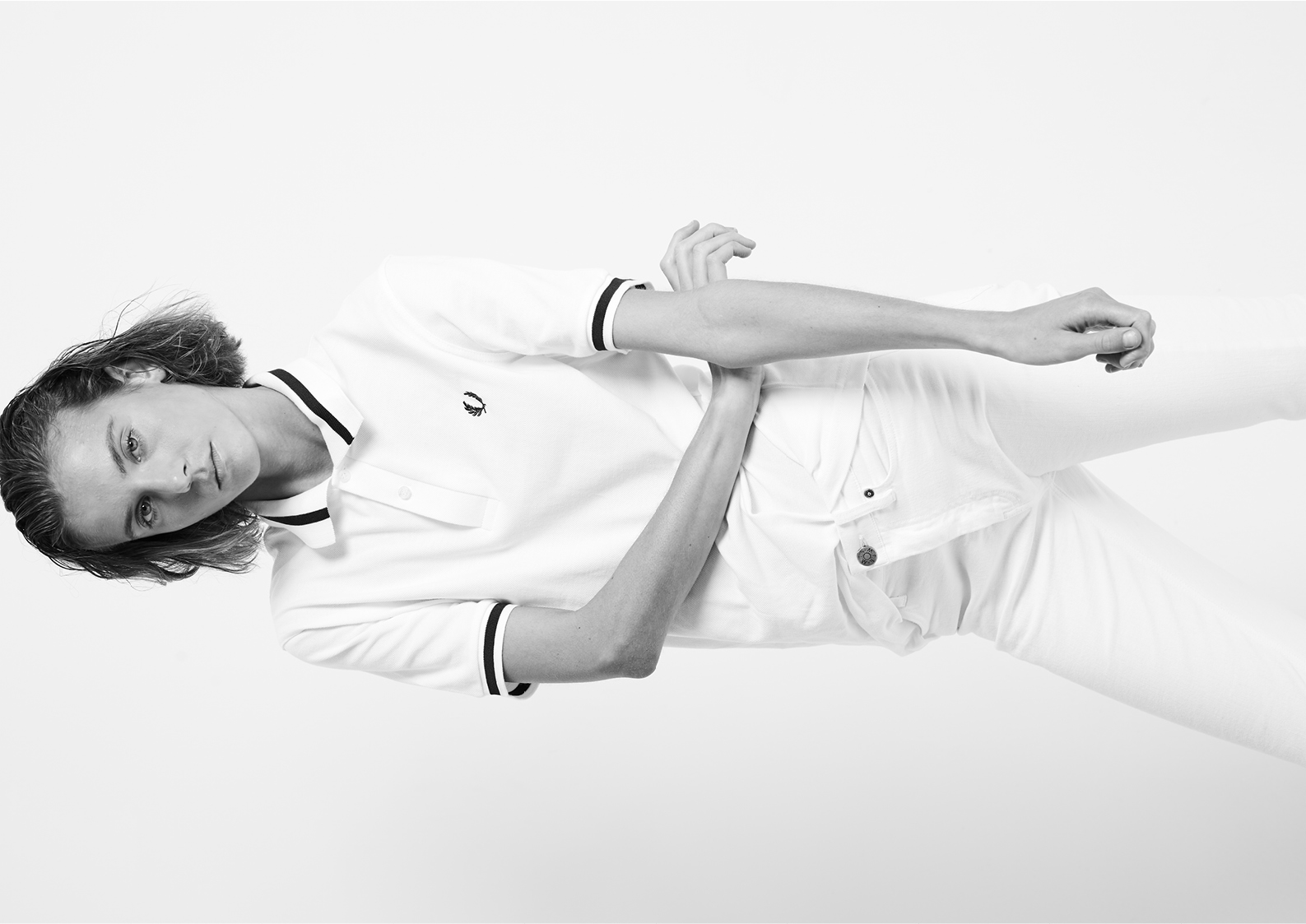 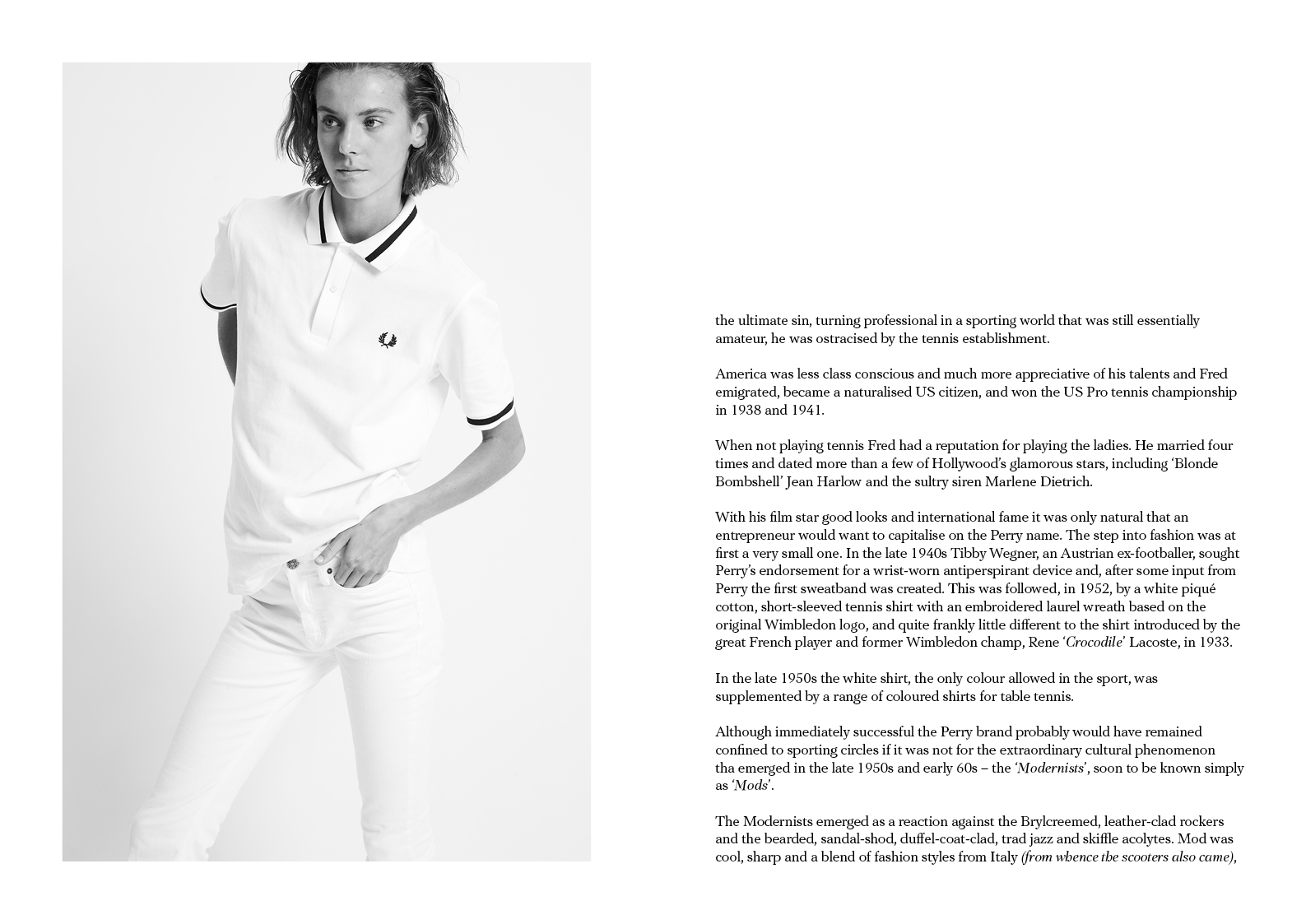 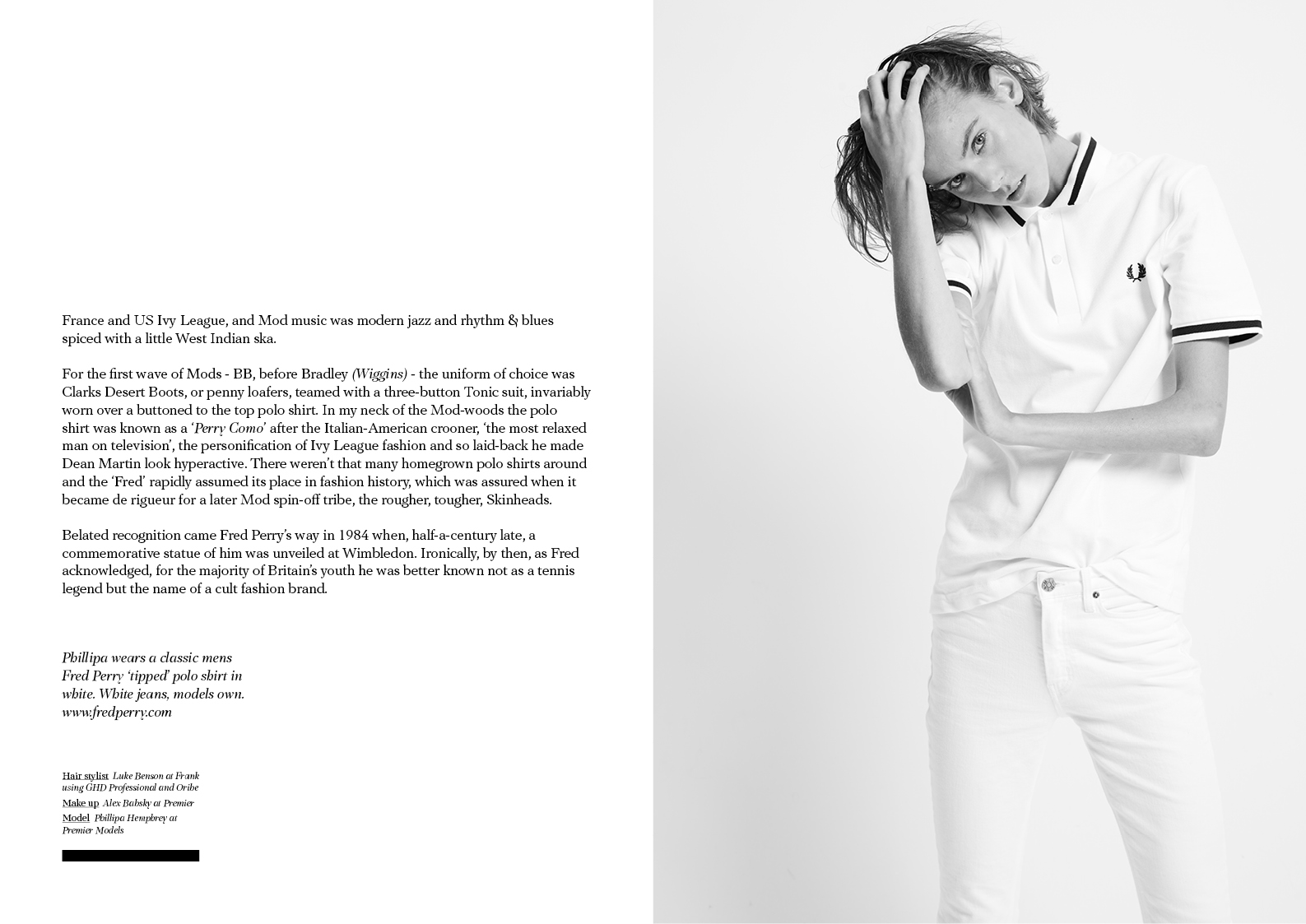