In the sixth of our Icon series, we discuss the unlikely origins of the word bikini and everything that has come after.

The world is once again obsessed with atomic bombs and who should or should not have them. There will be few alive today that will recall that rather bizarrely those little triangles of fabric collectively referred to as a bikini adopted the name from a Pacific atoll that the American government was attempting to nuke into an uninhabitable lump of fused silica.

In February 1946 the 167 residents of the tiny Bikini Atoll in the Marshall Islands were asked to temporarily leave their home for ‘the good of mankind and to end all world wars’. The US wanted to test the effect of Atomic bombs against shipping and on July 1st they exploded what would be the first of more than 20 tests stretching into the late 1950s. In Paris four days after the first Atomic test, Louis Réard, a mechanical engineer who had turned his hand to running his mother’s lingerie company, dropped a sociological bomb of his own by revealing his ‘bikini’, the name pinched from the headlines of the week.

A month earlier, further south in France, the couturier Jacques Heim had pipped Réard to the post with his own two-piece costume, curiously also referencing the atom for a name. Heim, however, was not referring to the Bomb but merely the fact that his ‘L’Atome’ costume was ‘the world’s smallest bathing suit’. But, crucially, not small enough. With modesty in mind, Heim’s costume extended high enough to cover what to modern eyes appears to be a curiously quaint no-go area – the belly button.

Back in Paris Réard’s creation eschewed such modesty and was causing a sensation.
Réard’s four triangles of fabric, featuring a newsprint pattern and reminiscent of the improvised sunhats workmen folded from old newspapers, was deemed so outrageous that no professional models would wear it and he had to hire a cabaret dancer, Micheline Bernardini, from the nearby Casino de Paris to pose for the press.

Improbably the Daily Telegraph once claimed the bikini for Britain, crediting the head of my old art school, Osmund Caine, with ‘inventing’ the bikini in a painting that he produced in 1938, in which three casually dressed men ogle a beach-load of beauties that to all intents and purposes appear to be wearing costumes, including a navel-revealing two-piece, painted onto their naked bodies. Caine responded to this suggestion by saying that he would rather have painted the women nude but had to think of the ‘propriety of the setting’.

The bikini was considered an outrage against public morals and was banned on many beaches around the world but the belly button was here to stay. In 1951 Eric Morley staged what would become the ‘Miss World’ beauty pageant as the ‘Festival Bikini Contest’, the only time that the contestants would be crowned wearing a bikini as in all subsequent events the one-piece costume would prevail.

The bikini’s desirability, if not respectability, was greatly enhanced in 1953 when the 19-year-old movie sensation and soon to be international sex goddess, Brigitte Bardot, posed for photographers on the Carlton Hotel beach at the Cannes Film Festival.

By the 1960s even conservative American women were adopting the bikini and the 60s also provided another key ‘bikini moment’ when, in the Bond movie Dr. No, a glistening Ursula Andress emerged from the ocean in a white bikini with a large knife sheathed in a matching belt slung around her hips, capturing the attention of not just James Bond but the world.

And what of those displaced people who lent their name to this exercise in minimalism? In 1954 the first Hydrogen bomb blasted millions of tons of their atoll into the atmosphere despite the fact that the US knew that the wind direction was unfavourable and that the poor displaced Bikinians would be in the path of the nuclear fallout. Apart from irradiating the inhabitants of the Marshall Islands radioactive ash fell on a Japanese fishing boat, the inappropriately named Lucky Dragon Five, resulting in the death of one of the crew and severe illness for the others.

Temporary displacement turned into a lifetime of enforced deprivation and currently only four or five ‘caretakers’ live on the Bikini Atoll.

As the comedian, Bob Hope ruefully observed, “As soon as the war ended, we located the one spot on earth that hadn’t been touched by the war and blew it to hell.”

Hair by Craig Taylor at Haris Hair Salon and at One Represents
Makeup by Sonia Deveney at One using Sukin skincare
Model: Harriet Rose at Select
Fashion Assistant Stephanie Kelly 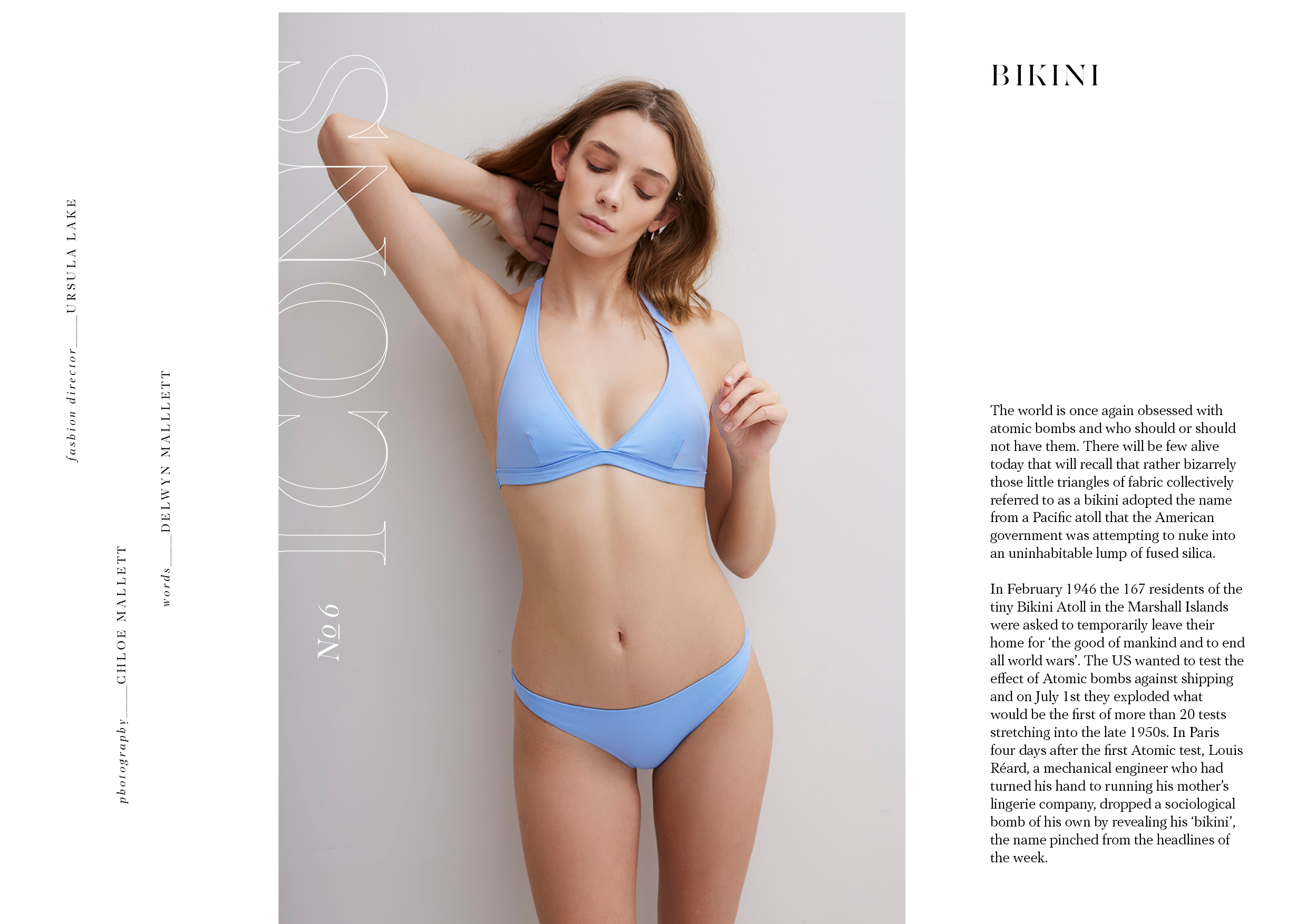 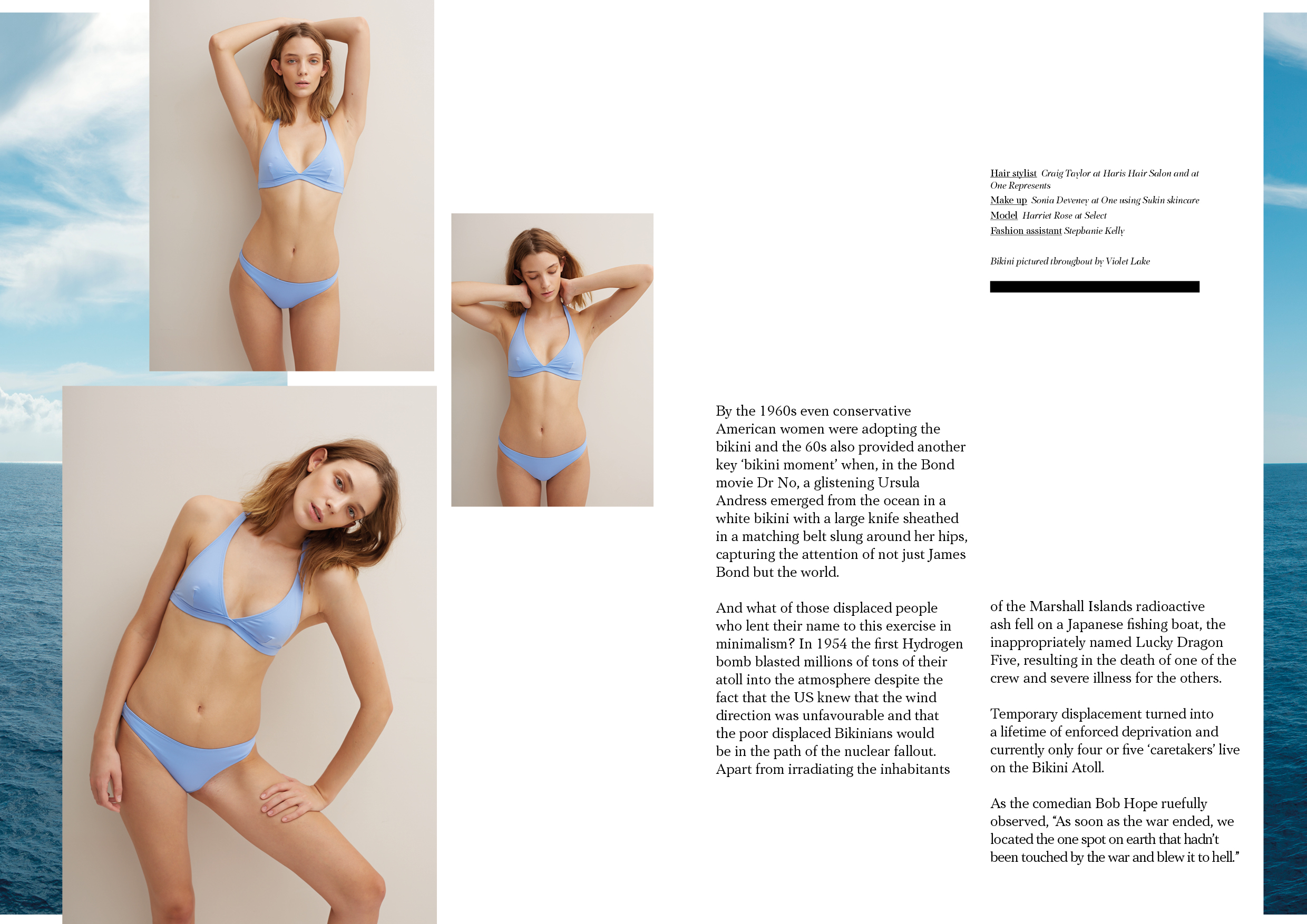 Hair by Craig Taylor at Haris Hair Salon and at One Represents
Makeup by Sonia Deveney at One using Sukin skincare
Model: Harriet Rose at Select
Fashion Assistant Stephanie Kelly