Make chats with the new star of TV series ‘Krypton’, the supercharged Wallis Day who is out to save the world.

Coco Chanel said that a woman who cuts her hair is about to change her life. In Wallis Day’s case, it completely changed her career. Before the chop, she says she was cast as a “bimbo – the stereotypical extension of the main guy, the supporting role, who is just there to look good”. On a whim, Day changed her bum-length, blonde locks to a cheekbone-enhancing power bob, a haircut that frames her stunning face, with those deep blue eyes and Angelina Jolie lips. The kind of haircut that says, notice me as a woman, as an individual.

Which must have been the intention because Day has no desire to be a sidekick. “I need substance in a role,’ she says, slapping her hands against each other enthusiastically. ‘I love the kind of roles that Angelina Jolie and Jessica Chastain get – the spies, the secret agents, the action-packed movies. They really inspire me because they have shown that a girl can play a lead James Bond-type role.”

Not that everyone was as pleased about the change, to begin with. “My agent was livid because all my upcoming auditions were dropped, and a very quiet, nerve-wracking week followed. Then slowly I started getting the type of auditions that I really wanted. When you want to change yourself and want to evolve, you have a different vision from everyone else. You know who you want to be, but when that vision is reaffirmed, that feels really good. It felt like a weight had lifted. I felt a lot more like me.”

Day was offered three roles that week but the one she really wanted was as kickass villain Nyssa Vex in the Superman prequel Krypton. But with only previous roles in Hollyoaks (she played Holly Cunningham for 13 months), The Royals and ITV’s Jekyll and Hyde, Day wasn’t a natural shoe-in. “I think it’s fair to say they weren’t that interested. They didn’t think I was experienced enough or right for the character. But I kept persisting and, when I didn’t get an audition, I made a tape anyway and sent it over. I’m a Virgo, which might be why I’m so passionate. I give everything my all and get very emotional if things don’t work out the way I hoped. I didn’t hear anything for weeks, and then they called me, on my birthday. I couldn’t believe it.”

The type of superhuman sense of self-belief that comes with the territory of an early acting career hasn’t always come naturally to Day. She tells me she went to 11 different schools, all in different parts of the country. “I kept on being kicked out of school and banned from catchment areas. I was naughty and bored but also misunderstood. I do genuinely love education, particularly maths, but I have a very creative, restless mind. I played a lot of pranks. I liked pushing boundaries.’

Thankfully one school (the sought-after Pates Grammar in Cheltenham) had a strong drama department where Day could express herself without breaking too many rules. “I was in a school play at a woman who was setting up an acting academy was in the audience. I was lucking enough to make an impression and she introduced me to my agent.”

It has to be said that being in charge of Day’s teenage daily welfare, must have been challenging to say the least. Not only is prestigiously clever (she started school at the age of two), incredibly beautiful and a natural leader, she has incredible levels of energy. She never stops moving and talks fast. During the shoot for Make Magazine, she never tires out, thanks perhaps to being a signed modelling since she was 13 (she was the youngest model at Models1 for three years), she also has a personal CV that includes training to swim for the 2012 Olympics and being a published author.

“I put my energy levels down to my vegan diet and I love sport – boxing, Muay Thai, Wushu, and surfing,” she says, waving her tanned, toned arms around. I’m a massive adrenalin junkie and go to Cape Town to go surfing as much as possible.” The waters around Cape Town are freezing, dangerous and full of Great White Sharks. “A huge fin came past me once and I thought, this is it. Thankfully it was just a very big dolphin. I wasn’t scared though; I just thought what an amazing way to go.” Even in the face of a cavernous mouth full of razor-sharp teeth, Day finds an upbeat angle.

Day, 23, was born in Hackney, London, to an accountant father and a pharmacist mum. Her parents now restore and sell historic properties. Despite her teenage misdemeanours, she is still very much in the fold of her family. “They are really supportive. I miss them when I’m away. I don’t think I could live full-time in LA (Day has an agent there) unless I had a family of my own.” When she left home in Cheltenham to move to the Sylvia Young Theatre School in London at the age of 16, I imagine her parents had little choice but to let her go. “Both my parents are very educated, so it was hard for them to persuade them that acting was the only path for me. But in the end, I went to so many schools and got in so much trouble, my dad was like, if you want to go, just do it. But whatever you do, do it 100%.”

And she did. Despite what sounds like a pretty solid privileged middle-class upbringing, Day did her dues. She lived in a room no bigger than a single mattress (every time anyone came in the door, they hit the bed, she says). “I rented it for 80 quid a week. I had one pile of clothes in the corner and got a job in retail and just went to every audition I could. I never questioned the sanity of it. Like most creative people, I feel like there is a hole inside of me that needs to be filled, and for me, only acting can do that. It’s never been an option not to do it.”

But Day isn’t simply an ego-driven starlet on a one-way, blinkered mission to become a huge success. She’s also equally passionate about more altruistic matters. She’s heavily involved in the charity Hope & Homes for Children, which helps ‘deinstitutionalise’ orphaned children in Central and Eastern Europe and East and Southern Africa. “We work hard to get the children back into a family environment because what we know is that, even more, important than education, is to teach these kids how to love and how to be loved. The mortality rate of children in orphanages in Africa is something like 80% because they are exploited, abandoned and have no support once they leave.”

Her Instagram account is peppered with un-starry images of her playing and talking to children, as well as snaps of her messing around with her younger brother, Henry. There might be the pap snaps of her leaving Nobu  or selfies showing of her uber toned post-work-out body, but don’t expect Day to take the path most travelled. Expect the unexpected from this one. “I know it sounds like a cliché,” she says. “But I’m just super excited for life.” 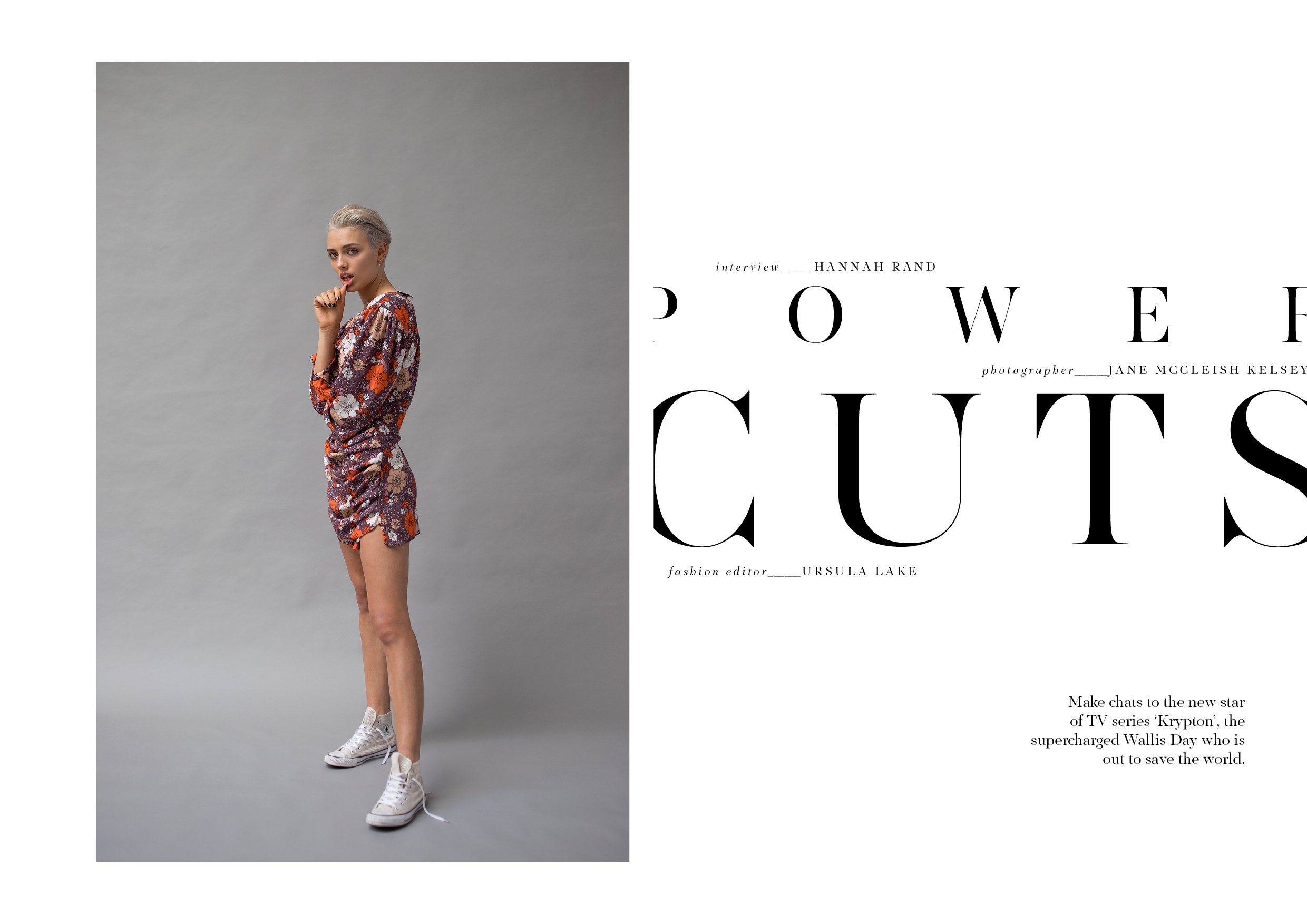 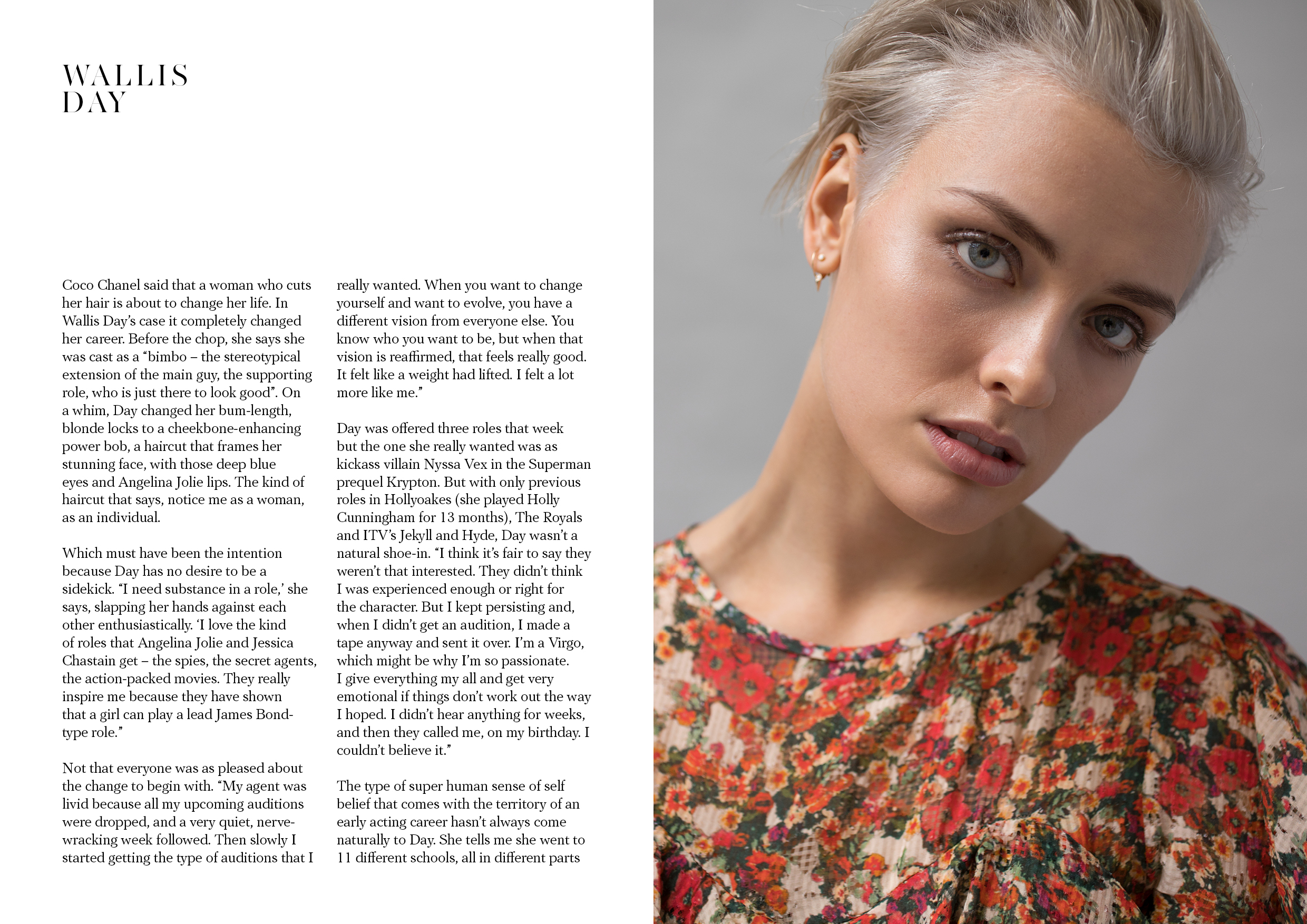 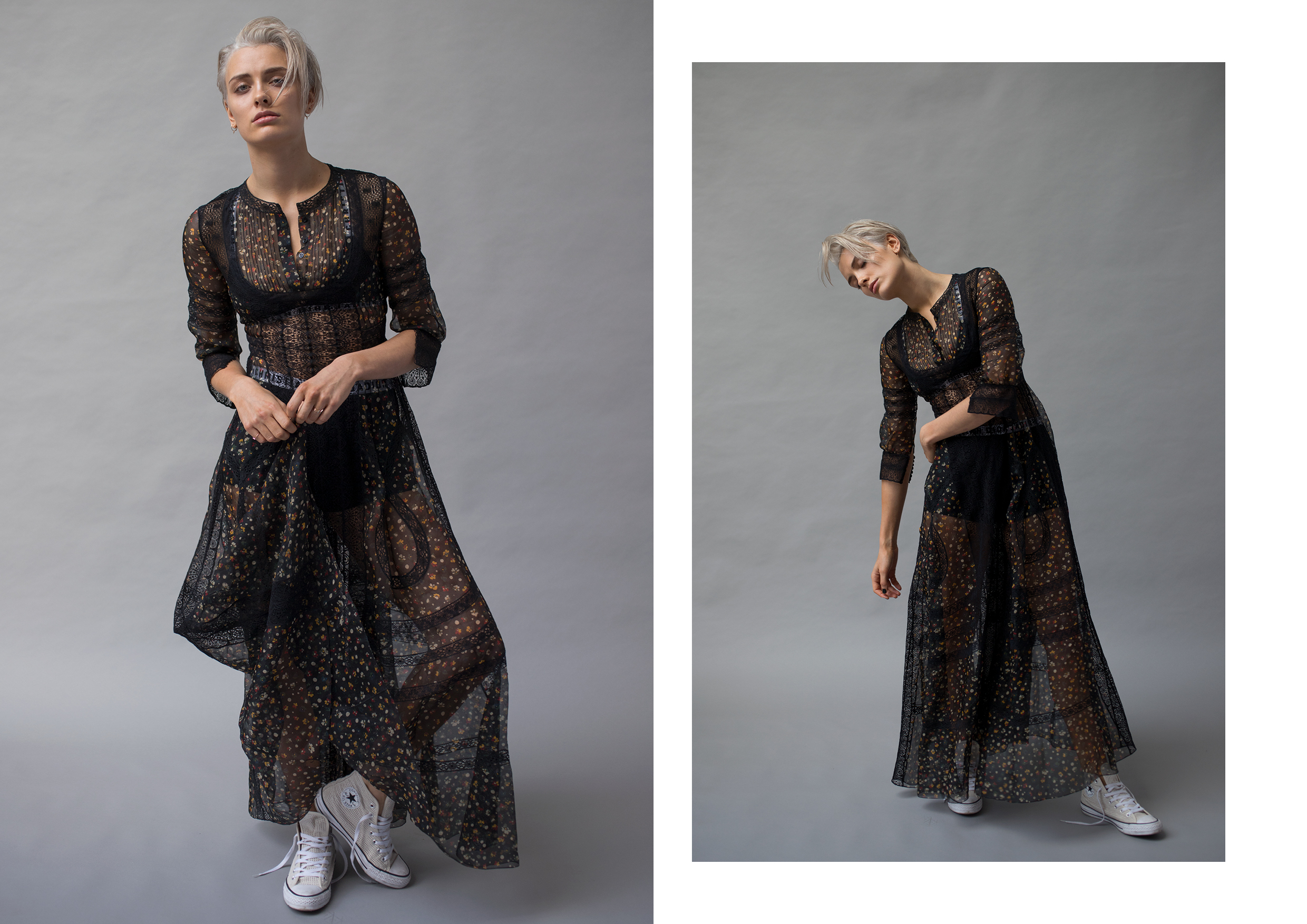 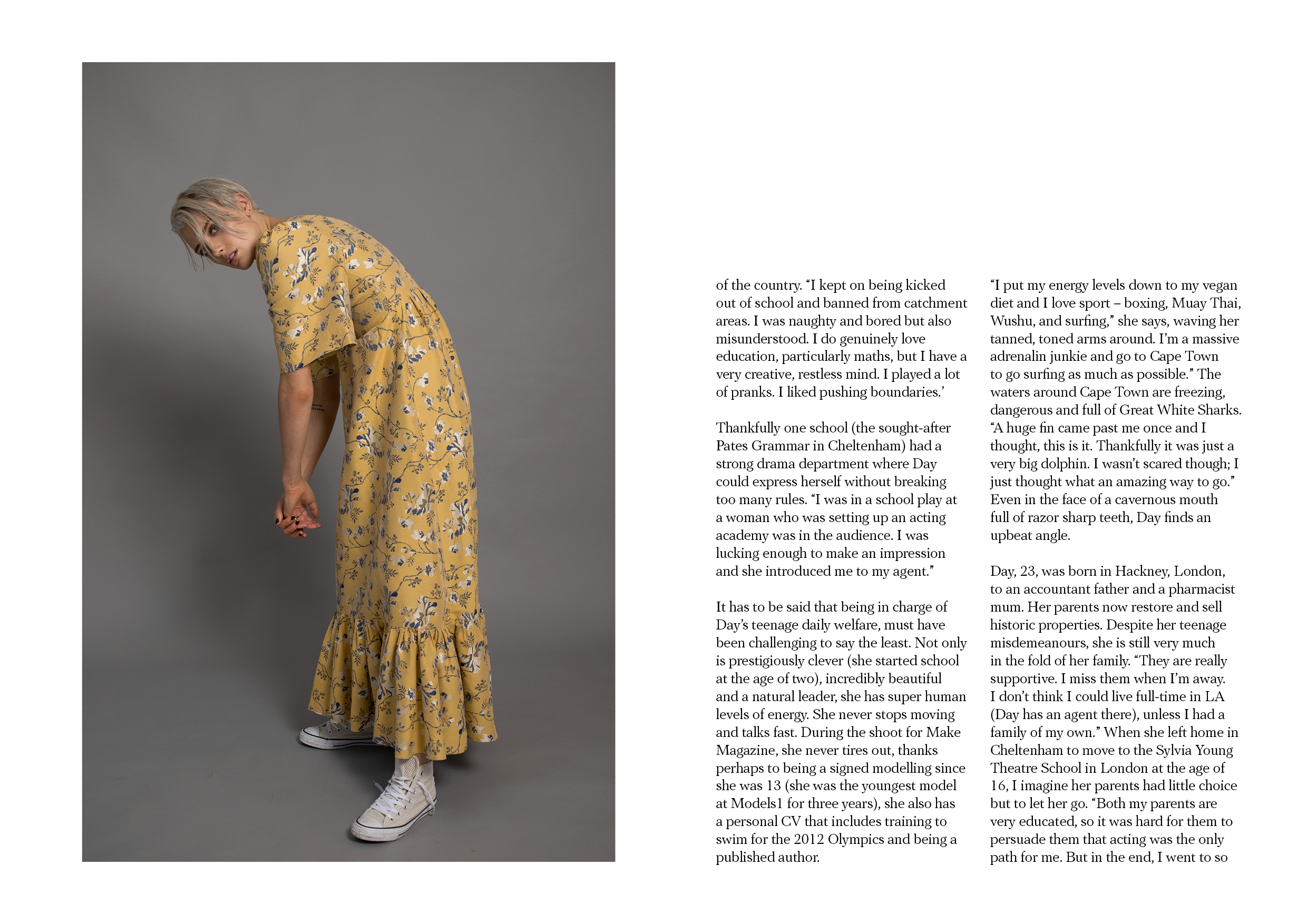 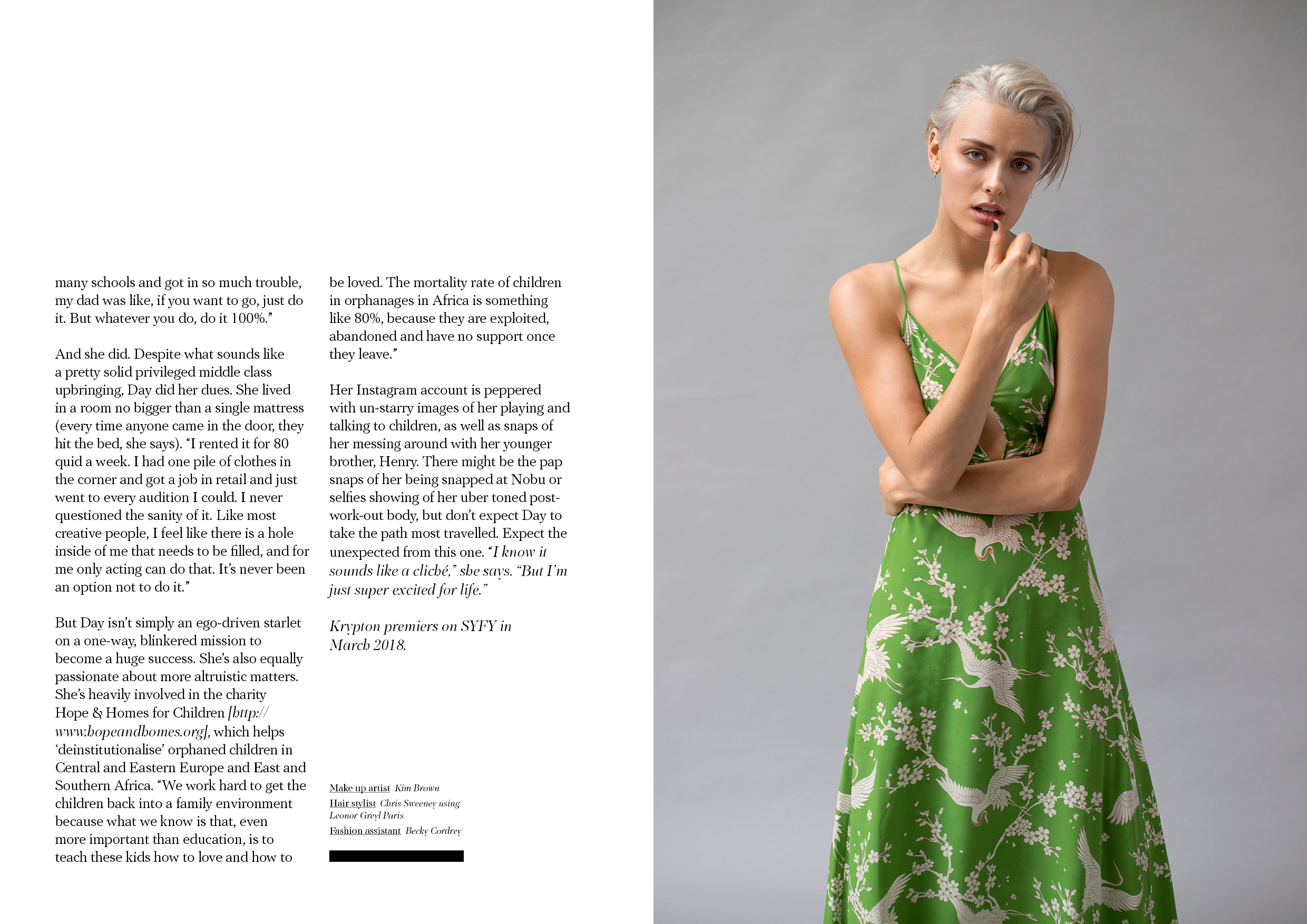