Prince Charles was famously vilified after an ITN interview to celebrate his engagement to Princess Diana when the couple were asked whether they were in love.

“Of course!” replied Diana.
“Whatever ‘in love’ means,” added Charles sardonically.
His response was seen by many as being at worst heartless, and at best tactless. But surely, at different points in our lives, many of us have asked ourselves the same question. What is love, really?

I was at Heathrow Airport last week, picking up one of my sons, and as usual I was reminded of the opening footage of Richard Curtis’s Love Actually, where real families are seen reuniting at the airport — parents and children, couples, siblings — and Hugh Grant reminds us that “love, actually, is all around.” That much, I think we can all agree on. Whatever love is, there’s a lot of the stuff about. The problem is that, for a small word, it has come to encompass so much, so many emotions that are in fact quite distinct from one another,
and sometimes even contradictory. It has been usurped and charged, and politicized, perhaps more than any other word in our language. We are told what it is supposed to mean: “Love is patient. Love is kind.” And yet, in our own lives, it can often feel impatient and unkind, even agonizing at times.

To quote a Shakespeare sonnet — “Love is not love, which alters when it alteration finds.” Really? So a love that doesn’t last forever, that changes or even dies, wasn’t actually love at all?

That doesn’t ring true to me, from my own life experiences. I’m happily married to the man I’ve been in love with for the last twenty years.
But before him, there were others who I loved profoundly. And before me, there were others for him. Neither of us are ‘in love’ with those people now. But doesn’t the fact that we were once, seal permanence? Imprint them on the space-time continuum of ‘real love’ in a way that can never be erased?

Last year one of our children developed some problems with acute anxiety, and my husband and I began taking him to a clinic that specialized in this and other childhood psychiatric disorders. I will never forget one boy who attended that clinic. He was about thirteen or fourteen and suffering from something similar to Tourettes, except instead of shouting out words he would suddenly start screaming. Nothing visible seemed to trigger his outbursts, and afterwards, he would go back to normal. But the screams were utterly unbearable — incredibly loud, gut-wrenching cries of absolute agony, the type of noise that would make you drop your shopping bags and rush across the road to help. This kid made these noises every thirty or forty seconds, all-day-long. My husband and I watched his parents calmly and lovingly interacting with him and with his doctors, trying to talk to doctors about his treatment or progress while he stood next to them and literally screamed as if someone had just thrown acid in his face. We tried to imagine what it must be like to drive in a car with him, to home-school him as they did, to eat meals with him or watch a television program, or to try to take a flight. Impossible, we agreed. It would be impossible to live with this child without losing one’s mind. And yet they did. Their love for him was so evident — so patient, so kind, so immutable.

It was a beautiful and inspiring thing to see. But it also got me wondering about the different kinds of love. Parental love — the kind that makes you run into a burning building or a tsunami to save your child, or that imbues you with the sort of superhuman tolerance these poor parents had, day after day after day — is surely different in its very nature to romantic love. It can perhaps be summed up in one word: unconditional. Romantic love can be as deep and as real as parental love. But in my experience, it is rarely unconditional — and that’s a good thing. To take an extreme example, if a man you are deeply in love with

punches you in the face one day, that is likely to change your feelings. As it should. Romantic love, and certainly marriage, is, in fact, a contract between two equals. You promise certain things to one another: loyalty, fidelity etc… If the promises are broken, there is at least the possibility that the love, too, may break. It may not. But it may.

Parental love isn’t like that at all, at least not for me. It is not a love between equals, nor is it a contract. If one of my children were to punch me in the face I would not be happy about it and consequences would ensue! But the chances of it altering my love for the child in any way would be zero. Not because I love my children more than my husband. But because I love them differently.

It’s an over-used word, but I think that in many ways romantic love is a narrative. It’s a story we choose to tell ourselves about our connection to another person. We edit out the painful parts, the uncomfortable parts, the unhappy parts. And we write a story in our heads, and hearts, that is true; it just isn’t the whole truth. The weaving of the story is itself an act of love. To remember the good. To choose the good. To build on the good and let the bad fall away, impermanent, forgotten.

What, then, is ‘love’?  I’m afraid I don’t have the answer, any more than poor old Prince Charles did. The closest I can get is probably this: Love is a connection. A force that binds us to each other, that makes us more than just ourselves.  It’s not perfect. But it’s perfect enough. And it actually is all around.

‘Murder at the Mill’, the first book in Tilly’s new cosy crime series, will be out this Christmas with Orion Books. 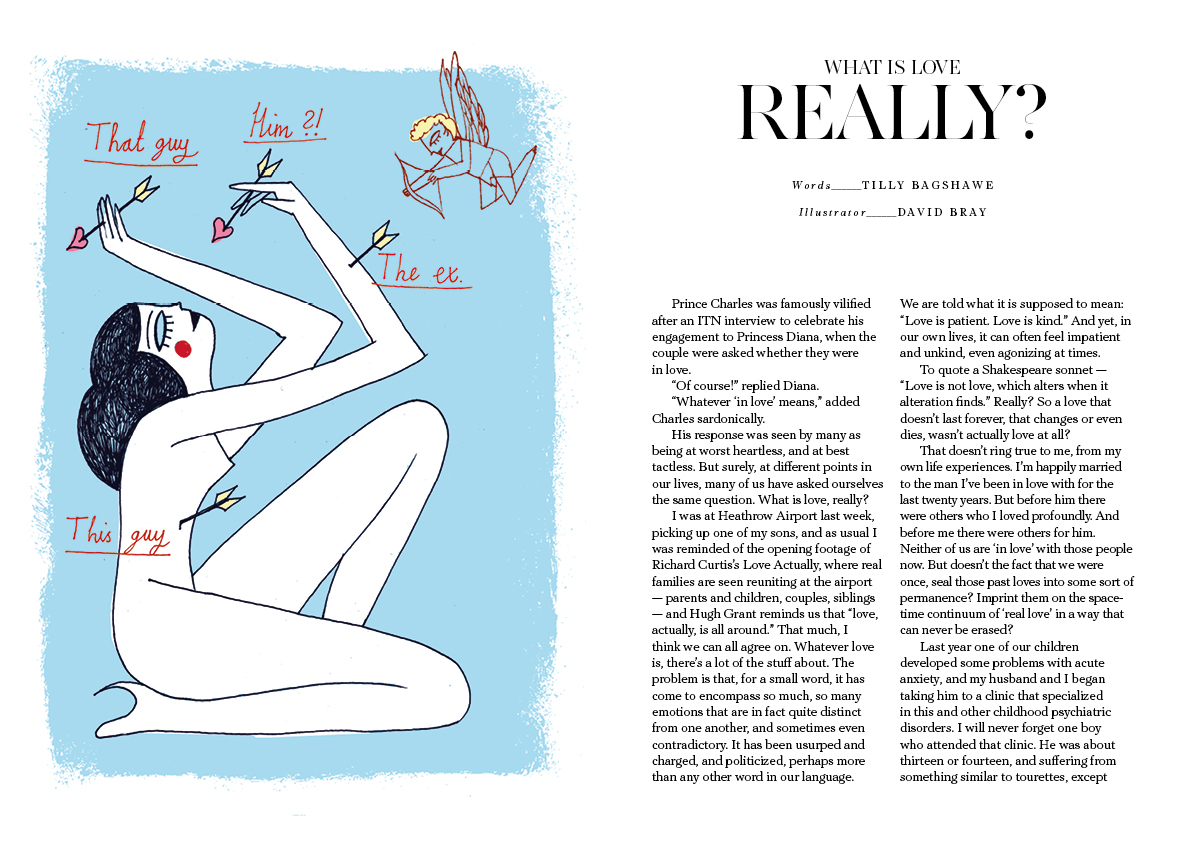 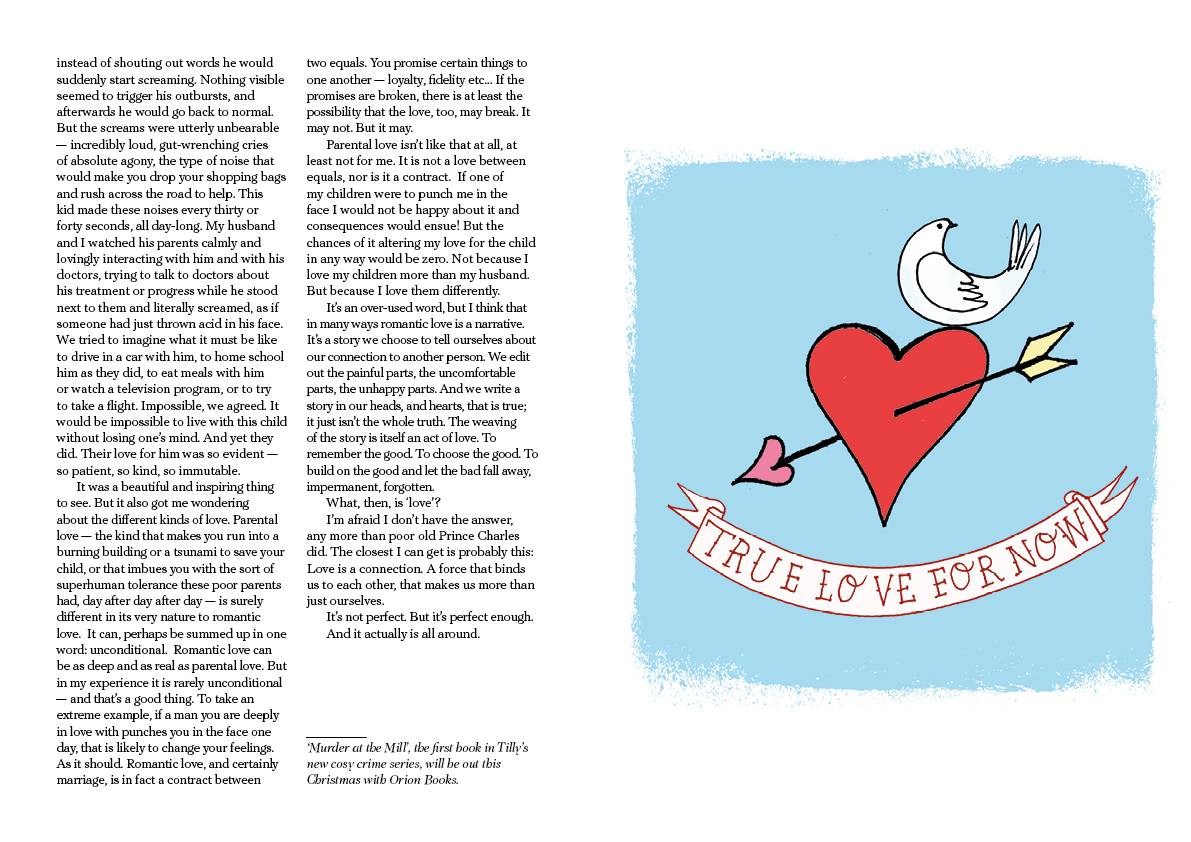