IN THE THIRD OF OUR INVESTIGATIONS INTO THE WORLD’S FASHION CLASSICS, MAKE DISCOVERS THE HISTORY BEHIND THE UBIQUITOUS AND WELL-LOVED TRENCH COAT.

Ok. I have to confess. I’m old enough to have grown up wanting to be Humphrey Bogart. Well, not the real-life one but his on-screen persona as a private eye. In common, I’m sure, with thousands of men of a certain age before me, when eventually I slipped into my first ‘Burberry’ I assumed a little of that Sam Spade cool, even if the meanest street I was about to tread was no more threatening than a typically English high street.

Imagine my amusement, then, to see in my weekend paper’s style guide that ‘the trench coat is back’. This, of course, begs the question, did it ever go away? For all of the 20th century, the trench coat was a staple of many a man’s wardrobe, be he a dedicated follower of fashion, or not. Indeed, since 1901, when Thomas Burberry introduced his eponymous coat, it has remained a garment that transcends the whims of fashion and has been copied by countless manufacturers around the world.

Thomas Burberry opened a modest outfitter’s shop in Basingstoke, Hampshire, 150 years ago, specialising in outdoor clothes for sportsmen and gentlemen. The business prospered but the big leap forward came in the 1880s when Burberry developed a lightweight, water-resistant, breathable fabric woven from long-fibre Egyptian cotton, which he called gabardine.

In 1891 Burberry opened a shop in the Haymarket, at the very heart of gentleman’s London. The British Army was making the transition from too conspicuous, easy for the enemy to take a pot-shot at, scarlet to khaki and a more utilitarian style, and in 1895 Burberry introduced the ‘Tielocken’ coat specifically for his military customers. The Army, recognising the need for a practical topcoat for it’s fighting men, tendered Burberry in 1901 for just such a garment.

Adapting the Tielocken, Burberry produced a weatherproof with enough flaps, belts and buckles to repel a typhoon. Double-breasted, with a generous wrap-over secured by ten buttons, a flap on the right breast sealed the lapels against liquid ingress. With collar erected a pair of brass clips held the neck closed and a flap swung into position to seal the gap, while added protection for the back was provided by a separate yolk stitched into the shoulders.

Around the waist, a broad belt cinched the coat firmly to the wearer’s body and four brass D-rings allowed the odd bit of military ordnance to be dangled from it when necessary. Button-down epaulettes catered for the stowing of a soft hat and the generous rear box pleat allowed the coat to drape over a saddle.

In 1914 the Burberry became the standard military coat, rapidly, and for obvious reasons, becoming known as the trench coat. Over half-a-million were issued during the Great War. The ‘trench’ was rapidly adopted by armies across the world and by civilians who appreciated its practical value as well as its air of dashing masculinity.The distinctive red, white, black and camel check lining was introduced in 1924 but it was not until 1967 that Burberry turned inside-out and the famous check started to be used as a fabric in its own right, at first on bags and umbrellas and later clothing.

Between the World Wars Hollywood fell for the trench in a big way: every film-noir private dick sported one. But, for an entire generation, the trench coat became the coolest coat on the planet after Burberry-clad Humphrey Bogart, playing world-weary nightclub owner Rick Blaine, strolled into the fog and a new life at the end of the 1942 movie, Casablanca. 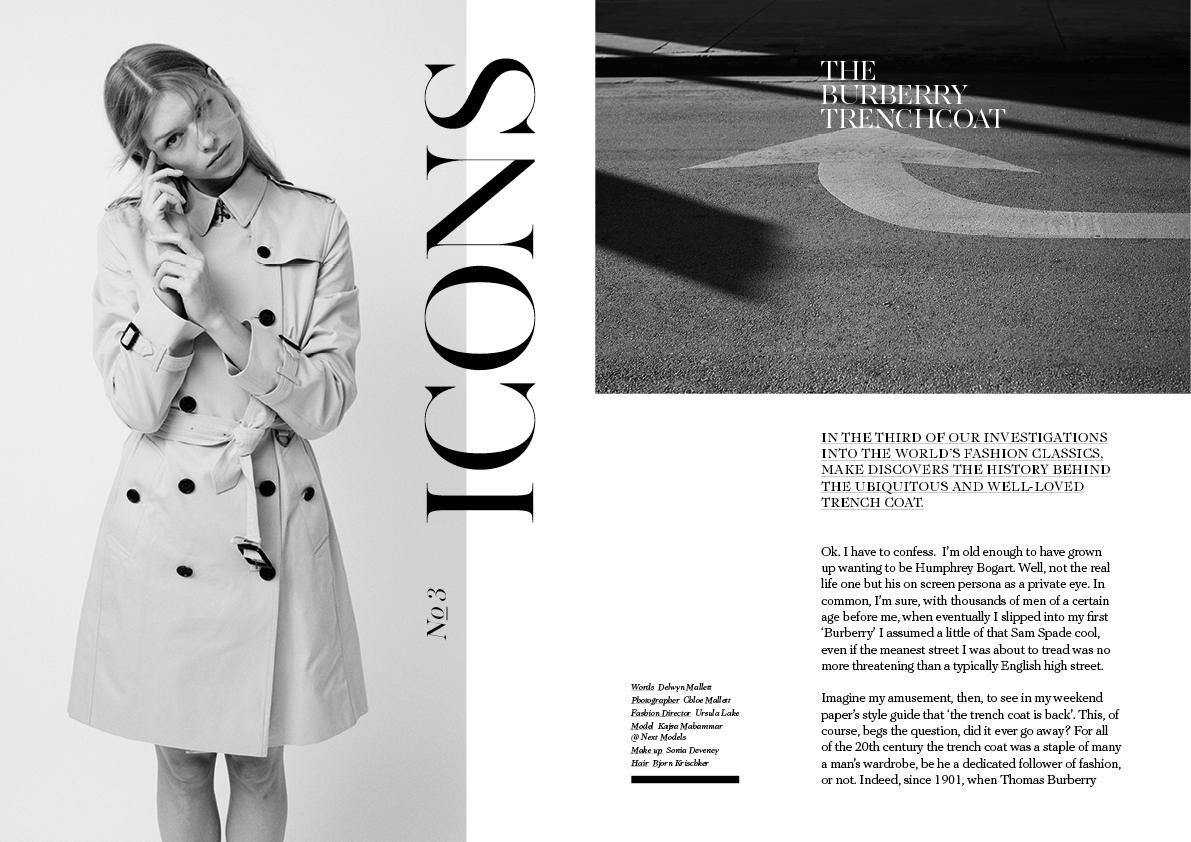 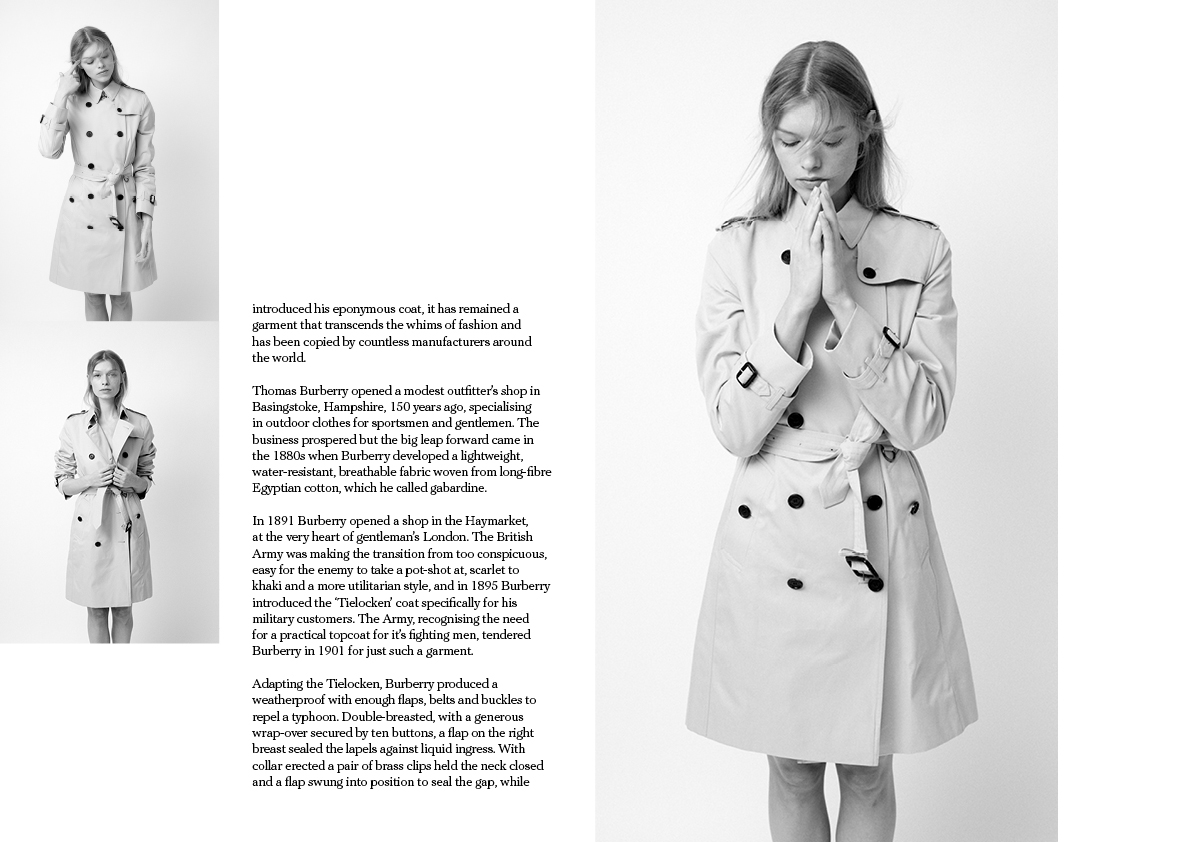 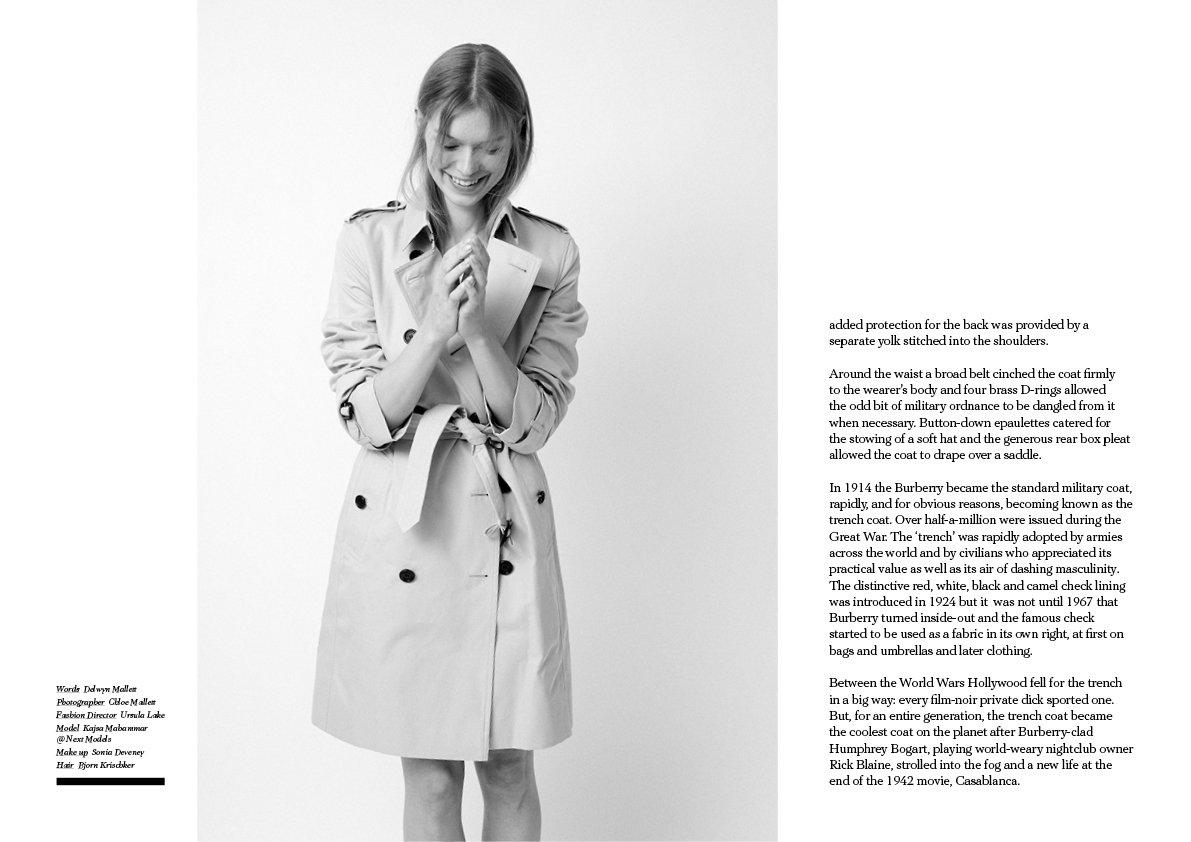