Sell: Rejina Pyo is one of the fashion’s brightest new designers. Make Magazine catches up with her to talk about her new collection, starting a label from scratch and life as a working mother.

Rejina Pyo is one fashion’s fastest-moving luminaries but don’t be too hard on yourself if you don’t instantly recognise her name. She’s a powerhouse that glows quietly, elegantly – rather than fizzes or bangs. If you follow the likes of Yasmin Sewell, Aimee Song, Leandra Medine, Camille Charriere or Pandora Skyes – all Paris-New-York-London cool girls, who favour grown-up style that nods to quirk and wry drama – your thumb may have paused in scrolling to settle on pictures of her clothes on Instagram.

You will have seen her eye-catching bold colours and relaxed silhouettes on FarFetch, Net-a-Porter, Harvey Nichols and Browns, who all rushed to stock her early collections. Yet despite garnering this expanding army of adorers, Pyo only launched her eponymous label three years ago – after a stint working as Roksanda Ilincic’s first fashion assistant, straight after graduation from Central St Martins. She makes artful clothes for real women – collections that don’t rule the red carpet (yet), but quietly dress lovers of fashion who need to work, play and parent in the same clothes. The fashion website Business of Fashion call her clothes ‘deceptively simple’.

Pyo, 34, speaking from her home, where she lives with husband, is just as hushed, talking in a quiet voice as she’s watching over her new baby son, Luka. She’s talks about her start in fashion: As a young child in South Korea, she would watch her fashion designer mother sketch in a book. “She would hide her sketchbooks from me as she didn’t want to encourage me to go into the fashion business, but I would always find them,” she says with laughter in her voice. “There was always fabric in the house and I would drape it around me and stride down the corridor like it was haute couture.”

After graduating from art school in Seoul, Pyo began working at a large Korean fashion company that made clothes for over 40 brands. But designing on that scale became a relentless churn and Pyo turned to London to stretch herself creatively.  “I always dreamed of a bigger world,” she says. The MA course at St Martin’s beckoned and Pyo found herself under the tutorship of the legendary Louise Willson, who died in 2014 at the too-young age of 52.

“Louise taught me right from the start, that if you want something you have to work really hard for it. She was incredibly tough and brutally honest; if she didn’t like your work, she would say it was crap and you were wasting her time. She was very emotionally involved in us students and prepared us for the reality of the fashion industry. Although, I say this all through rose-tinted vision, because at the time, it was so tough it just felt like war: there was lots of crying in corridors.”

Emotional outbursts aside, straight out of college (after collaborating with H&M’s Weekday to sell designs from her graduate show), Pyo went to work for Roksanda Ilincic. Its easy to see why the two found a professional kinship. Both designers love using bold, blocks of colours and are experts in twisting and cutting fabric to create softly feminine pieces that have an abstract twist. “I was very lucky,” says Pyo. “Part of becoming a big brand is that you can’t design as much, can’t be as hands on, because you are travelling the world, speaking to manufacturers and running a business. I had the great fortune of doing the researching, draping, embroidery and sketching for Roksana, while she was off building her company. I had all the fun bits, but I also learned a lot about running a small, studio-based fashion business.”

In 2012, Pyo won the prestigious Han Nefkens Fashion Award (judges included Penny Martin of Gentlewoman and Viktor & Rolf), providing her with a creative platform and – vital for an emerging designer – a large stash of cash to start her own label. It was a risk, leaving an established brand to start up in the notoriously tough fashion industry but, quiet as she maybe, Pyo is made of a steely inner core when it comes to her work.

“You have to have an extraordinary amount of self belief – and an absolute passion for the job,” she says. “To begin with, there is no money, no time, no help. And then you get three stockists, and the next year you might build that to twenty. So you hire someone part-time to help you, and then you take them on full-time and hire someone else.” Some talk about Pyo like she’s a new sensation, but for her the process was “very organic, very slow”.

Pyo says that she admires many great designers and never thought that she might be able to build her own label in the way that she has been able to. “I aim to design elegant but effortless clothes that aren’t too showy. I want my clothes to be accessible but also I’d like my customers to invest in craftsmanship. I hate being wasteful – so I create pieces that women will want to keep. My dream is to design clothes that are so loved that they are passed down to the next generation, or kept as someone moves from house to house. I’d love my pieces to become vintage pieces.”

This sense of nostalgic sentiment has coincided by the arrival of her little Luka. Despite the long hours need to start her own label, and initial concerns that it’s possible to grow a business and be a mother at the same time, Pyo says that having a baby has made her better designer. “Before Luka came along, my work completely ruled my life but after having him, I have a more balanced approach. Once you have kids, your boobs get bigger, your waist moves, and you also need clothes that are functional as well as beautiful. My vocabulary for designer is wider now – I think outside what I used to. I was pushed outside my comfort zone in terms of my understanding of what a woman’s body is, and that has helped enormously.”

Throughout her pregnancy Pyo says she reflected on the many roles of womanhood – mother, wife, friend, daughter, artist, businesswoman, and draw inspiration from all these different facets. The balance between light and dark, soft and hard, excitement and stillness were all used to create a vibrant palate of citrus and fuchsia paired with earthier tones of orange and khaki, and crisp sharp white were all explored in her AW17 collection. Statement dresses sit next to wide-leg denim, crushed pale pink velvet next to orange corduroy.

So attuned is Pyo to her designs that she can’t really fathom wearing any other label. “It feels a huge privilege to be able to influence my designs to such a small detail; to get a sense of how my clothes feel by wearing them myself. If something feels too overdressed, I can adjust it – make a bow smaller. Or let out a waist so it feels less fitted and formal. I never buy other people’s clothes.” Although she confesses, if pushed, she’d go for early Commes des Garcon, if she came across a piece in a vintage shop. “It’s a wonderful thing to be able to open your wardrobe and think, everything in here is exactly as I would like it.” And quietly, surely, you know that she’ll get her own way. Exactly as she would like it. 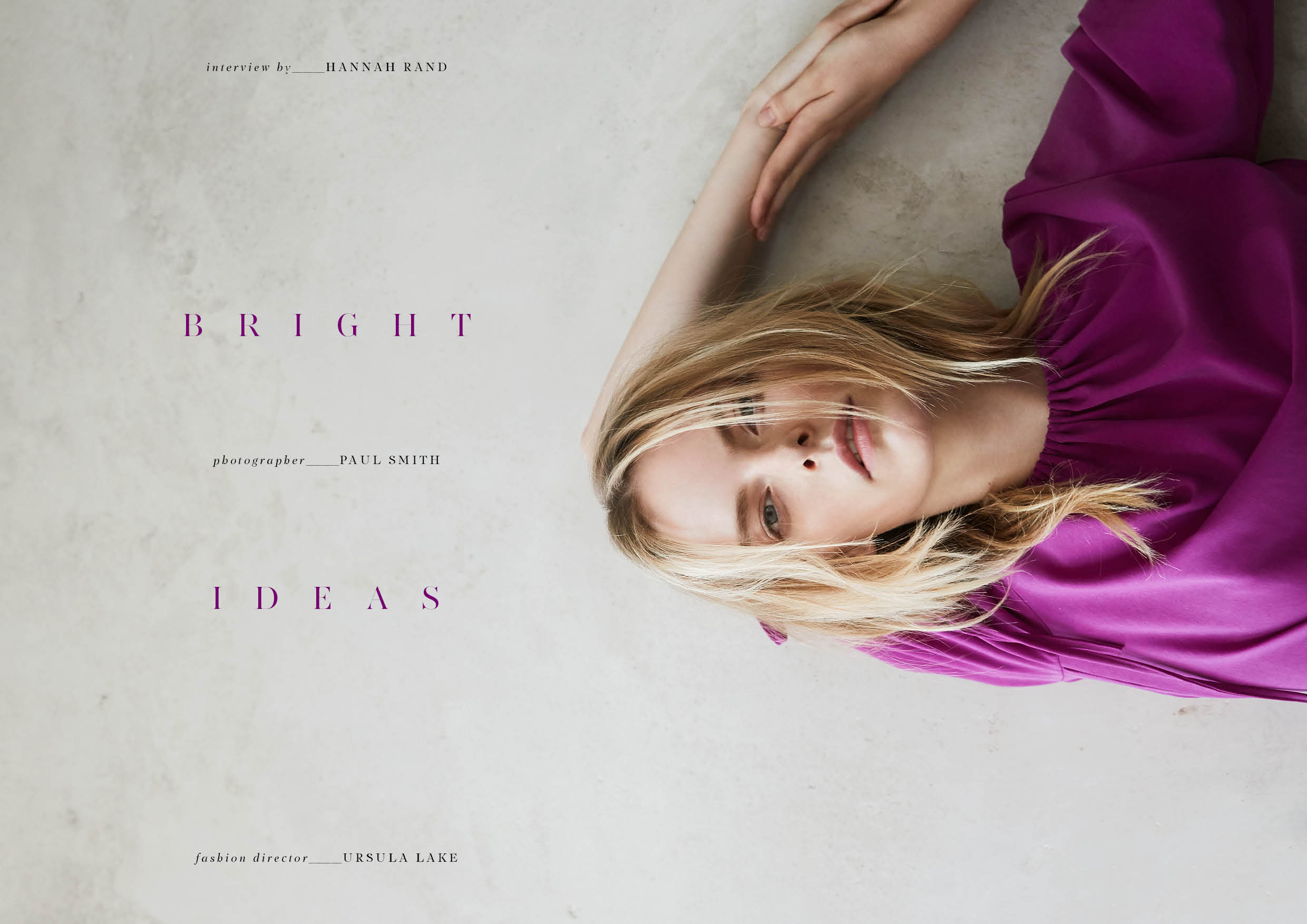 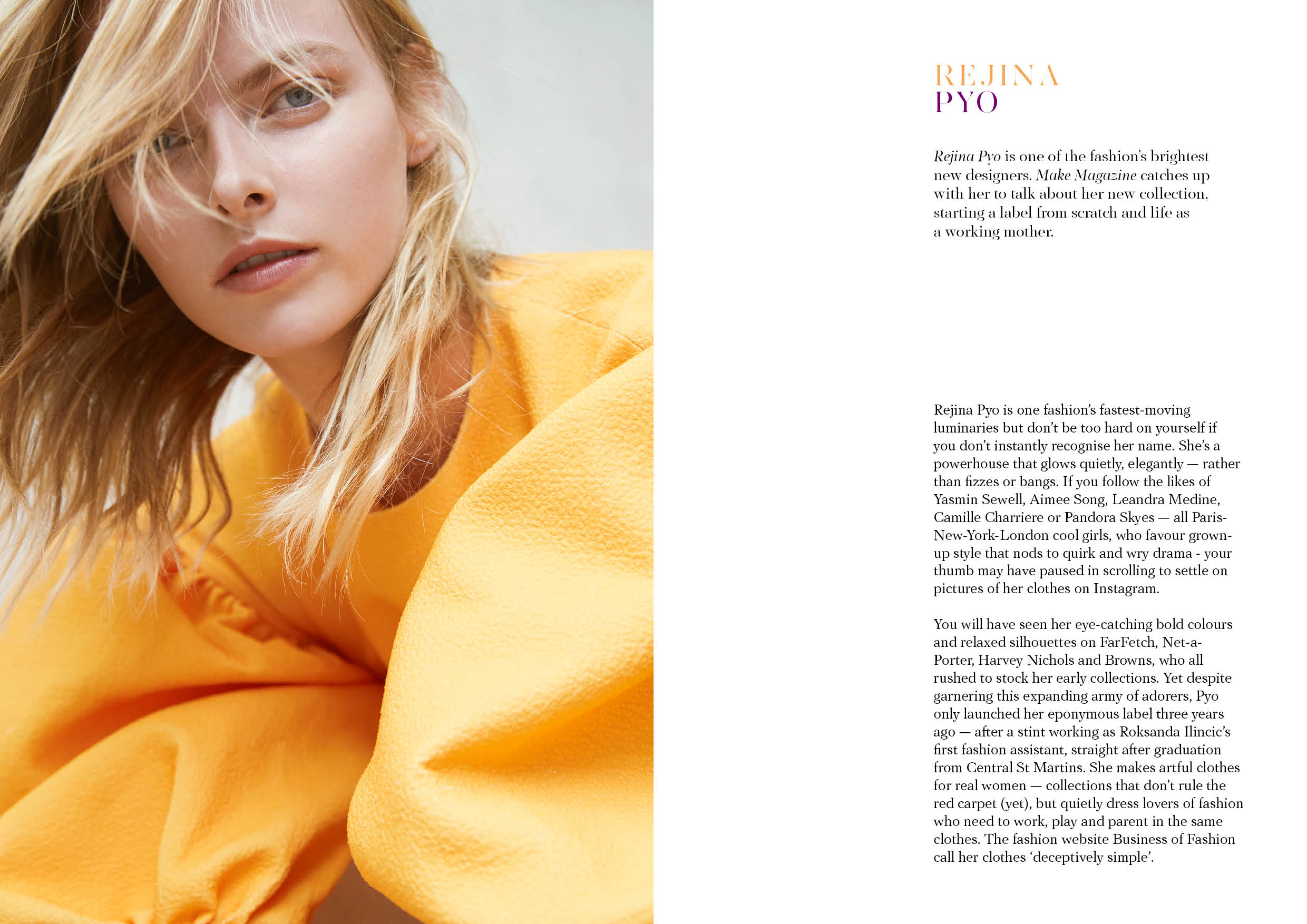 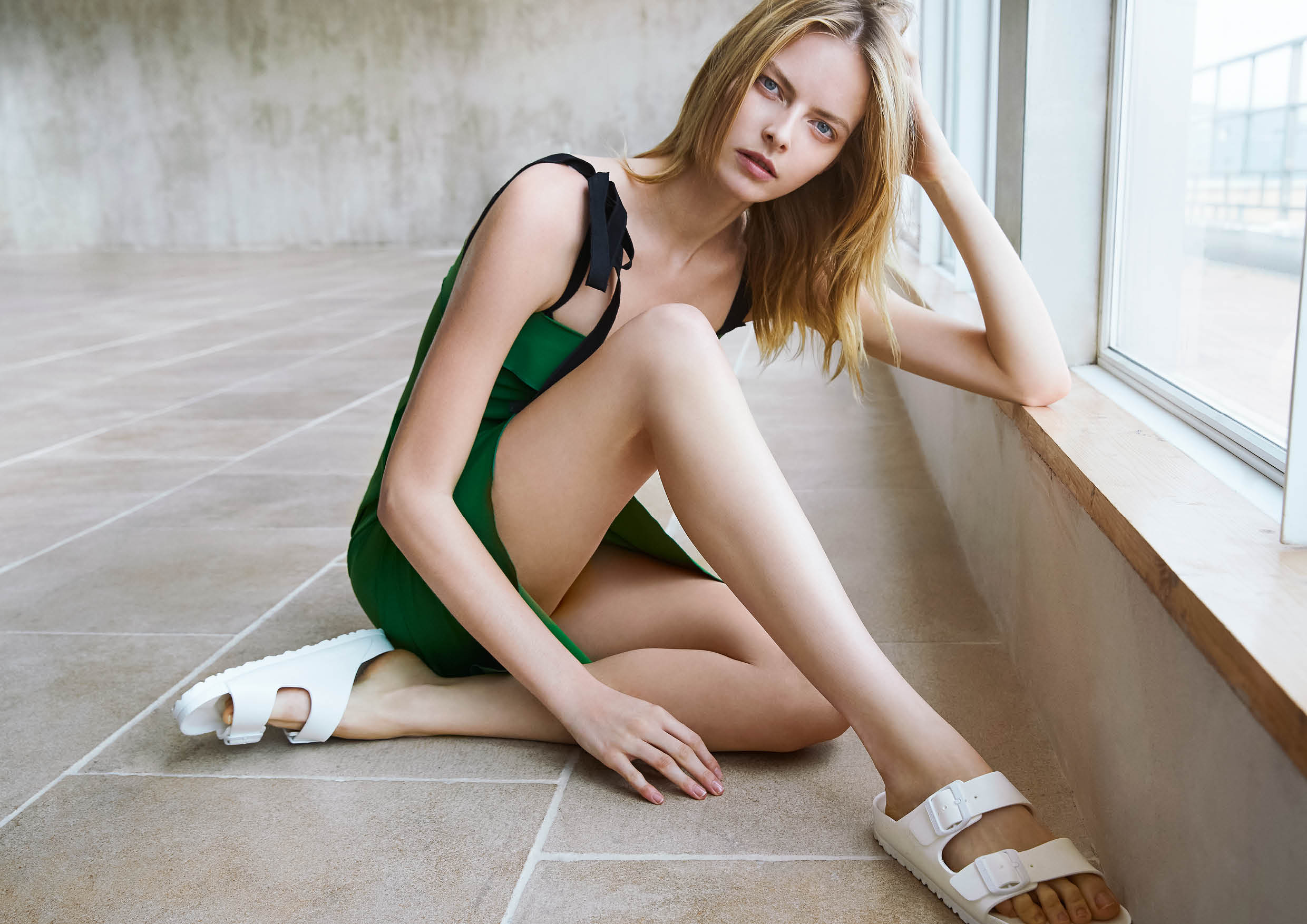 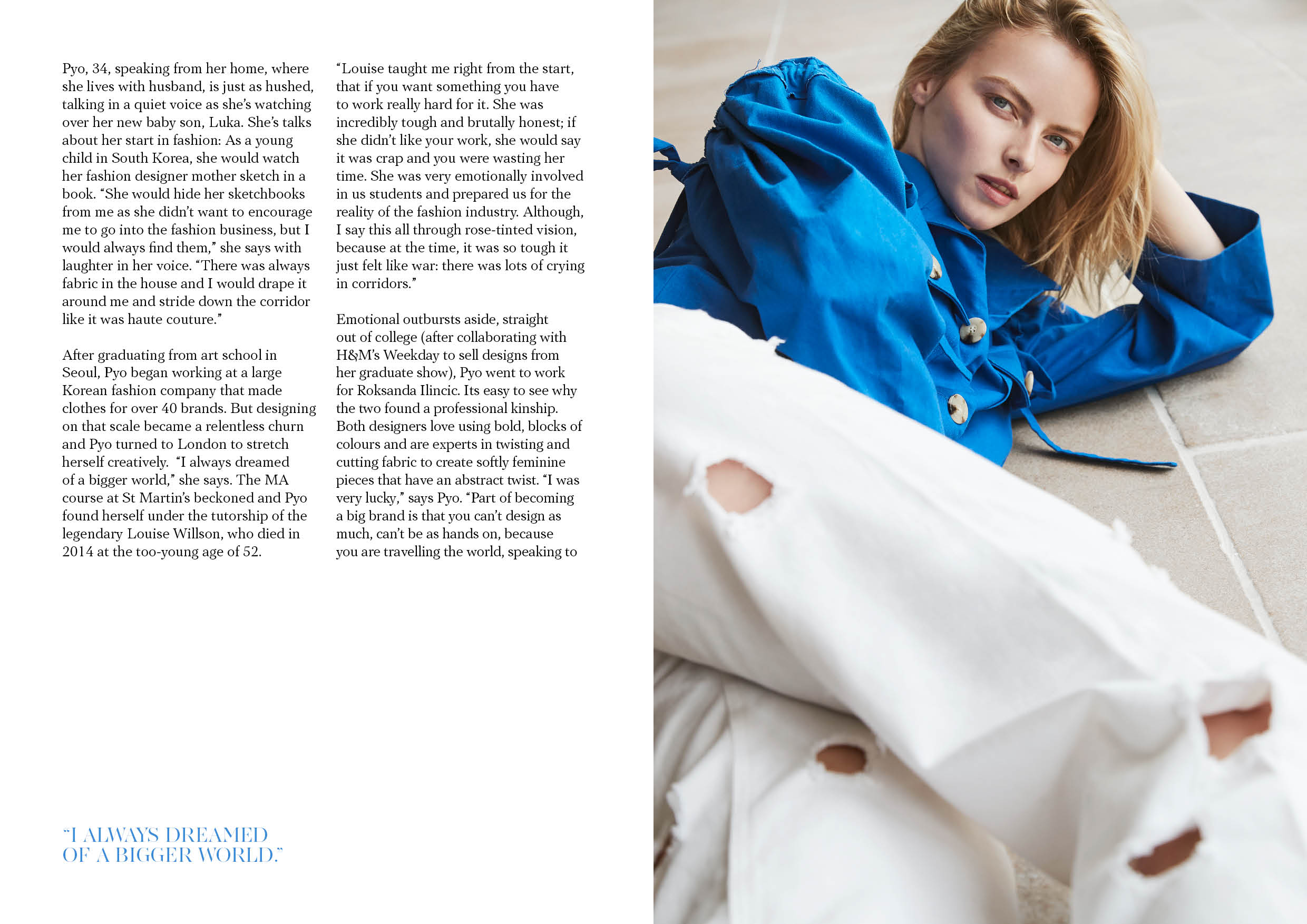 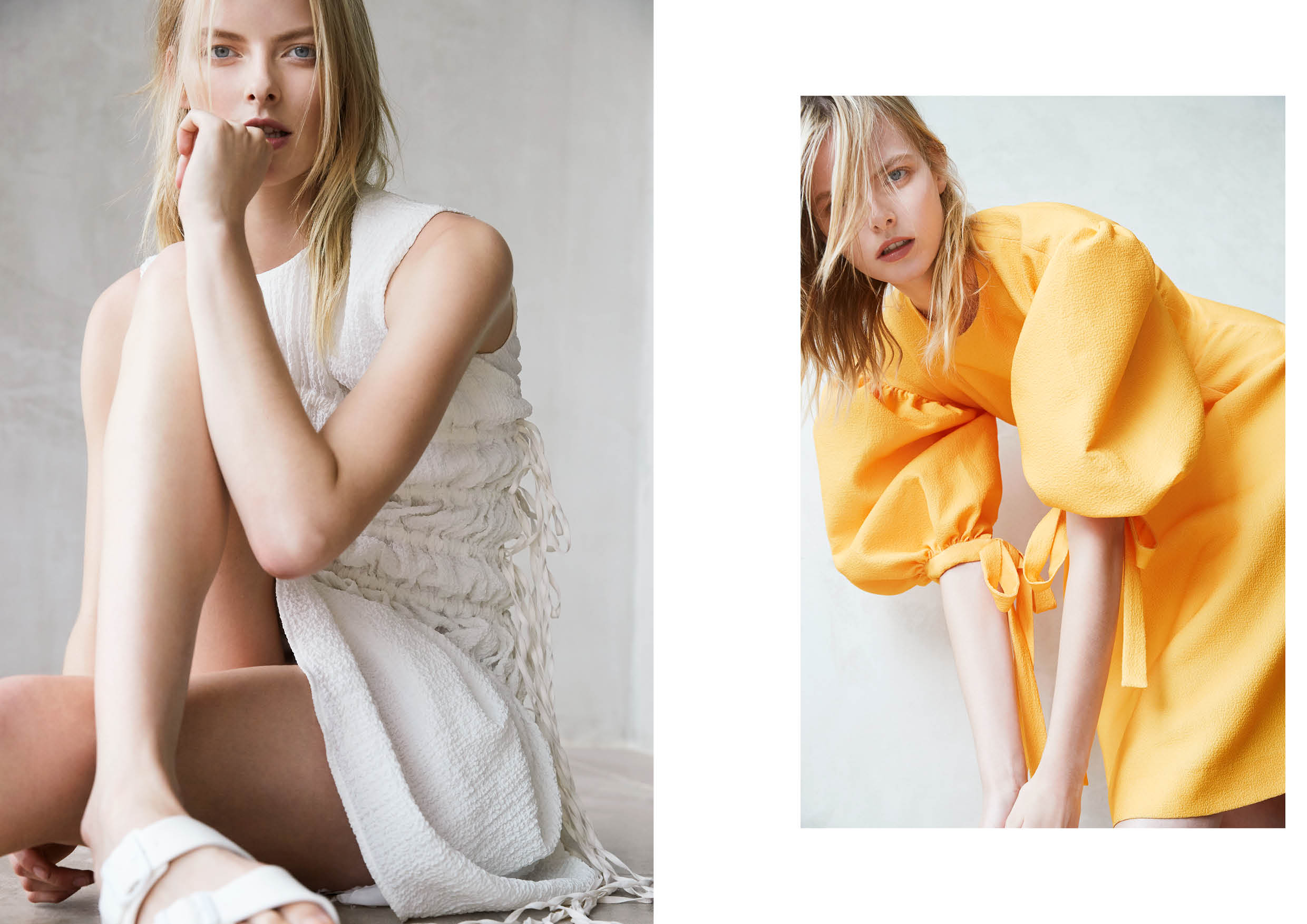 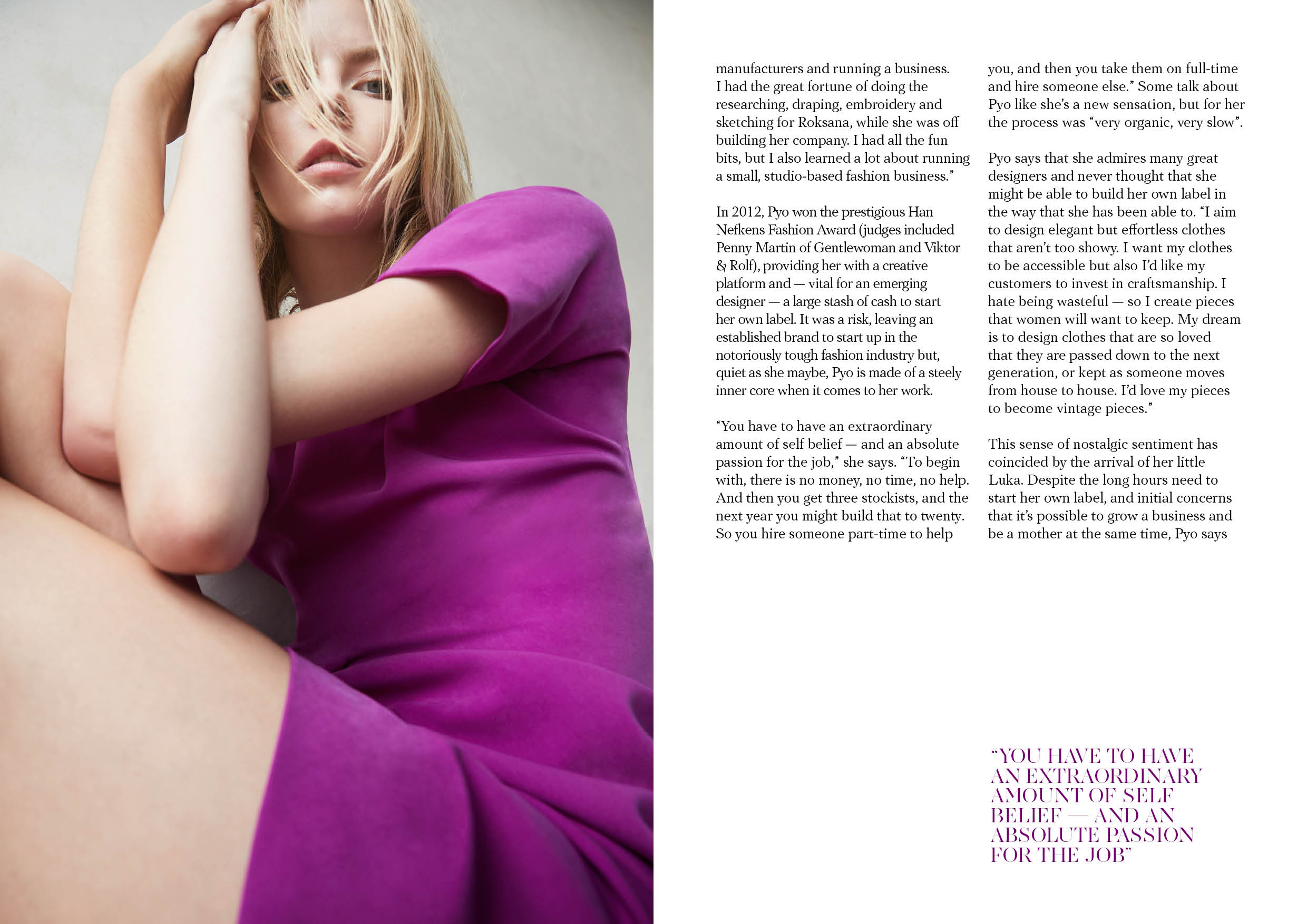 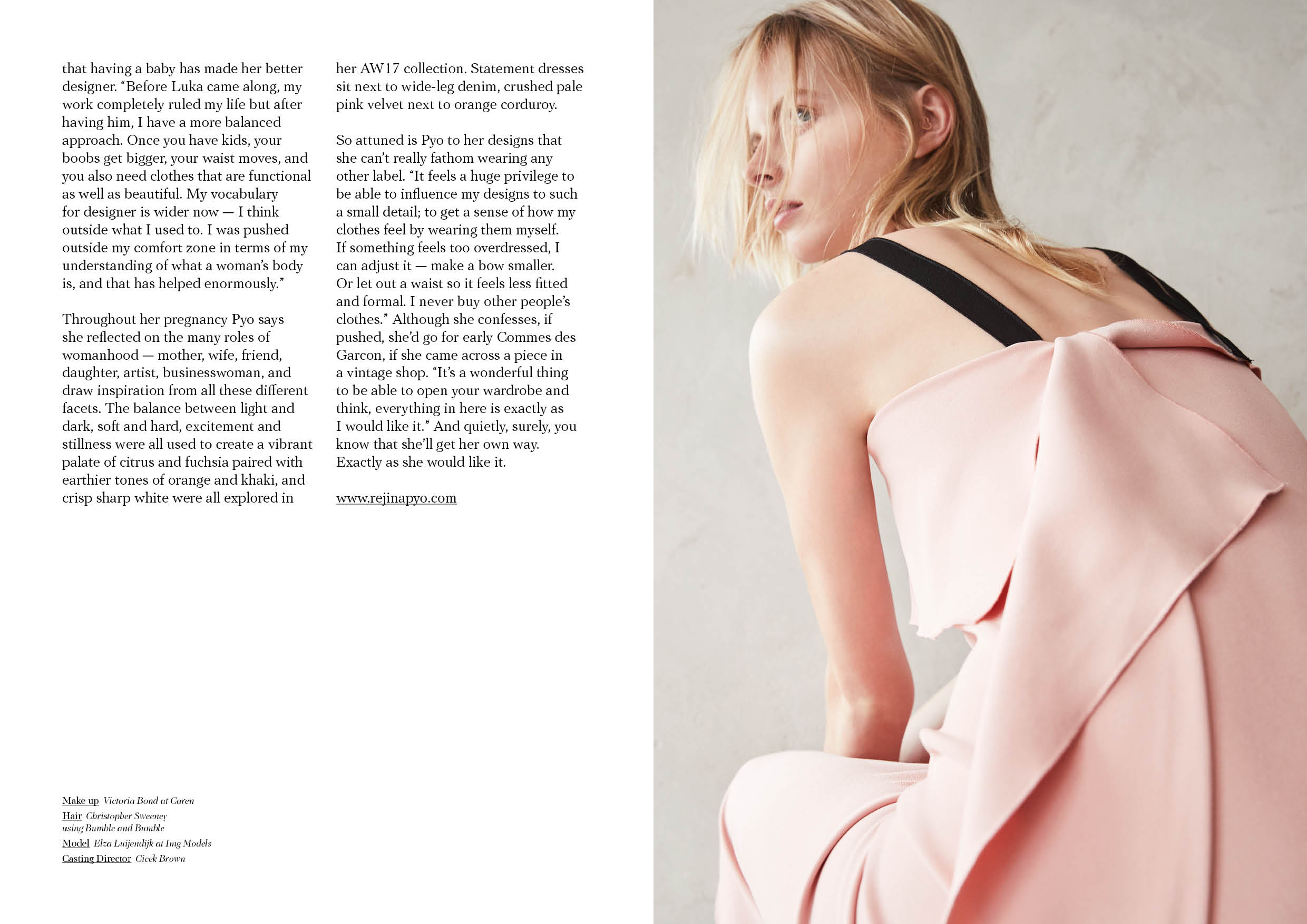