In our seventeenth issue, we discuss the legendary Coke bottle, maybe the most iconic bottle of all time.

A century ago the first thirst-quenching satisfying swig was enjoyed from what would rapidly become the most universally recognized item of product packaging the world has seen – the 6.5 oz Coca-Cola ‘contour’ bottle.

Raymond Loewy, the famed industrial designer often referred to as the ‘father of modern design’, was retained by Coca-Cola in the 1940s to apply his flair to their vending machines, which led to the misconception that he had also designed their distinctive bottle. The bottle in fact preceded Loewy’s involvement by three decades and he was vocal in his praise for its timeless design, proclaiming that, ‘The Coke bottle is a masterpiece of scientific, functional planning. In simpler terms, I would describe the bottle as  … the most perfect ‘fluid wrapper’ of the day and one of the classics in packaging history.’

By the 1880s the drugstore soda fountain, dispensing syrup-flavoured carbonated iced drinks, had become a much-frequented fixture on every American main street.

In 1886 John S Pemberton, a pharmacist in Atlanta, concocted his own caramel-coloured liquid and took it for a test run at the soda fountain in the nearby Jacob’s Pharmacy to see how the locals would react. They liked it. A lot. Pemberton’s bookkeeper, Frank Robinson, named it Coca-Cola because he liked the phonetic ring of the double ‘C’ and wrote out the name in Spencerian script – the accepted writing style in the US for business correspondence before the advent of the typewriter. (Ford is another world-famous logo based on the script.)

Towards the turn of the century Coca-Cola’s popularity saw it being dispensed from soda fountains across America when, in 1899, two entrepreneurial Chattanooga lawyers bought the rights to bottle the beverage.  The new Coca-Cola Bottling Company began franchising the rights city by city, which led to bottling anarchy. Different franchisees chose to use different shape bottles, while the success of the drink also led to dozens of imitators, with names like Koka-Nola, Toka-Cola, Koke, and, more successfully, Pepsi-Cola, jumping on the cola bandwagon. The Coca-Cola Bottling Company finally persuaded their many franchisees that it was in their interest, individually and collectively, to settle on a single distinctive design and in 1915 a tender was issued. A number of glass companies were asked to develop a ‘bottle so distinct that you would recognize it by feeling in the dark or lying broken on the ground.’

The Root Glass Company of Terre Haute, Indiana, sent two employees to the local library to do a little research and while browsing the Encyclopaedia Britannica, under the misapprehension that the drink contained ‘cocoa’ rather than the more potent ‘coca’, they found inspiration in an illustration of a cocoa bean pod with its elongated shape and distinctive ribs. Under the direction of shop foreman Alexander Samuelsson, a Swedish immigrant, the pod drawing was translated into glass. Clear winners in the contest the bottle was patented and a packaging phenomenon was born. Regularly renewed over the years the patent finally expired in 1951 but Coca-Cola argued that as 99% of Americans could recognize the bottle by its shape alone it should be granted trademark status, which duly occurred in 1961.

In the sixties, the ubiquity of consumer goods made them a favoured subject for the Pop Art movement and in 1962 Andy Warhol started silk screening multiple images of the Coke bottle onto canvas, prompting him to declare ‘What’s great about this country is that America started the tradition where the richest consumers buy essentially the same things as the poorest.  A Coke is a Coke and no amount of money can get you a better Coke than the one the bum on the corner is drinking.’

Coca-Cola’s global success had made it a powerful American cultural symbol and in 1971 a Coke commercial featuring a bottle-holding multi-ethnic choir caught the spirit of the age with their hillside rendering of ‘I’d like to Teach the World to Sing (In Perfect Harmony). A noble ideal, sadly yet to be fulfilled. 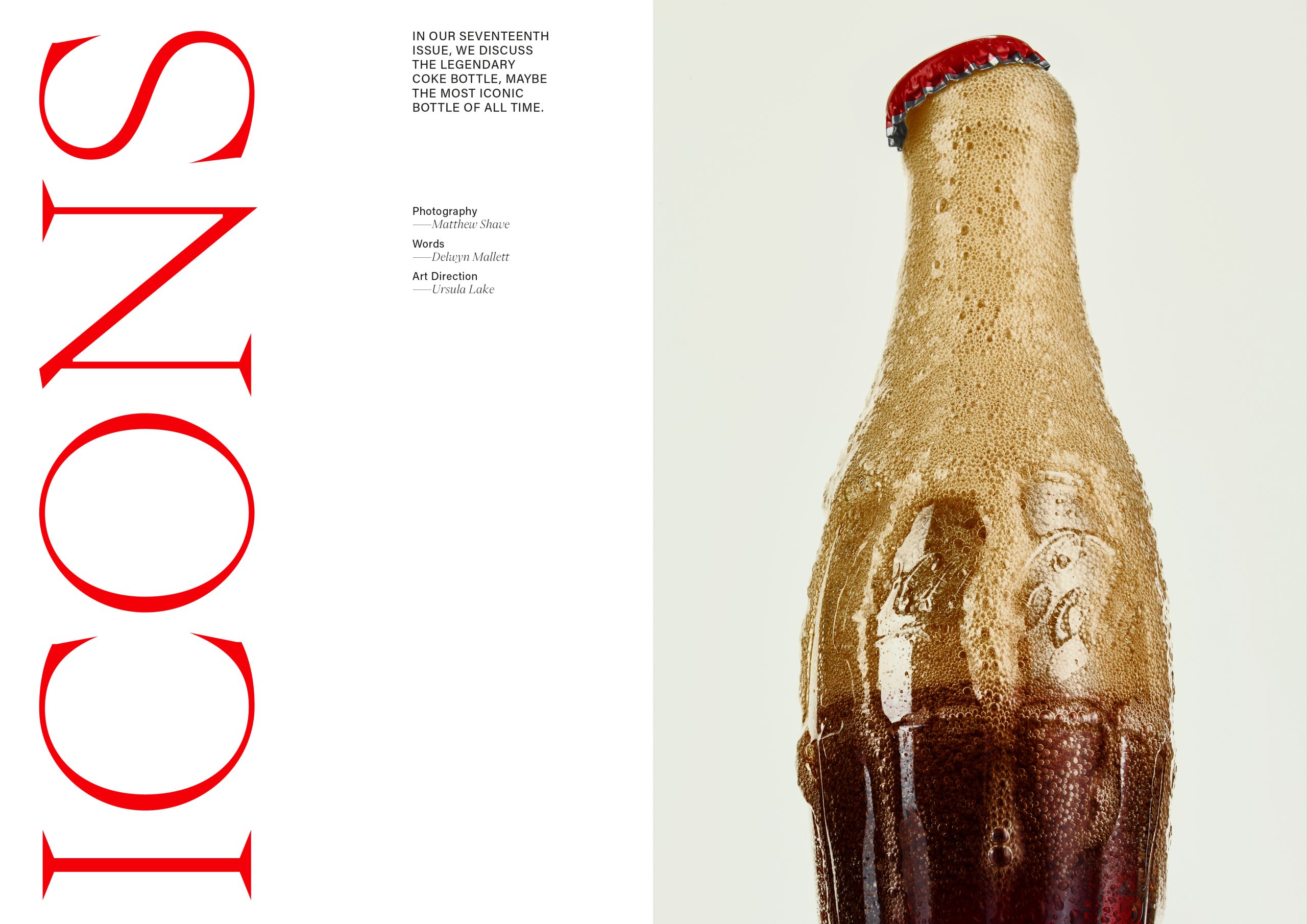 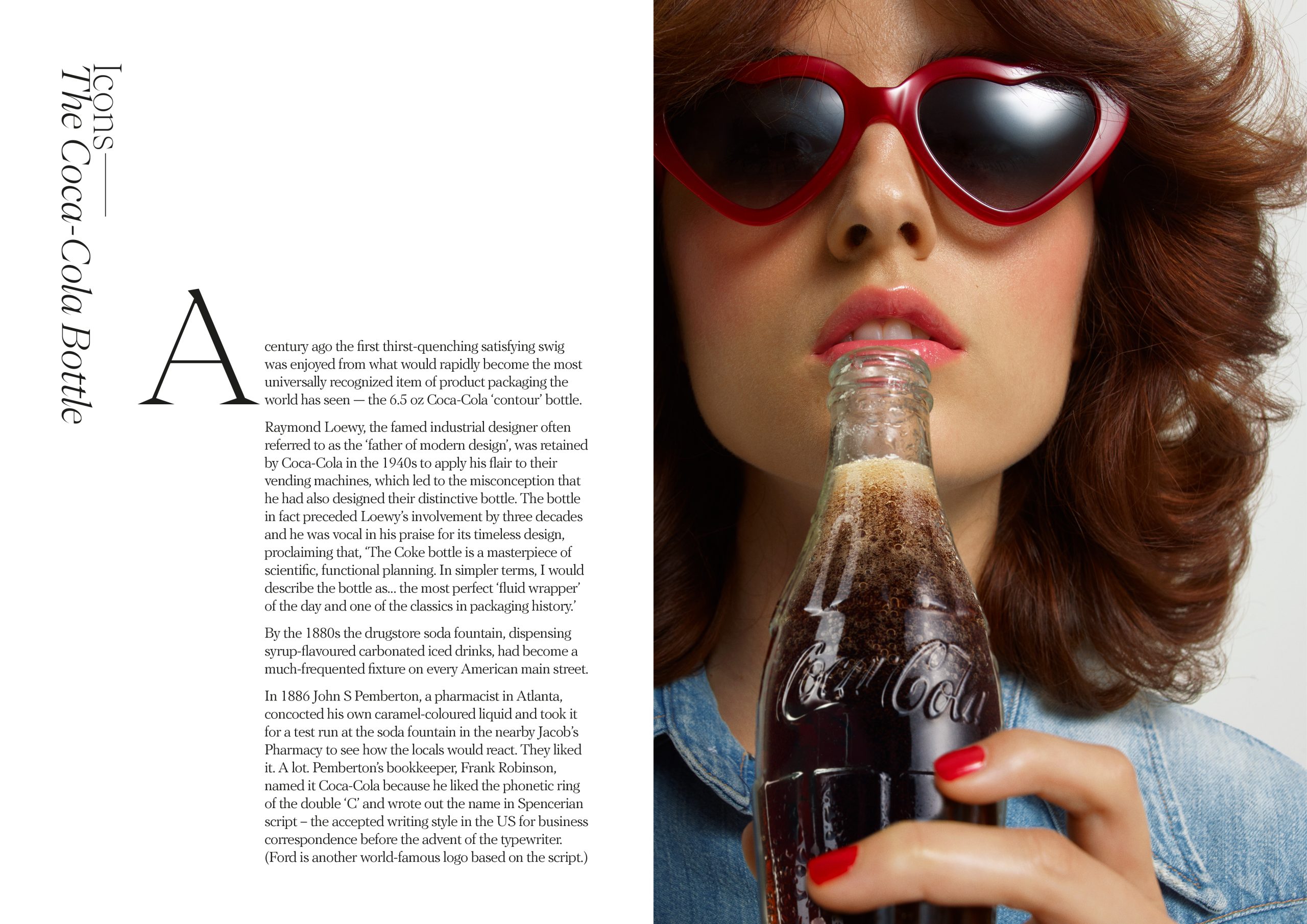 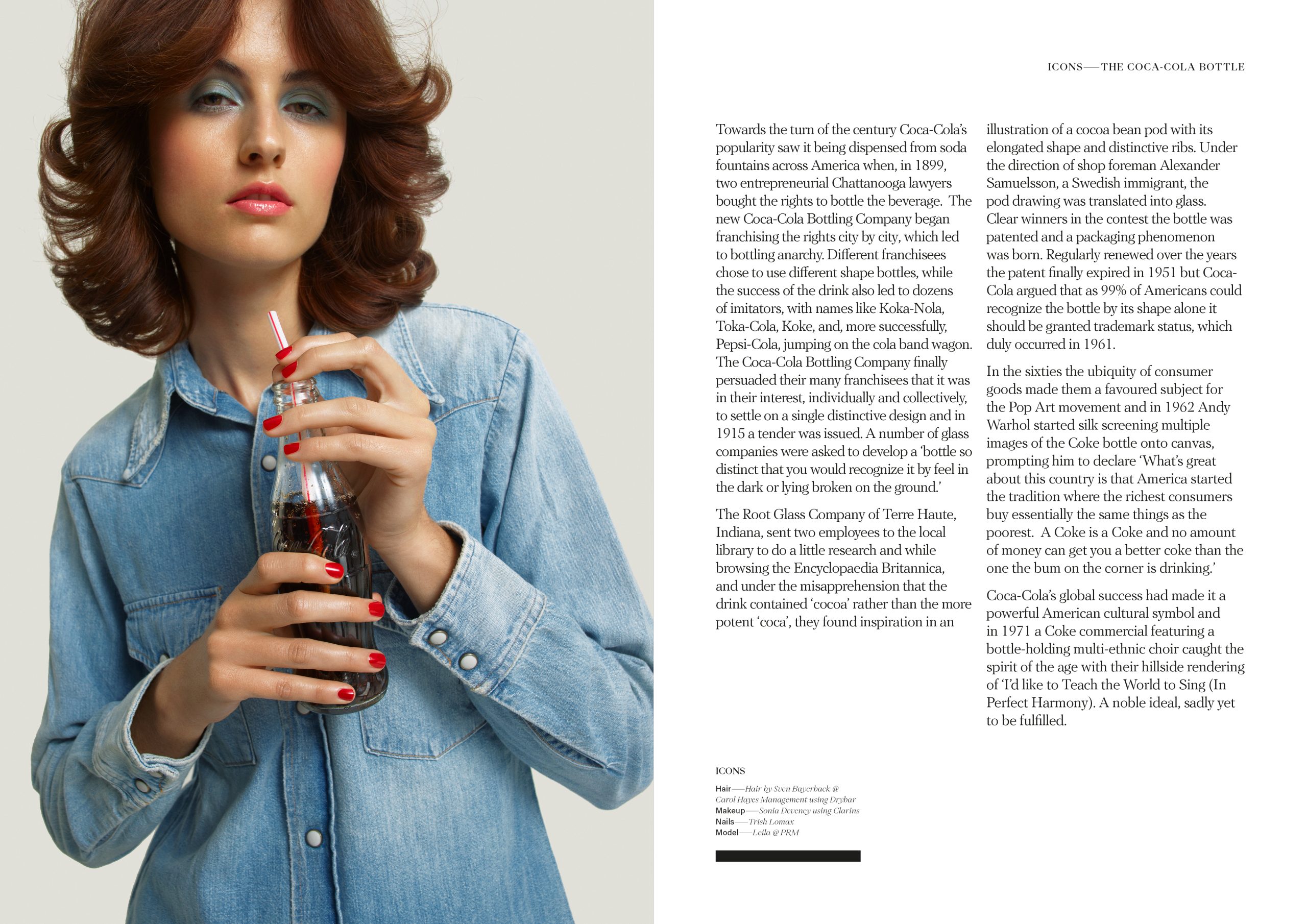 A denim shirt by J Crew