Make was thrilled to meet up with the very lovely (and very tall) British actress Natasha Culzac for the summer issue of Make to chat about her latest role, playing the deadly killing machine, Spartan Riz-028 in the TV adaptation of Halo.

Q. Can you tell us a little bit about your childhood and how the dream of acting evolved?

A. I was the type of child that made my parents suffer through a programme of DIY performances on Saturday evenings, usually during the National Lottery show. Poor sods. My love for performing evolved as I got into my teenage years, though. As I became a bit more self-conscious, deep-thinking emo.  I wasn’t really into the all-singing/all-dancing type of entertainment anymore, but rather enjoyed the escapism of simply acting. However, when I was looking at drama schools, it became apparent that I wasn’t going to be able to afford what appeared to be a frivolous dream. I decided it probably wasn’t for the likes of me and instead thought I better pursue something more stable.

I always enjoyed writing and current affairs (randomly at 16 I set up my own work experience at the local newspaper) so veered in that direction. After a bit of fart-arsing around, I eventually got my degree in Journalism at age 25 and went on to work as an online news reporter at a couple of national newspapers. In the end, though, it didn’t wholly satisfy me and I left. I went to work for a homeless charity in their marketing department and around the same time also started modelling for some extra cash. That cash eventually got me out of debt and I was also able to put some of it into acting lessons. I was turning thirty and erroneously thought if I didn’t give it a go at that point, then it would be too late. Something about my ‘soon being beyond my sell-by date’. Of course, I quickly learned that all that is utter nonsense.

Q. We are loving Halo! How fun is it playing a character that is so far removed from your own personality? (We can tell from our shoot that you are fairly far-removed personality-wise from a deadly warrior!)

A. It’s extremely fun! With Riz, I’m getting to explore traits I probably don’t allow myself to in real life – like stillness. Or yeah, being a feared and fearless war machine ha! It’s also been illuminating jumping into the world of fitness. I have to admit I wasn’t particularly fit before I landed Halo, so I had to do a 180-degree turn on that front. I had to find a way to enjoy it and thankfully I managed that because it’s now a huge part of my life. I used to drive past runners and scoff at them for choosing to do that in their spare time. I just didn’t understand it. Now I’m that person. It’s weird.

Q. For those who haven’t seen Halo, can you describe your character Riz-028?

A. Riz-028 is an elite super-soldier. She’s an augmented, rigorously trained, indoctrinated, highly-adaptable killing machine. Those in the Spartan II programme were stolen as children (at age 6) and trained by the government to become extremely valuable pawns in the game of war. Specifically, Riz wields two Magnum Pistols and is specialised in close-combat fighting. She’s also the Comms specialist and someone in another life I think could be the party starter! But I mean as you’ll see in Season one, Riz’s main concerns are the mission and following orders. I think her unwavering stoicism also translates into her being fiercely loyal. She’s one-quarter of the Silver Team and her fellow Spartans are her family; she’d do anything to help and protect them.

Q. Is your character in Halo the game? And how much scope did you have to flesh out the character and make it your own?

A. Without getting too technical, within Silver Team only Master Chief has an established history from the game. Riz, Kai and Vannak are kind of new characters, except they do exist in 343i’s (the game’s developer) rich Halo-lore, but just hadn’t been introduced as part of the game yet. Because of that, I felt pretty free to make Riz my own and flesh out who she is as a person, not just as a fighter.

The aspects of her as a soldier were already mapped out, her being extremely fast, nimble and the close quarters combat specialism. But then I found it fun also looking at the person underneath the armour. I jumped on small details in the script that described how Riz maybe wasn’t technically “as good” as the others at some tasks or games. I tried then for this to feed into her psyche just a little, this ultra-capable warrior who, without realising, might have a slight complex about being the worst of the group, even though she isn’t necessarily. She’s the shortest of the four Spartans, too, so I played around with the idea that there was a “youngest sibling” vibe going on with her.

Q. Are you a gamer? Were you a Halo fan?

A. I was a gamer-‘lite’ as a teenager I suppose and had a chipped Playstation, which is ironic in retrospect! But then when I discovered drinking, gaming sort of went to the wayside! Halo is such a highly loved game so of course, when I went for the role I knew of it. I went deep into the research for my audition as well as afterwards when I got the role.

Q. How much green screen work was it? Was it hard working under those constraints?

A. There was a fair amount of green/blue screen work but actually the art department, props, costume, that whole side of it was so incredibly detailed and ornate that a lot of the time we didn’t need to pretend. For the times when we did need to pretend, it was just about making sure we were all looking at the same tiny dot at the right times. To be honest, my imagination is pretty vivid so I can trick myself into believing almost anything!

Q. Did you gain a lot of fans because of the connection to Halo, or any negativity from Halo fans?

A. It’s been amazing connecting with Halo fans across the globe. Seeing their dedication, passion and also their excitement has been a real treat. I’ve always wanted to make them proud, so it puts a huge smile on my face when I get nice messages.

Q. What is your dream acting role or collaboration?

A. I think I have two dream roles left after ‘super-soldier’, which has, let’s be honest, been a dream come true. The first is a Bond villain. The second is some wistful Victorian in an old-school Period drama or rom-com. I LOVE period dramas, I don’t know why, maybe it’s the escapism again but this time to the past. I find it all so romantically tragic.

Q. What is next for Natasha Culzac?

A. I think I’d like to start giving screenwriting a chance and finally bring to life some of the stories that I’ve had bubbling away on the back burner lodged in the deep recesses of my brain.

Q. The theme of this issue is Hope, what gives you hope?

A. Our tenacity and strength give me hope. Our desperation to survive gives me hope that we’ll find a way to inhabit this planet nicely, with care and thought, for future generations. Everything passes, and that too gives me hope, because it means that there is a constant renewal and opportunities for the bad things to end.

You can see Natasha Culzac in Halo on Paramount Plus or Amazon Prime. 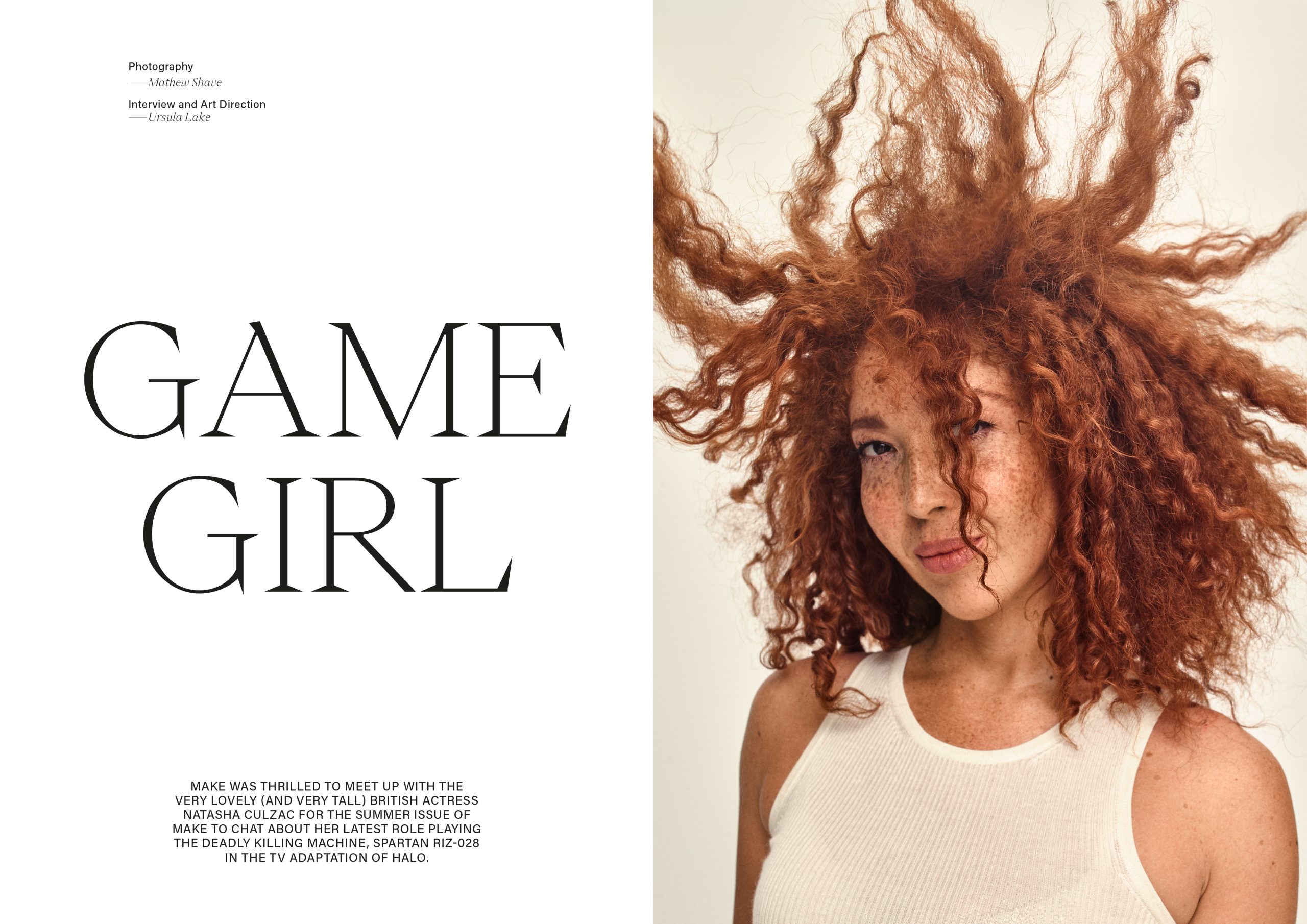 Vest by Raey at Matches Fashion.com 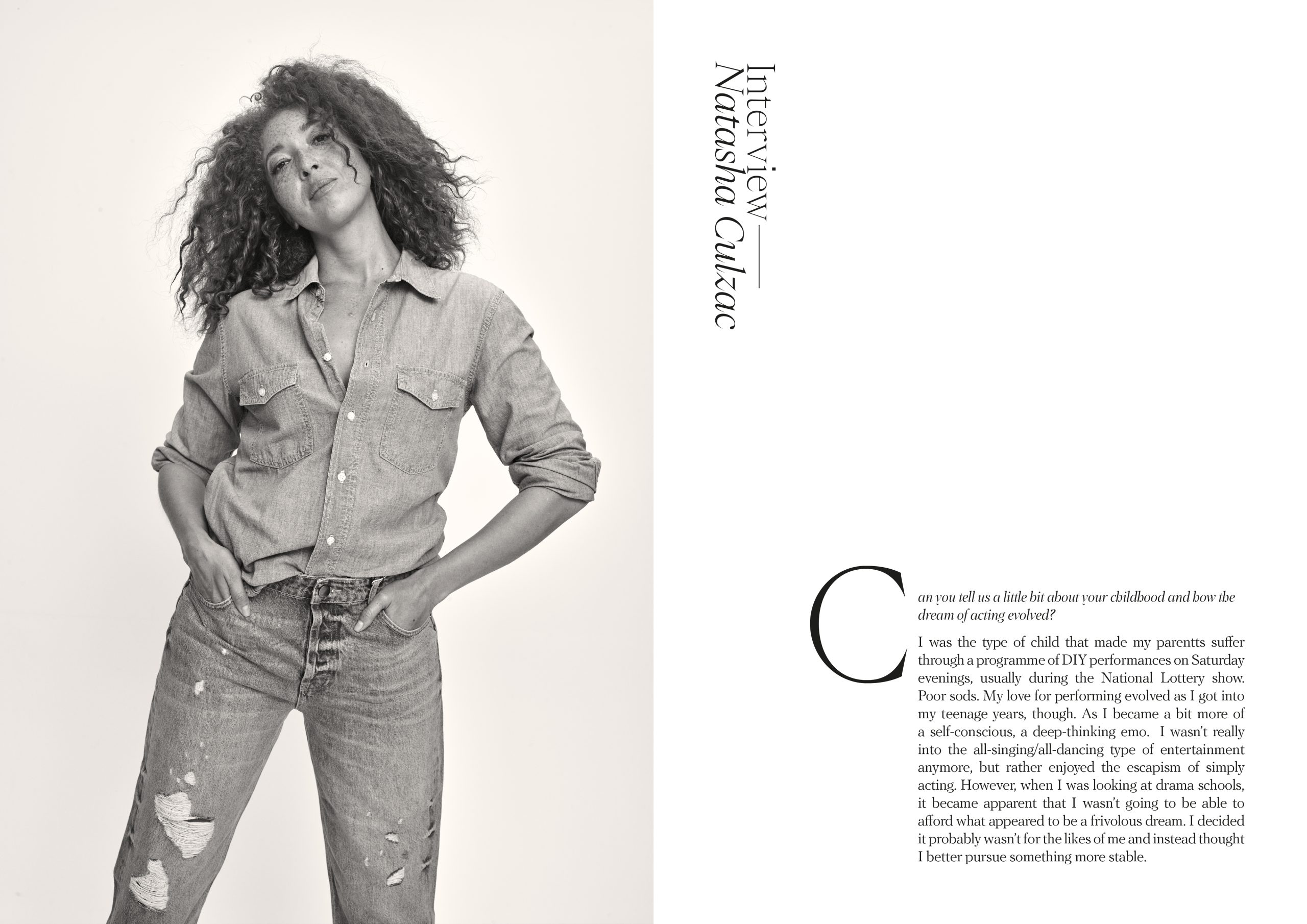 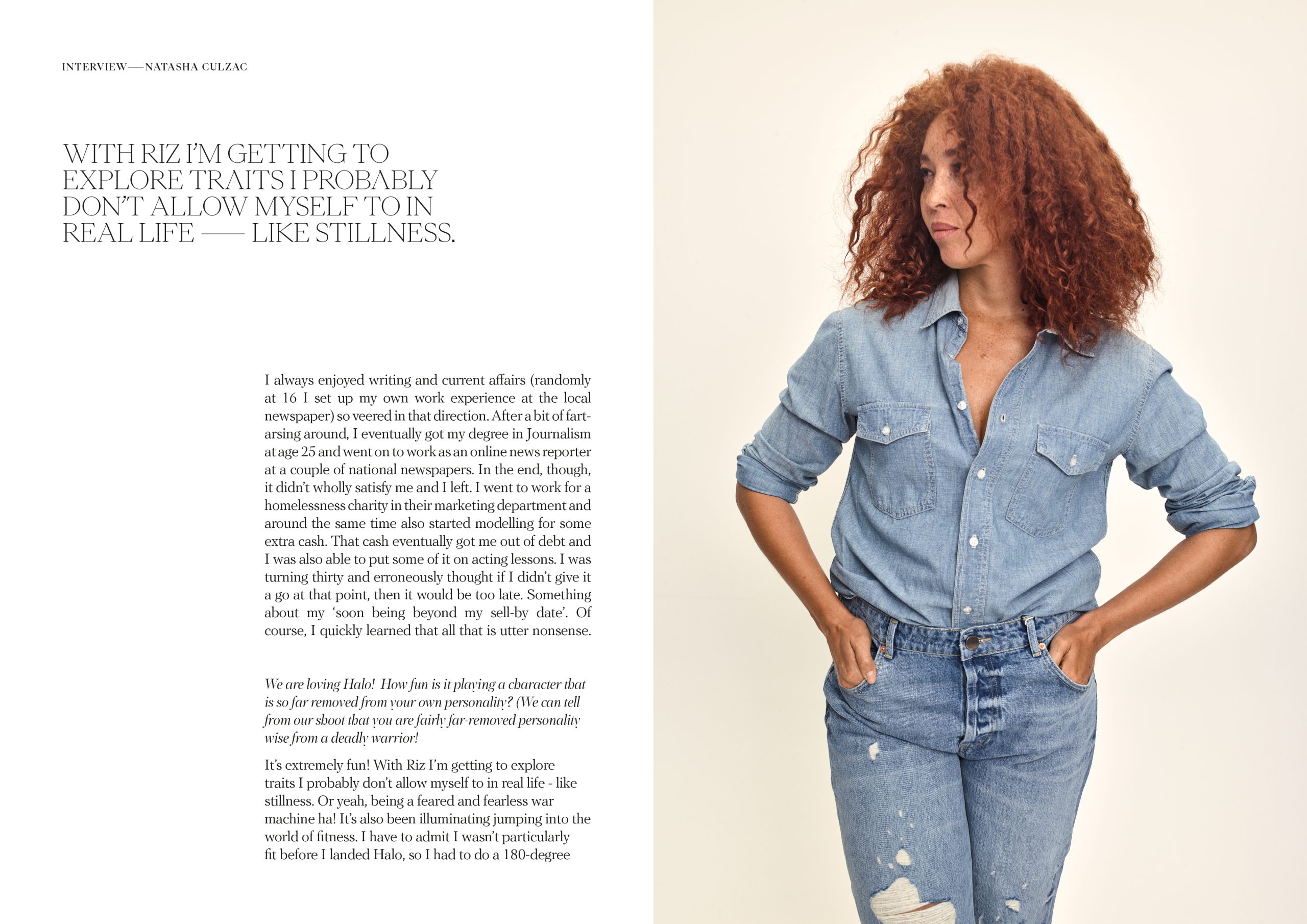 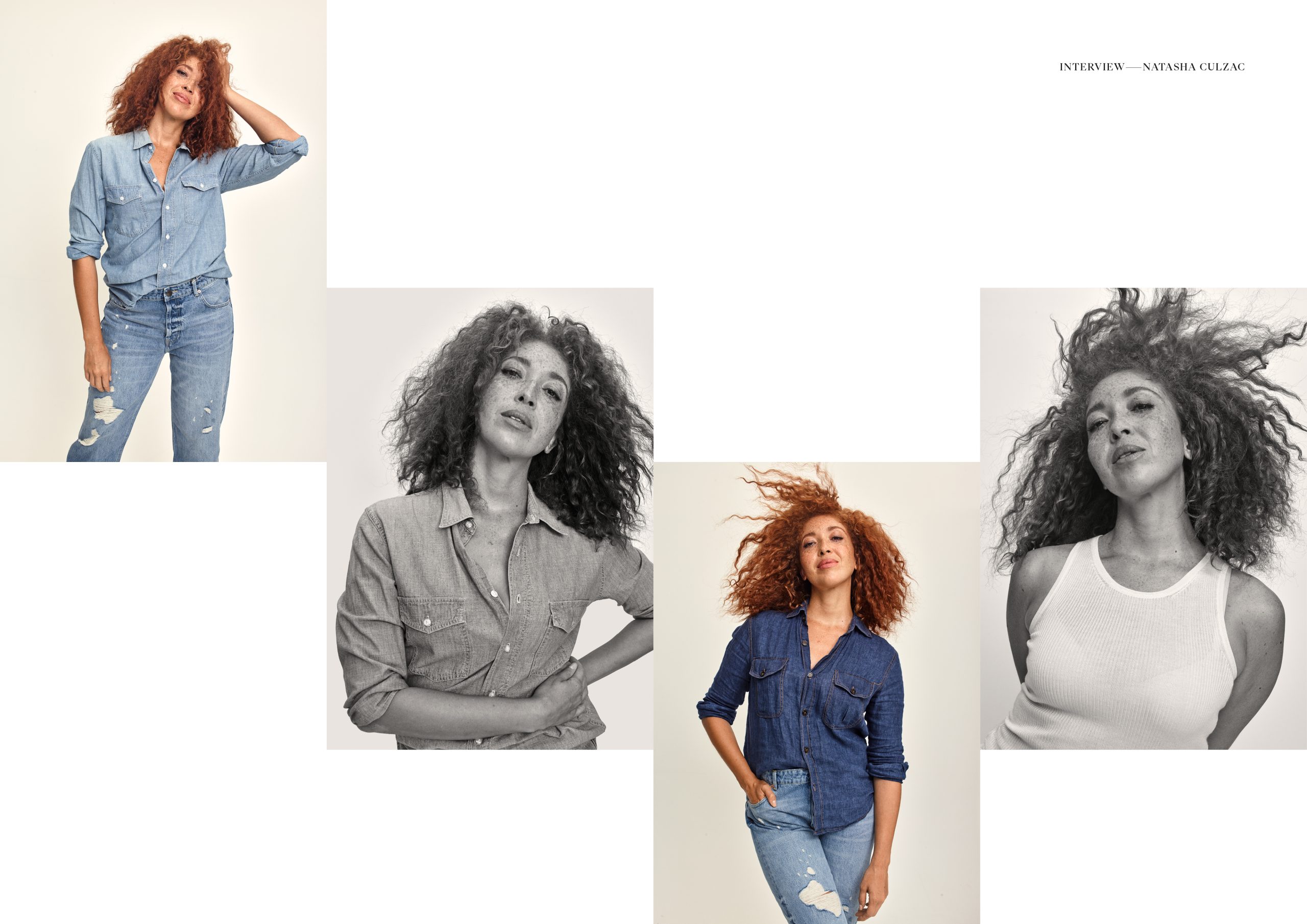 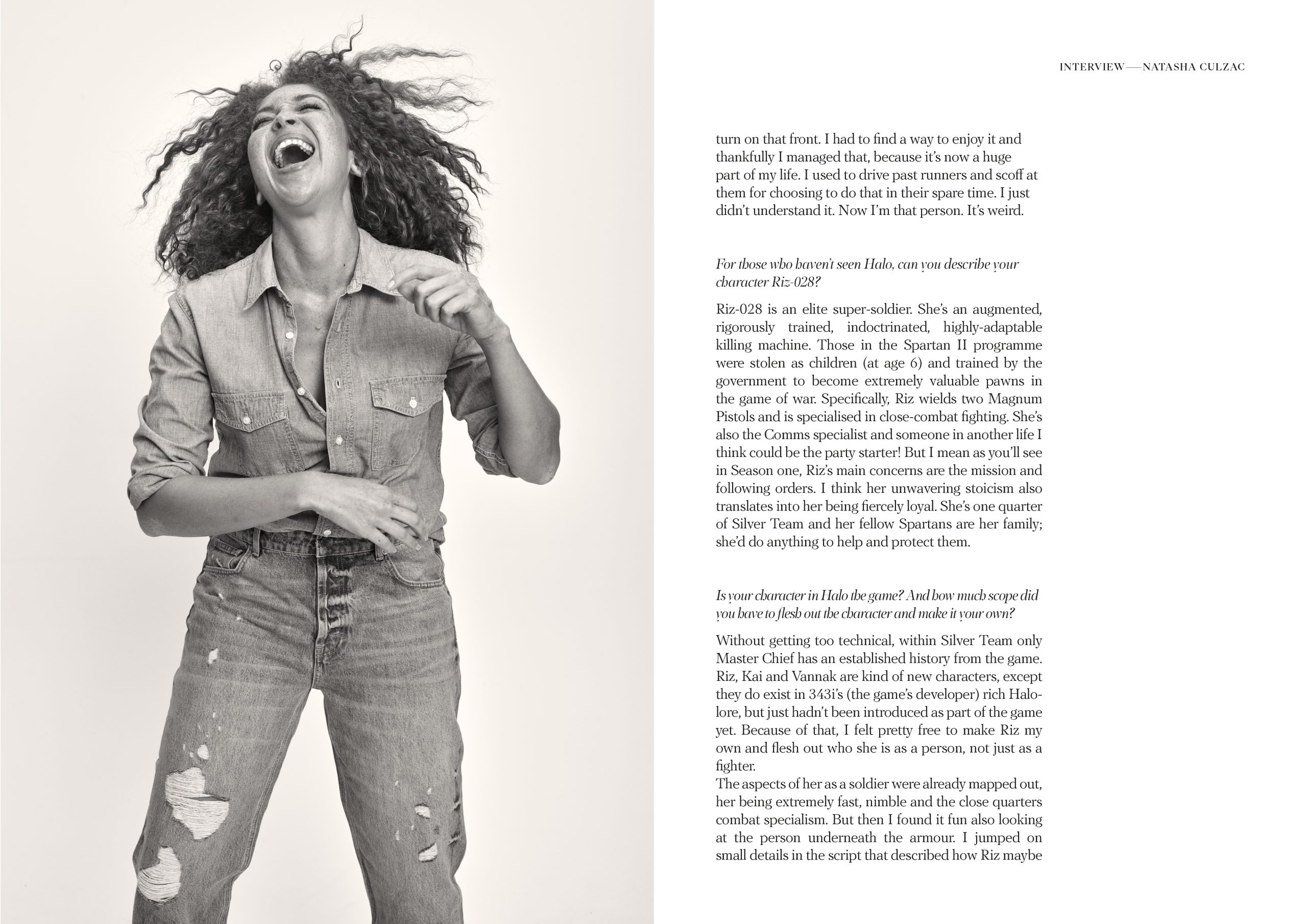 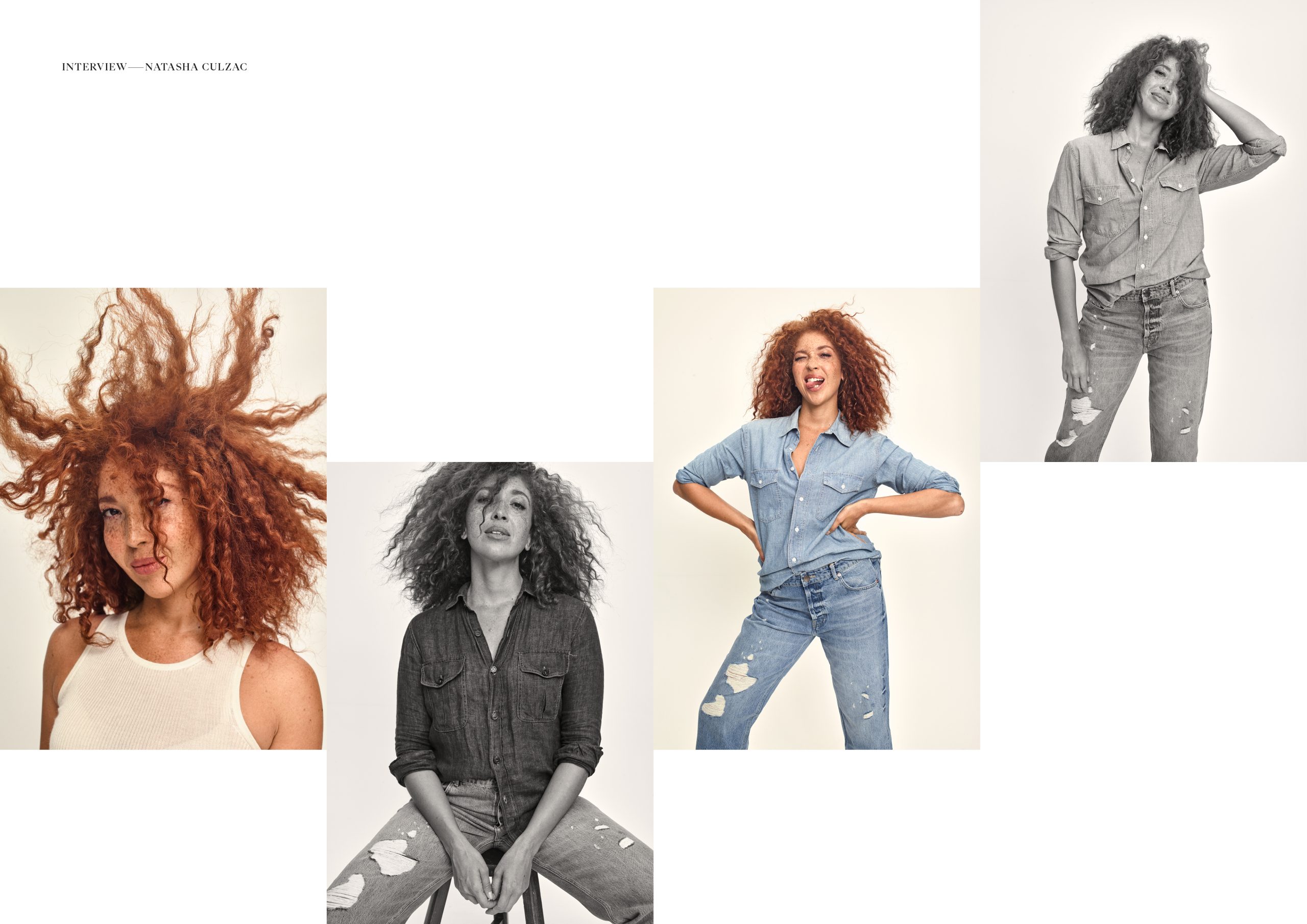 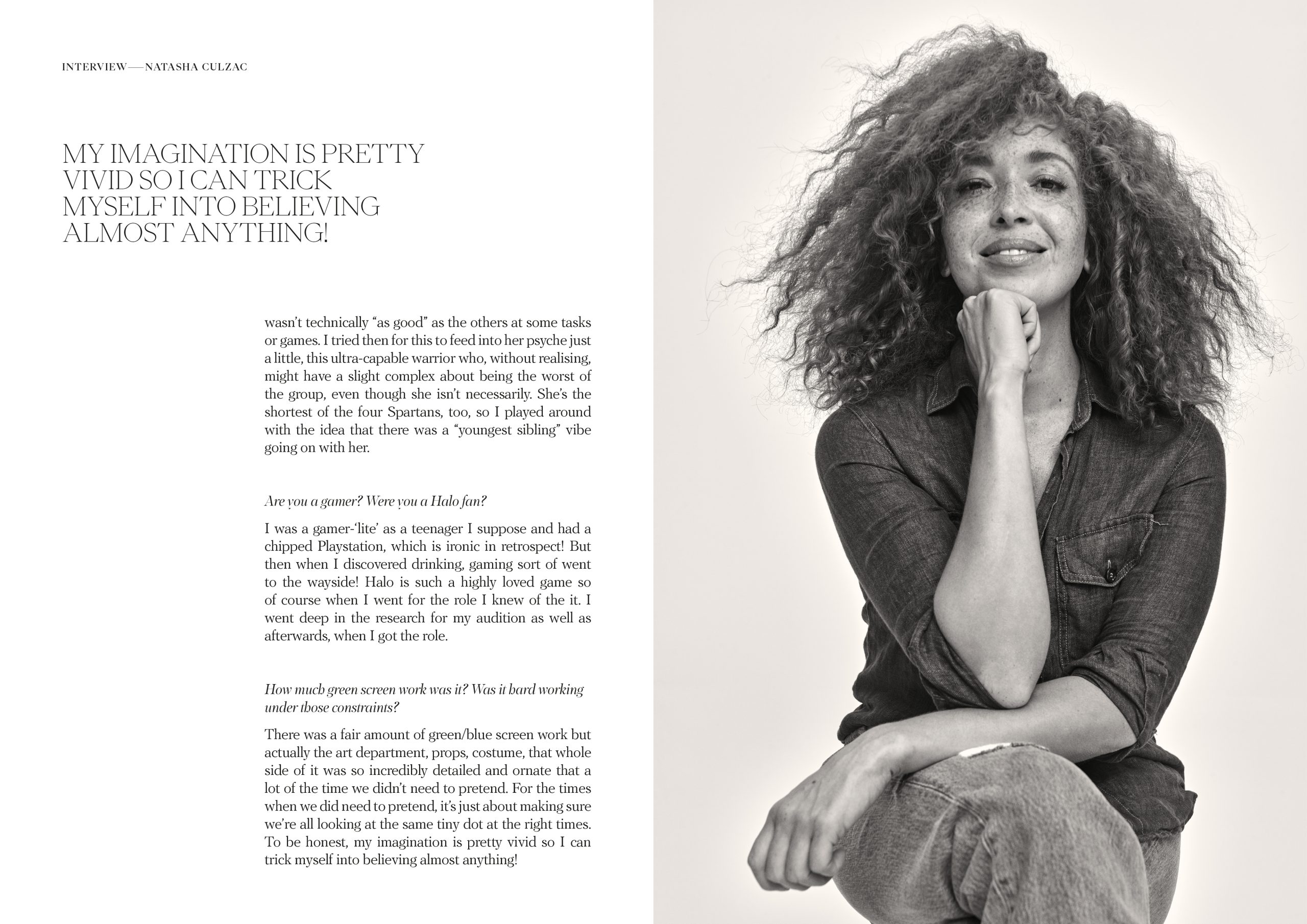 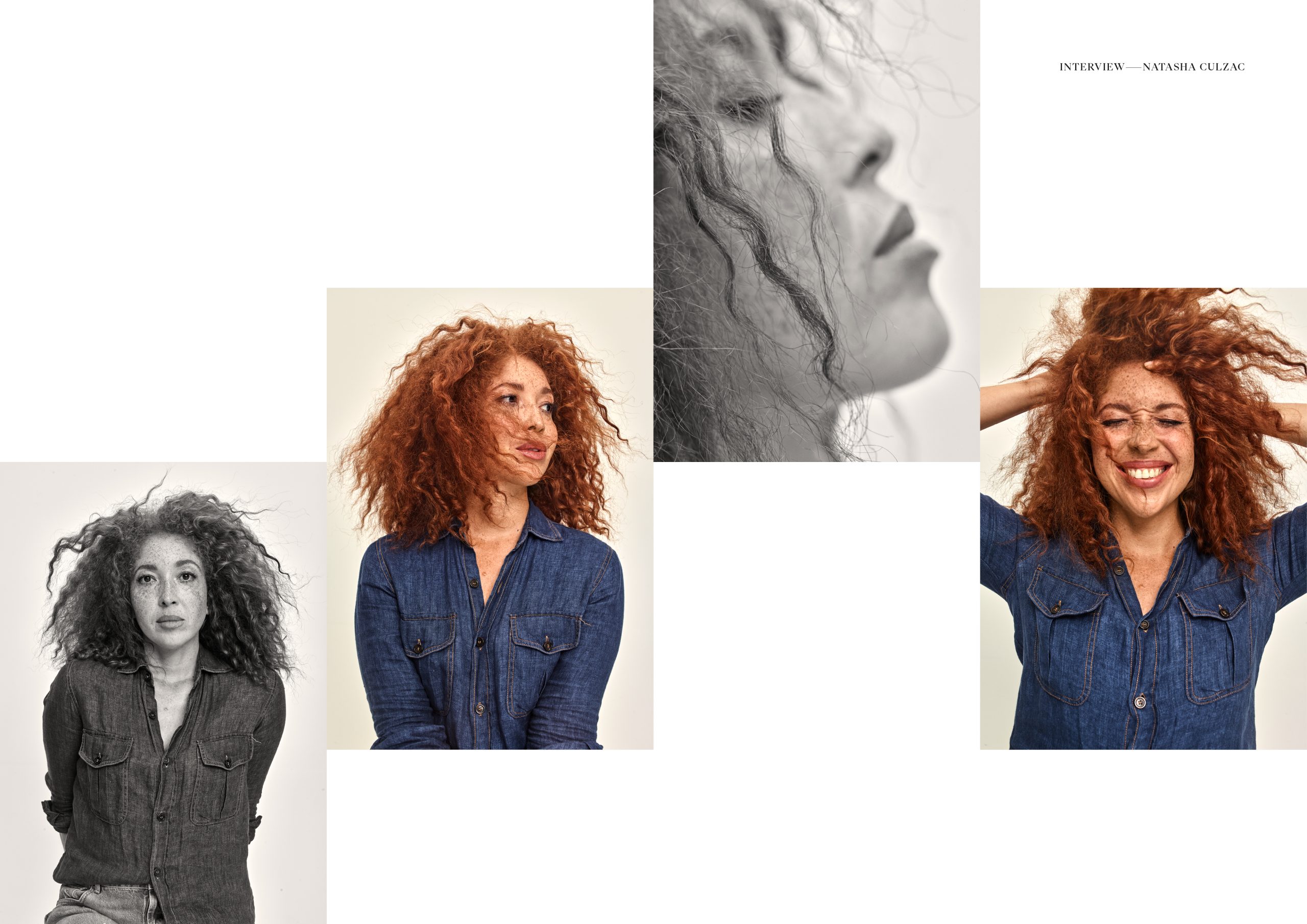 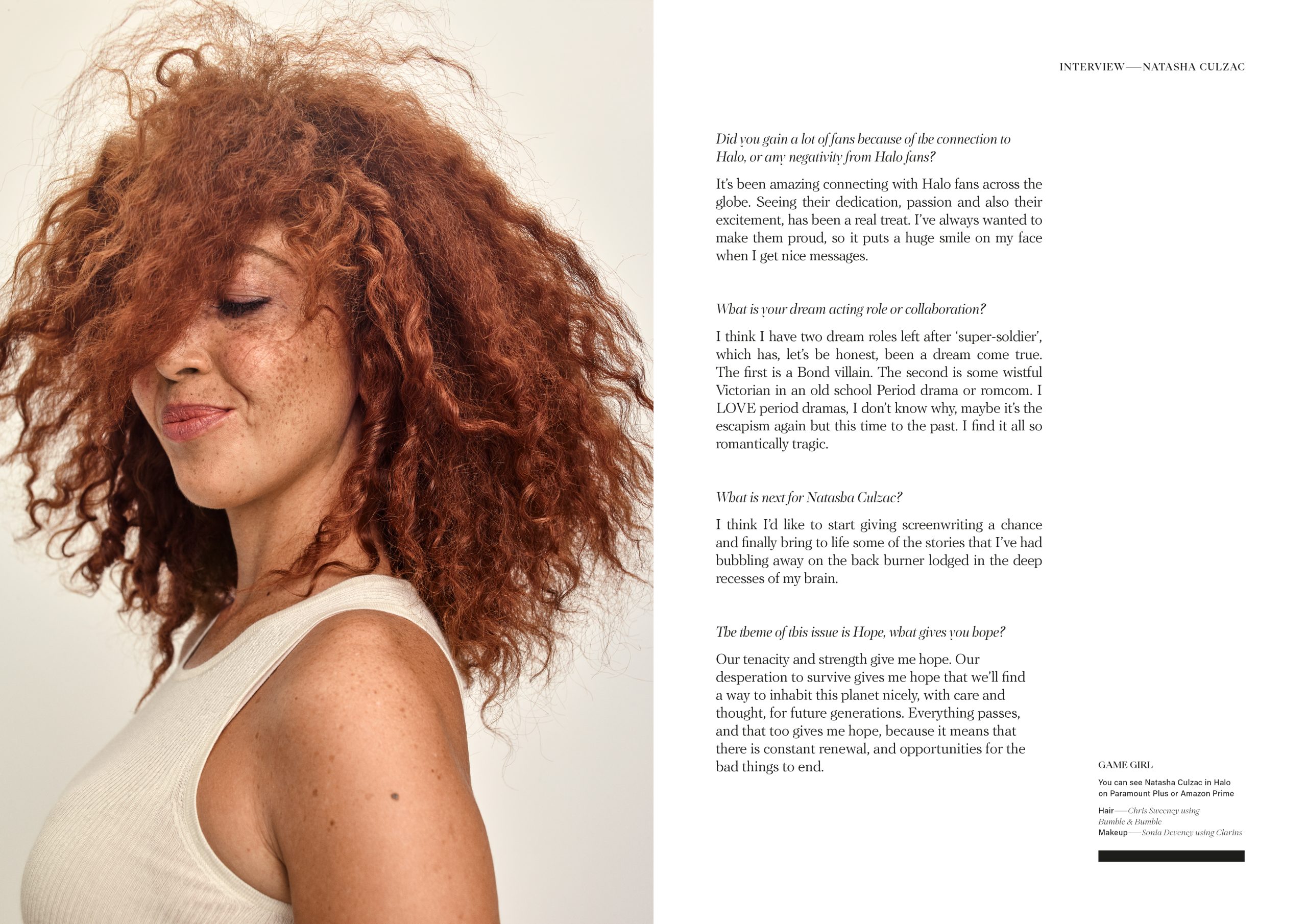