‘It’s nice not to be in a school uniform,’ says Poppy Lee Friar, with a smile. The 26-year-old actor is still at a stage where she can be cast as a teenager as demonstrated by her fresh-faced good looks when we chat on Zoom.

We are talking about the upcoming BBC drama, My Name Is Leon in which Lee Friar plays a mother for the first time in her career, a rites of passage of sorts.  Set in Birmingham against the backdrop of the 1980s race riots, it tells the touching story of Leon (newcomer Cole Martin), a nine–year-old mixed-race boy and his quest to reunite his family after being taken into foster care and separated from his baby brother Jake, who is white.

Based on the bestselling novel by Kit De Waal, the production came about after Lenny Henry voiced the audiobook and was determined to bring it to the screen. The stellar cast also includes Olivia Williams, Christopher Eccleston, Monica Dolan and Malachi Kirby (Small Axe) and is written by Shola Amoo and directed by the Bush Theatre’s Lynette Linton, both making their TV debuts.

Lee Friar said she had to stop herself from gushing when she got the role of Carol, the boys’ birth mother who is struggling to cope as a single parent. ‘It’s so great to not only see diversity on our screens right now but to hear those stories. I feel so honoured to be a part of it. It’s certainly not a story of pity, these people are really trying their best, they’re defiant and hopeful.’

‘It’s really hard for Carol,’ she adds. ‘The 80s was a time when postnatal depression wasn’t as understood as it is now so she was not necessarily getting the right help.’

Lee Friar is no stranger to gritty material, where she excels at bringing out a strong character’s vulnerability beneath her bluster. Back in schoolgirl mode, she can be currently seen in series two of In My Skin, the BAFTA-winning Welsh teen comedy-drama, which recently premiered on iPlayer.

Like My Name Is Leon, it tackles weighty issues with a lightness of touch, in this case the gap between 16-year-old Bethan’s troubled home life with a mum with bipolar disorder and the fantasy life she portrays to her school friends, including Lee Friar’s feisty Lydia. Although aimed at teens, she likens its ground-breaking approach to that of other female-driven dramas such as Fleabag and I May Destroy You. ‘I think Fleabag may have kickstarted something and I love what Michaela Coel’s doing, it’s absolutely sensational.’

She cites the work of her co-stars Gabrielle Creevy and Jo Hartley, who play Bethan and her mother, and the writer Kayleigh Llewellyn. ‘It’s heartbreaking, it’s hilarious, it’s very raw and truthful and I think people really like that. I’ve championed that sort of raw honest acting that you see in In Your Skin as much as I can.’

We talk more about who inspires her and when she picks Tilda Swinton and Isabelle Huppert it’s clear that she means business.

Poppy Lee Friar’s long and varied CV is certainly testament to her commitment to her craft – and her way with regional accents. She grew up in Southwark, south London and attended the Sylvia Young theatre school, before making her mark as the lead in the CBBC series Eve, playing a robot disguised as a teenage girl, the perfect showcase for her mercurial talent.

Since then she has portrayed everyone from a ringletted parson’s daughter, alongside Rachel Weisz, in the costume drama My Cousin Rachel to Olympic ice queen Jayne Torvill in the ITV biopic Torvill and Dean, another deep dive into the 1980s.

But there is one role she can’t shake off: sassy schoolgirl Missy Booth, from the Channel 4 drama Ackley Bridge, set in a secondary school in a racially diverse, and at times divided, Yorkshire mill-town.

Missy’s death scene, following a hit-and-run accident, had social media burning up. ‘People felt like they were mourning a real person,’ she recalls. It was like that for me too.’ Two years on, she hasn’t really let Missy go: ‘When you’re playing a character, they’re always with you,’ she says. ‘Sometimes I’m in a shop and I’ll see something like a pink top and think, “Missy would wear that.”’

What about Lee Friar’s own style? Growing up in central London (‘my poor lungs!’) she has fond memories of trawling Rokit in Covent Garden and Beyond Retro for vintage finds. On the Make cover shoot, she loved the 80s luxe vibe so much that she bought one of the dresses: ‘Eighties music is my kind of go-to anyway, like Blondie, Kate Bush and Bronski Beat,’ she says.

I wonder how she coped with the stillness of the pandemic. She says it was tricky because she was living in LA when it struck, then went abroad to film and wasn’t allowed back into America. A spot of sofa surfing tided her over until she was off on the filming merry go round again, in Birmingham and Cardiff.  ‘It was a crazy time. But I’m practising being zen – with your career so much is out of your control and all you can be is in the present.’

One thing she realised about herself was that she needs to create, whether it’s writing and directing a short film or making a music video. ‘I am an actor in real life,’ she explains. ‘There are so many different people that you can be at any one time. At one point, I was putting my director’s hat on, next I was putting my artist’s hat on, next, making some music.’

If all this multi-disciplinary creativity sounds a tad superhuman, I should mention that Lee Friar has a more sardonic side. For one thing, she adores the dark comedy of Julia Davis – we go off on a fangirl tangent in which she admits to owning a Nighty Night T-shirt emblazoned with Davis’ face.

Current hobbies include brushing up her French (read Vogue France and watch subtitled movies to help with your vocab, she advises) life drawing and zen literature. (She recommends Stephen Mitchell’s 1976 book Dropping Ashes on the Buddha, as tipped by The Dresden Doll’s Amanda Palmer, another favourite artist.)

Not that she’ll be free to indulge them for long. Next year London’s theatregoers will be able to see her in action in a prestigious production, which can’t be revealed just yet. She hasn’t appeared on stage since she was 13, in Macbeth, with Patrick Stewart, so it’s a big deal. ‘I don’t know if it’s a manifestation but I really wanted to do some theatre again,’ she says, brightly.

Final question. This is Make’s optimism issue, so is she a sunny person or more of a grey skies thinker? ‘You can’t not be optimistic when you’ve been so fortunate in life,’ she says, before settling on a more balanced answer, evidence of her continuing quest for enlightenment. ‘It’s yin and yang, it’s OK to be both.’ 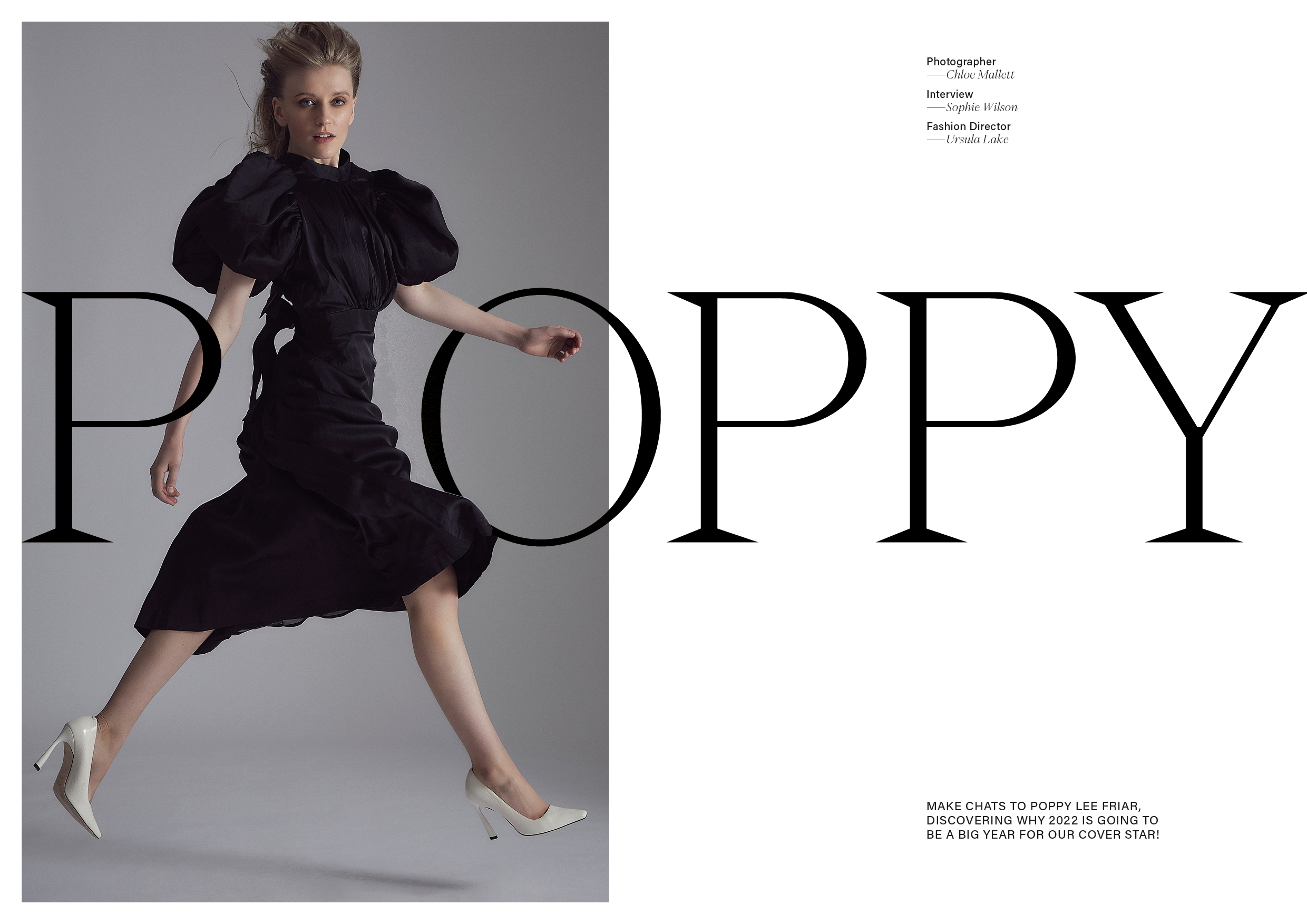 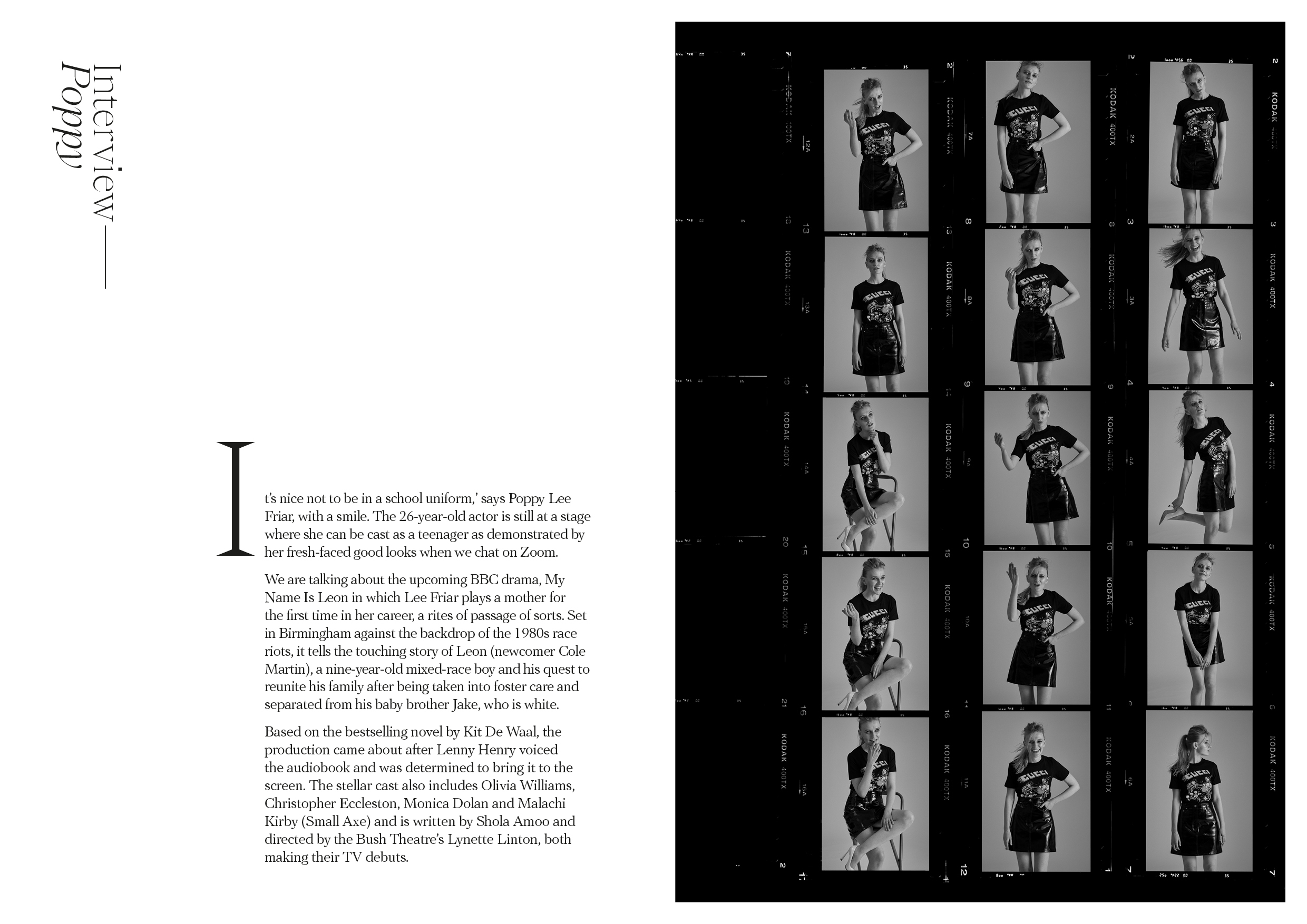 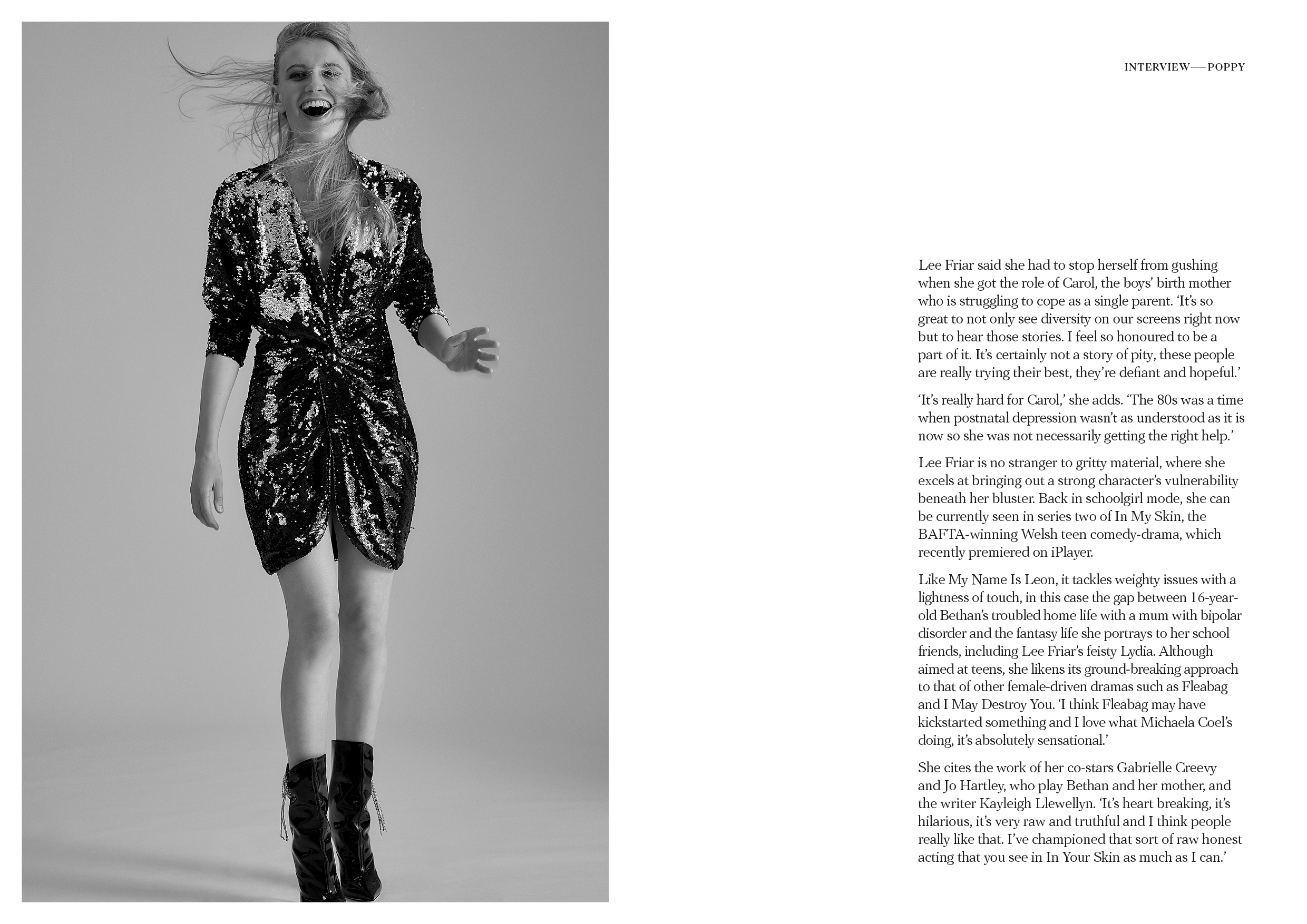 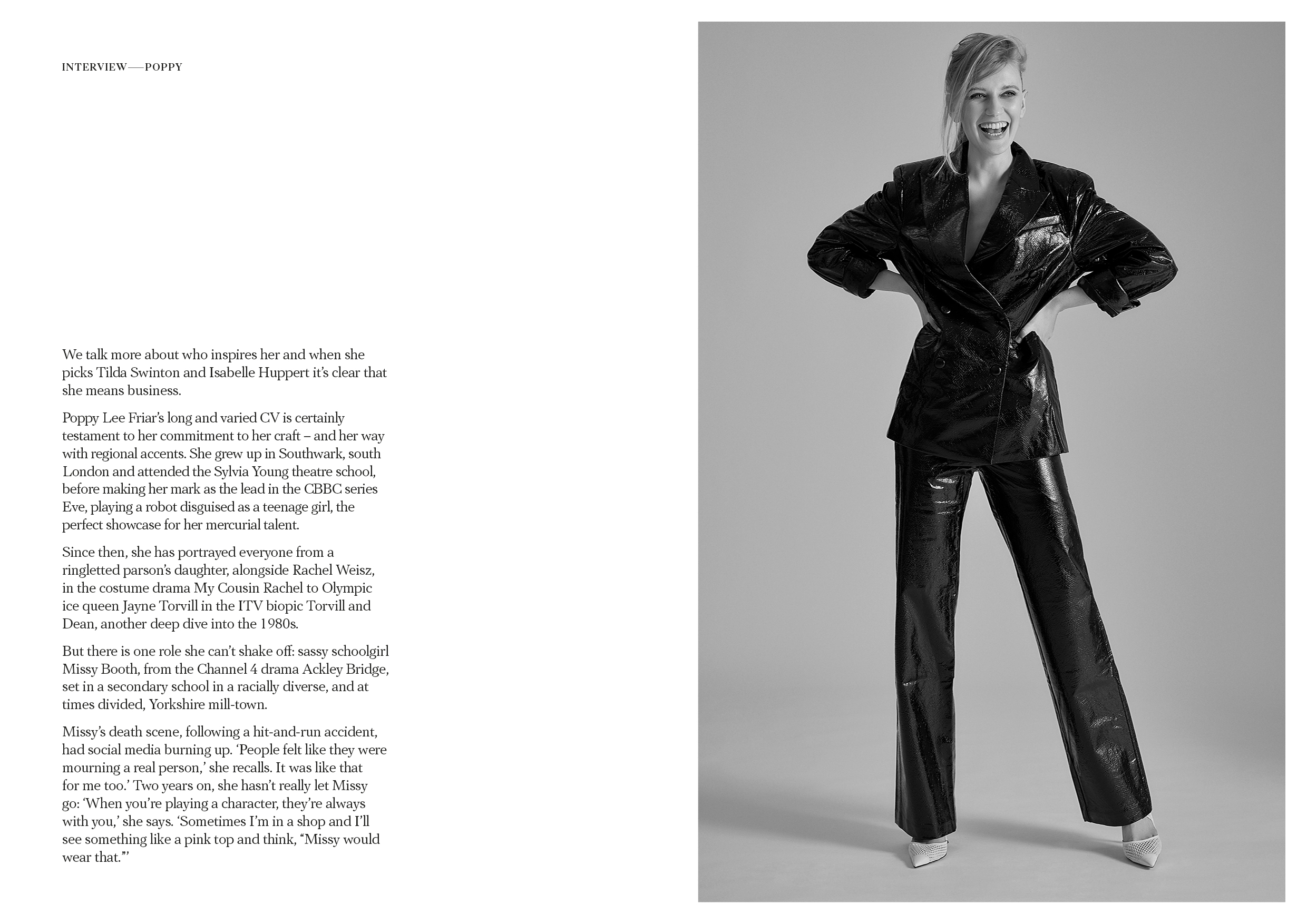 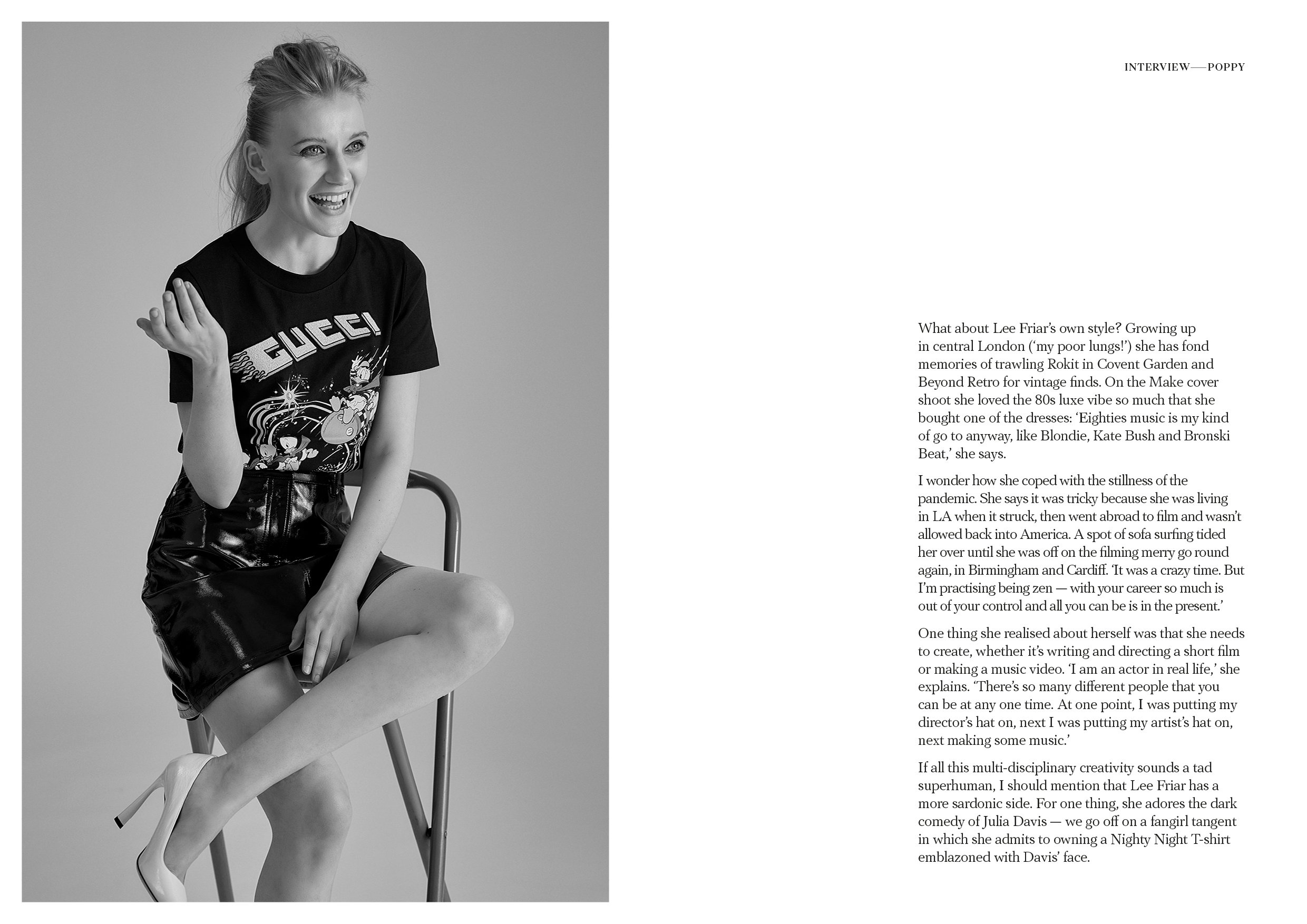 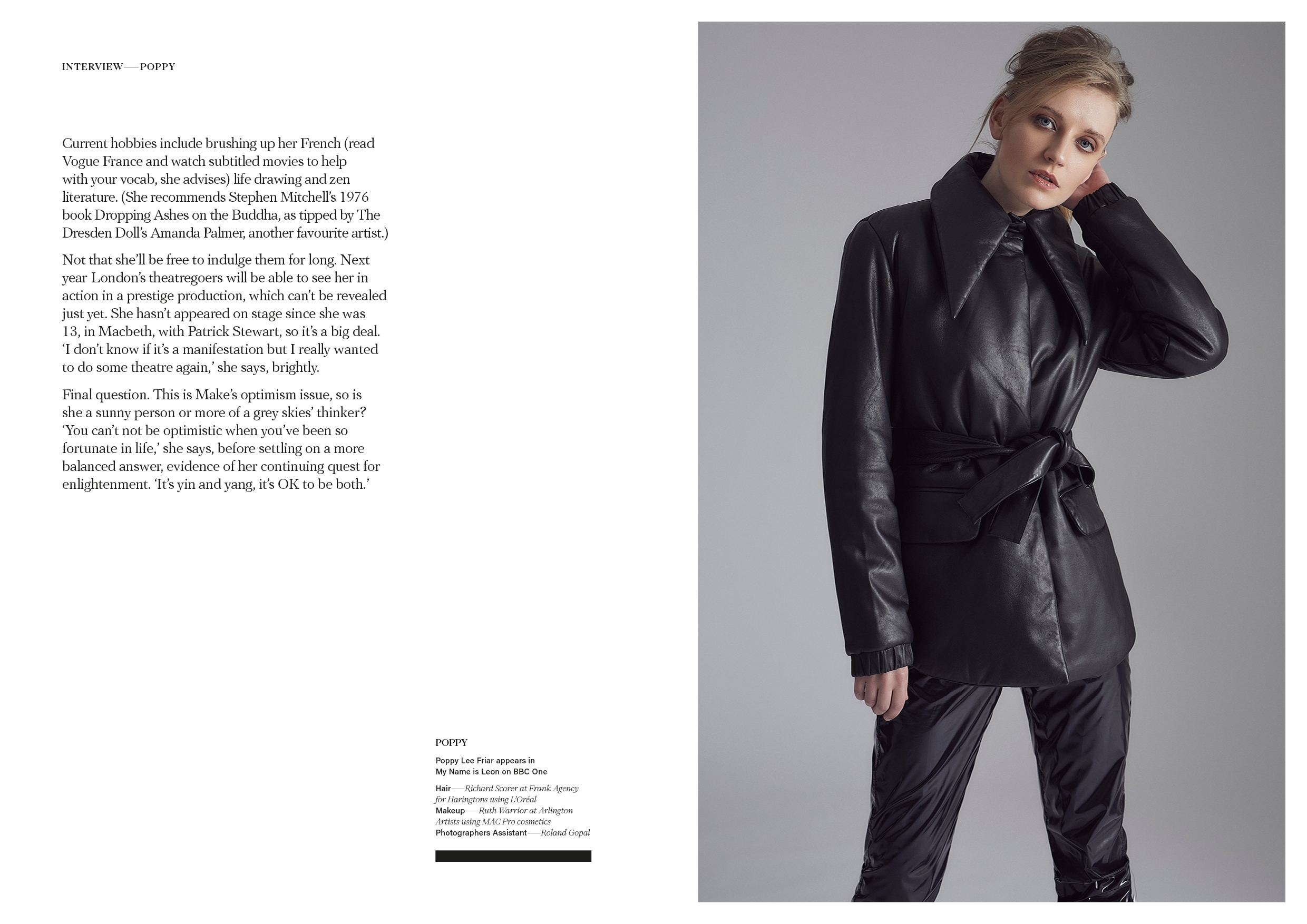