In our latest dive into 21st Century icons, we land upon the seemingly humble Kit Kat. So have a break, have a…

On August 1st 1935 Rowntree’s of York took a punt and introduced four foil and paper-wrapped fingers of wafer biscuit coated in milk chocolate bearing the descriptive but uninspiring name, ‘Rowntree’s Chocolate Crisp’, – and in smaller type promised ‘4 big chocolate wafers’, it was yours for tuppence.

The idea originated from a worker who had popped a note into the company suggestion box for a ‘snack that a man could take to work in his pack up’. Two year’s later, after a rethink, the bar was renamed Kit Kat and it was on its way to exceeding all expectations, becoming Britain’s favourite snack and a global brand, currently producing over 17 billion crispy fingers a year

Rowntree’s had trademarked the names Kit Kat and Kit Cat in 1911 but did not immediately use either on a product.

The origin of the name derives from the Kit-Cat Club, an early 18th-century association of notable Whig politicians and followers who met to discuss politics in a tavern-cum-pie-shop run by Christopher (Kit) Cattling. (Spelling of names in those days was a fairly arbitrary affair and contemporary sources give his surname as Cat, Catt or even Kat.) Legend has it that the club’s name derived from the proprietor’s mutton pies known as Kit-cats, which, in addition to alcohol, fueled the evening’s debate. As a name for a pie it does, unfortunately, tend to conjure up images of a feline-dispatching landlord in the mould of infamous throat-cutting barber Sweeny Todd, substituting stray moggies for mutton.

Be that as it may, Kit-Cat finally found its way onto a chocolate box in the 1920s, then still an expensive luxury item.  Somewhat incongruously the illustration on the box lid depicted a finely attired gentleman posing outside a pie shop on which the signage reads, ‘Pastry Cook. Chris Cat. His Shoppe.’ Accompanied, hey diddle-diddle, by an inn sign of a fiddle-playing cat! Not the most appetizing image for a box of chocolates. Perhaps the Whigs were as keen on chocolates as they were on mutton ‘pyes’. Then, in 1933 and on the brink of bankruptcy, Rowntree’s focused their efforts on Black Magic chocolates and Kit-Cat was parked, only to reemerge with its catchier double K in 1937.

During WW11 Churchill’s government endorsed Kit Kat as a cheap and healthy source of nourishment but a milk shortage resulted in the milk chocolate coating being replaced with dark chocolate. The packaging changed to blue and the ‘Chocolate Crisp’ description dropped off the pack, replaced with the promise that ‘Our standard Chocolate Crisp will be re-introduced as soon as milk is available.’ The price, incidentally, had by then risen to three-pence.

Our much-loved milk chocolate snack did not return until 1949, once again resplendent in its unmistakable bright red wrapper and sporting the now familiar large oval Kit Kat logo centre face.

The long-running slogan, ‘Have a Break, Have a Kit Kat’, emerged from the J Walter Thompson advertising agency in 1958.

The two-finger bar, sold in multi-packs, arrived in 1960 and the heavy-duty ‘Chunky’, for serious chocoholics, in 1999. Kit Kat has been a Nestlé brand since 1988 when they bought what was by then Rowntree Mackintosh.

For half-a-century part of the ritual of Kit Kat feasting was running a thumbnail down the silver foil as a prelude to snapping off a finger but in 2001 this simple pleasure was denied us when the paper and foil packaging was replaced by a tear-open plastic job. I almost wrote to the Times to complain. Fortunately, the paper-wrapped two-finger bar in the multi-pack still allows one to experience that little frisson of anticipation as you incise the silver foil before you snap.

As someone who has never ventured beyond the dark chocolate alternative to the milk chocolate Kit Kat some of the flavours available across the world make the taste buds shrivel at the thought. Japan is flavour cazy and has had over 200 variations since 2000. How about baked potato, soy sauce, saki, cherry blossom or green tea to name but a few? I must say that I’m perfectly happy with the old-fashioned Kit Kat, thank you. 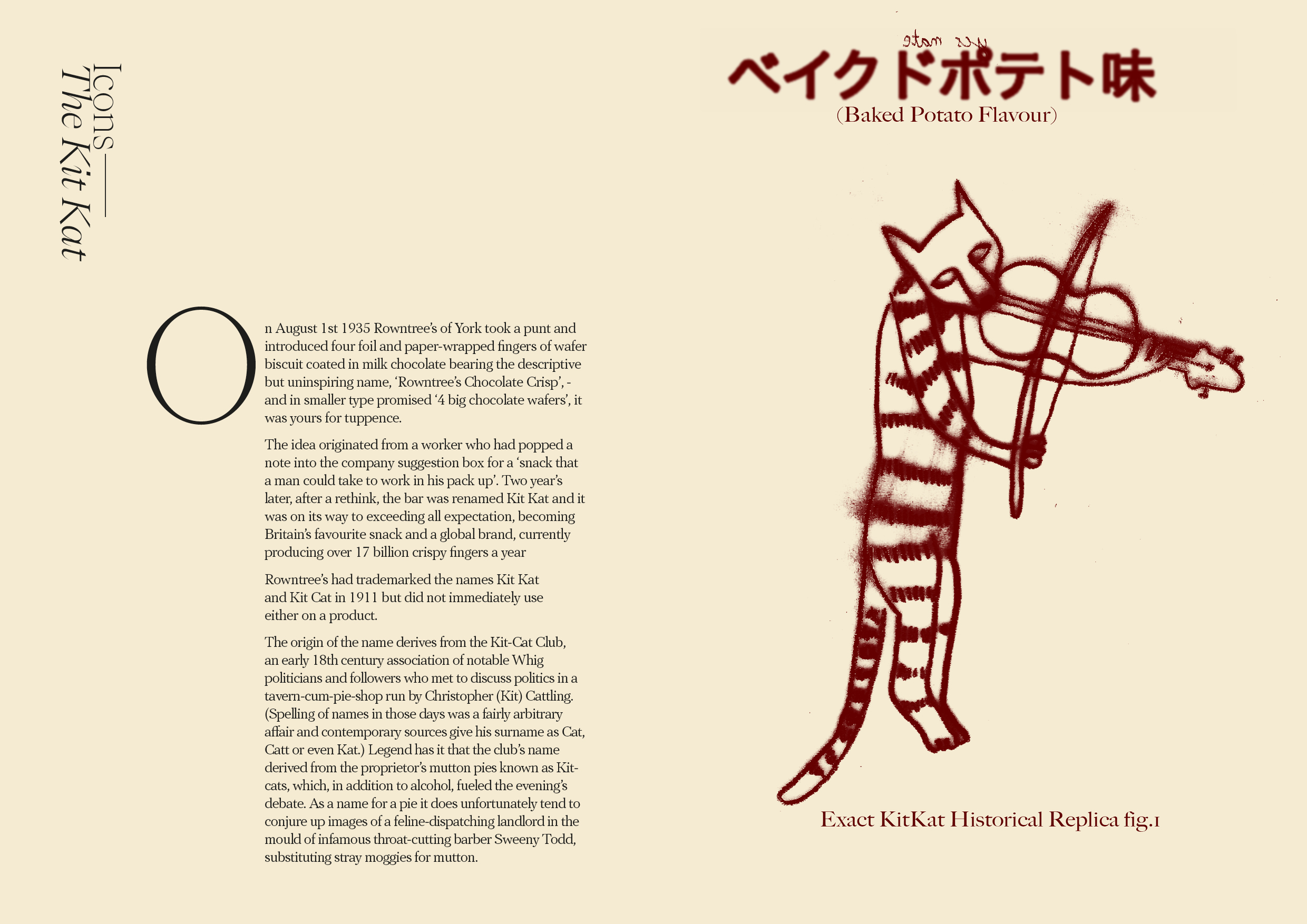 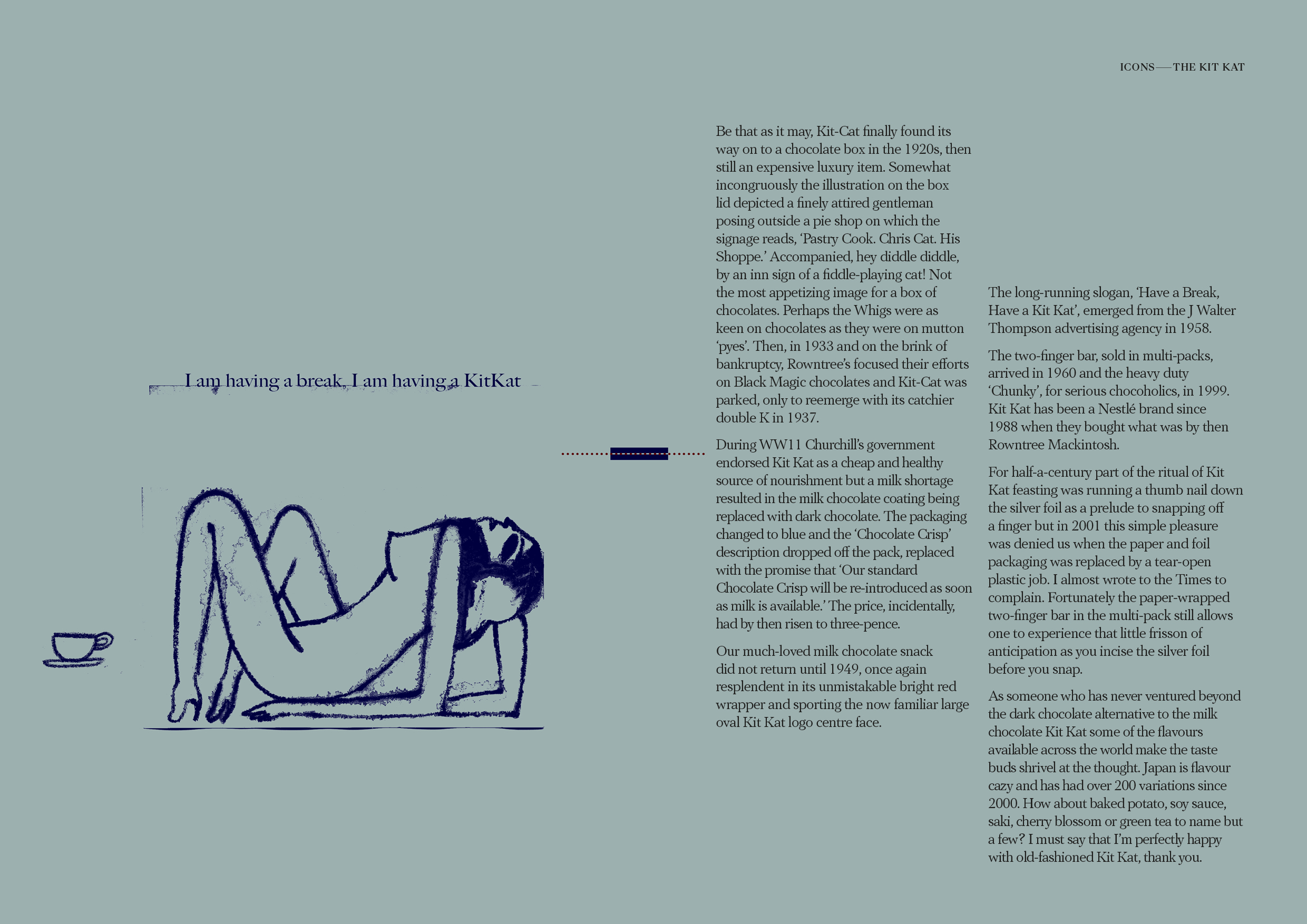