Make enjoys a chat with the wonderful and charming Omari Douglas.

The last year has been a waiting game for most of us but Omari Douglas has had an extra layer of nail-biting trepidation. Along with the rest of the cast, the breakout star of the hit Channel 4 TV drama It’s a Sin wrapped up filming in January 2020, so Douglas had the double whammy of lockdown restrictions and waiting an entire year for the now seminal show to air.

“We knew it would be good – you just had to read the script to know that,” says Douglas, talking on Zoom with an enviable background of rich oxblood-coloured walls. “It was a huge relief when we received so much praise, as it was so important to everyone involved that we honoured the people for whom the story is their own history. The response has also been very emotional and overwhelming.”

Written by Russell T Davies, It’s A Sin charts the AIDS pandemic and the government reaction (or lack of) and social response. It has been Channel 4’s most successful drama launches ever, with more than 6.5 million people watching the show in Britain. The normally snippy film review site, Rotten Tomatoes, gave it a rating of 98%.

More poignantly, the drama series saw a surge in awareness of HIV not seen since those clunky ‘Don’t Die of Ignorance’ public health announcements of 1986. On the day of the series debut, the Terrence Higgins Trust charity reported that 8200 HIV testing kits were ordered in a single day, compared to the previous high of 2800.

Given that 100,777 British people – mostly young men, mostly gay, mostly black – contracted HIV between 1981 and 1990, and a third of them died (around 28,000), it’s astonishing to realise that It’s A Sin is the first time the topic has been tackled on British TV. It follows the lives of five young friends, new wide-eyed members of the rainbow-coloured, strobe-lit, gay nightclub scene in London in the early 80s. It’s also a punchy reminder of the heart-wrenching prejudice of mainstream society and government policy at that time.

The eloquent screenplay allows each character, to have a multi-faceted personal story. Douglas’ character Roscoe, is on one hand an unforgettable embodiment of the peacocking glam and defiant joy of the disco-loving, pre-AIDS era gay community but he is also deeply hurt by his self-imposed exile from a strict, religious Nigerian family who believe in gay conversion therapy.

“He’s audacious, unapologetic and a force but that expression also hides a vulnerability – as though the outrageous energy was a way of wrapping a cloak of protection around himself,” says Douglas. Gay hate crimes were common in Britain in the 1980s and 1990s. It took the Admiral Duncan pub bomb in 1999 for the Crime Prosecution Service to announce a ‘zero-tolerance approach to anti-gay offences, which took until 2002 to come into effect.

However, Davies’ script doesn’t focus on many extreme events. Instead, it gently lays out the insidious everyday prejudices facing gay men, such as quietly losing jobs or not being able freely to celebrate long-term relationships (same-sex marriage has only been legal in the UK since 2013). ‘Outed’ gay people were frequently ostracised by their family. Grieving life partners were refused entry to funerals of AIDS victims.

Douglas would like to see subjects like the AIDS pandemic studied in schools. He cites the protests against ‘queer-related teaching’ in Birmingham in 2019 as an example of how attitudes have not shifted nearly enough. “We live in a multicultural society and with that, you have very different approaches to life and humanity. That causes clashes. The way forward is to educate about vilified and marginalised groups. We need an open conversation that starts in the classroom because if you can’t do it then, when can you?”

Born in 1994, Douglas grew up in Wolverhampton, living with ‘just his mum’, who works for the NHS. “I come from a large extended family and have loads of cousins, all who were older than me. I loved making them all laugh. I was a bit of a show-off really. Wolverhampton was a quiet city and drama was definitely an outlet for expressing myself.”

Douglas was an academically gifted child and was set to enter one of the elite universities but his passion for performing arts pulled him back to drama school. “I thought, why study German or music when at the end of it all, I’d still just want to be an actor.” Douglas went to the Arts Educational School in London and built up a respected reputation as a theatre actor before Davies’ script arrived at his door.

His West Indian/London upbringing remains a huge influence. He’s greatly inspired by the photographs of Malick Sidibé’s portraits of young people in newly independent Mali in the 1960s. “I love the flares, the massive collars, the music”, he says. On the Make shoot, he loved dancing around in 70s-inspired suits. “It was so much fun and I felt like being on a dance floor again!” he says, showing a rare moment of Roscoe-mimicking drama.

He mentions wearing a pair of trainers from Grace Wales Bonner’s West Indian-inspired Adidas collaboration in one of the shots, saying, “There’s something innately creative about opening your wardrobe and putting something together. Clothes are not just functional; they are an outlet for so many people. It elevates me, it’s evocative – you can literally time travel in clothes. Fashion keeps my imagination alive.”

Omari will be appearing in Constellations by Nick Payne at the Vaudeville Theatre, London, from  (30 July – 11 September 2021).
Please visit: www.donmarwarehouse.com 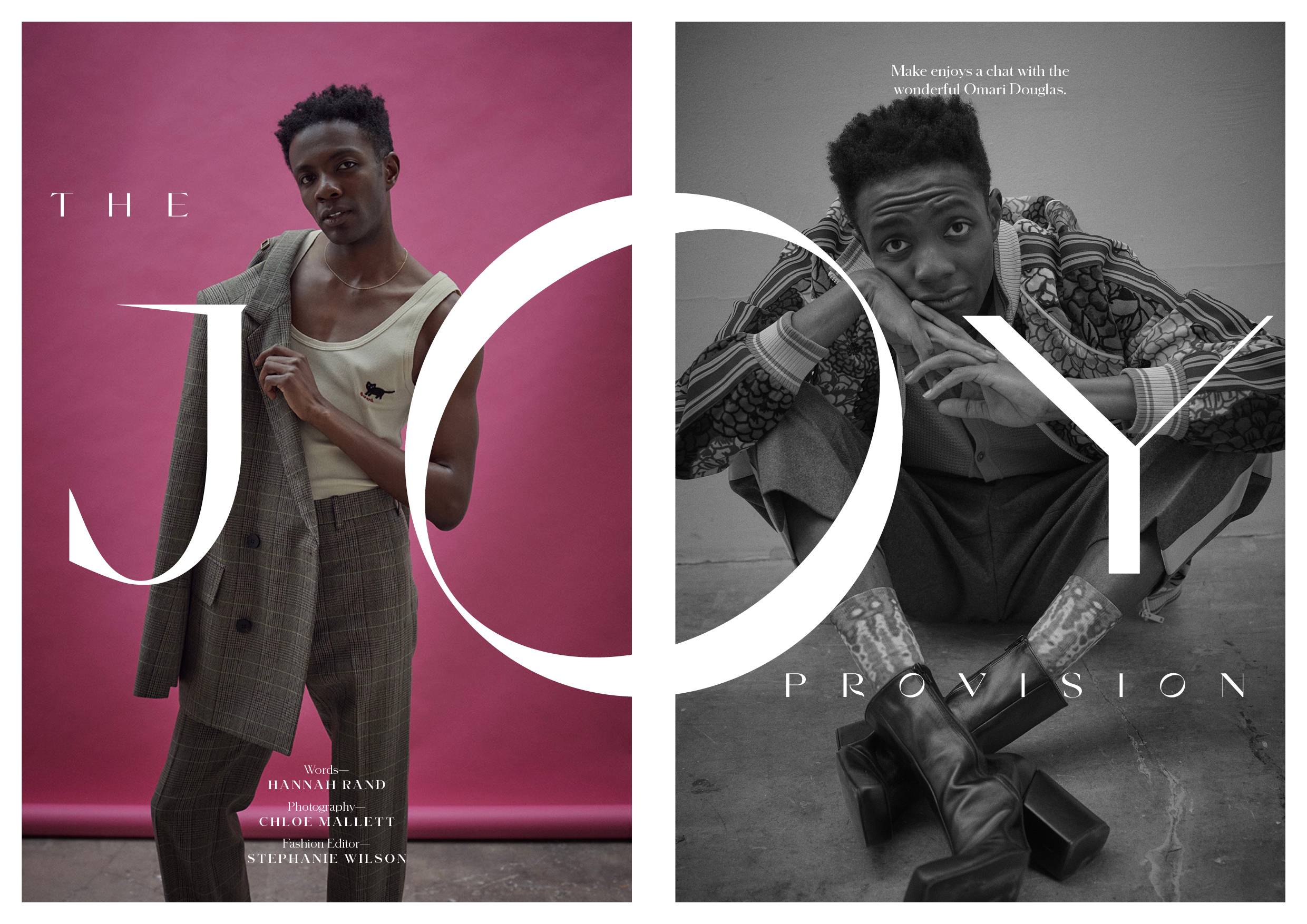 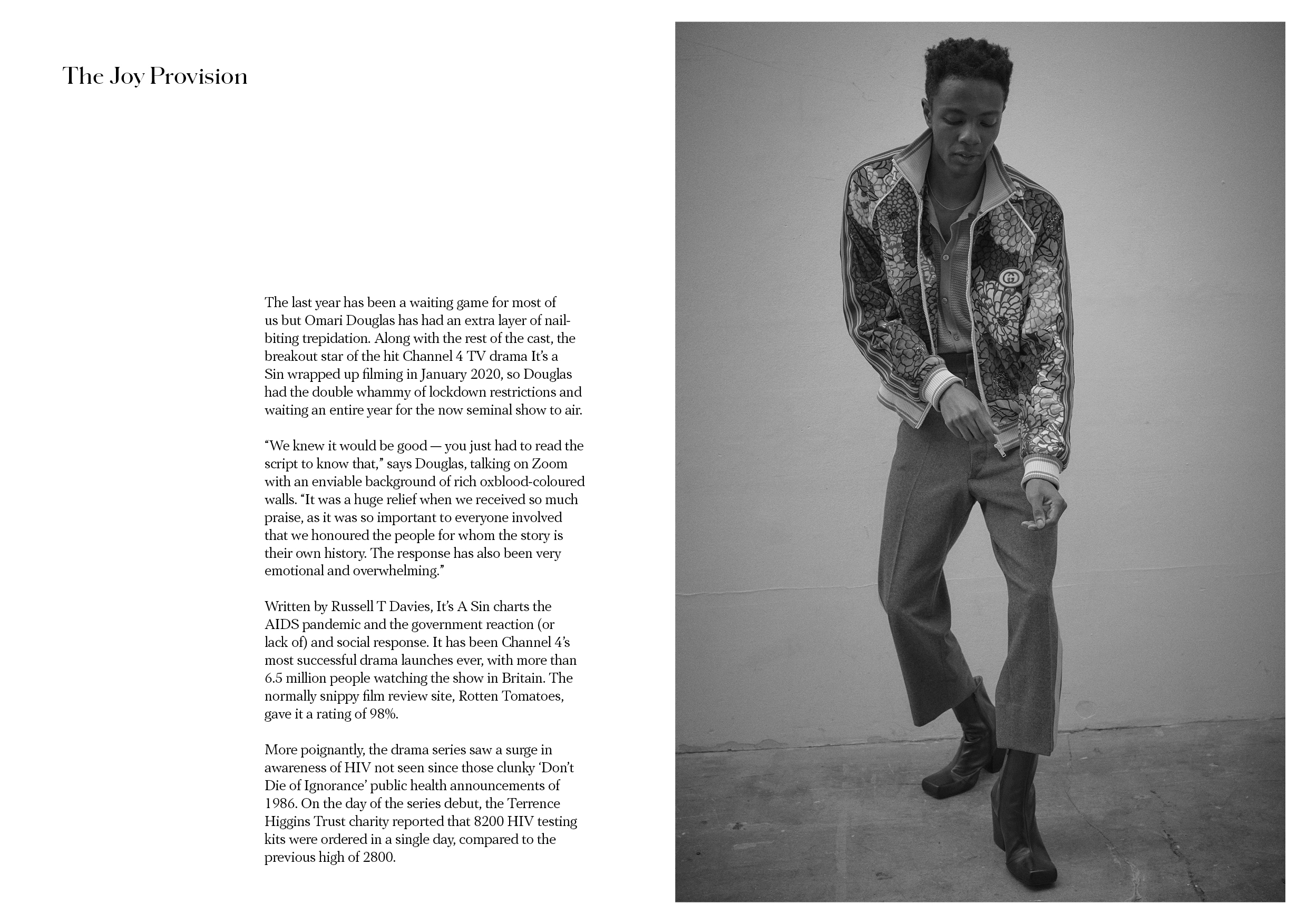 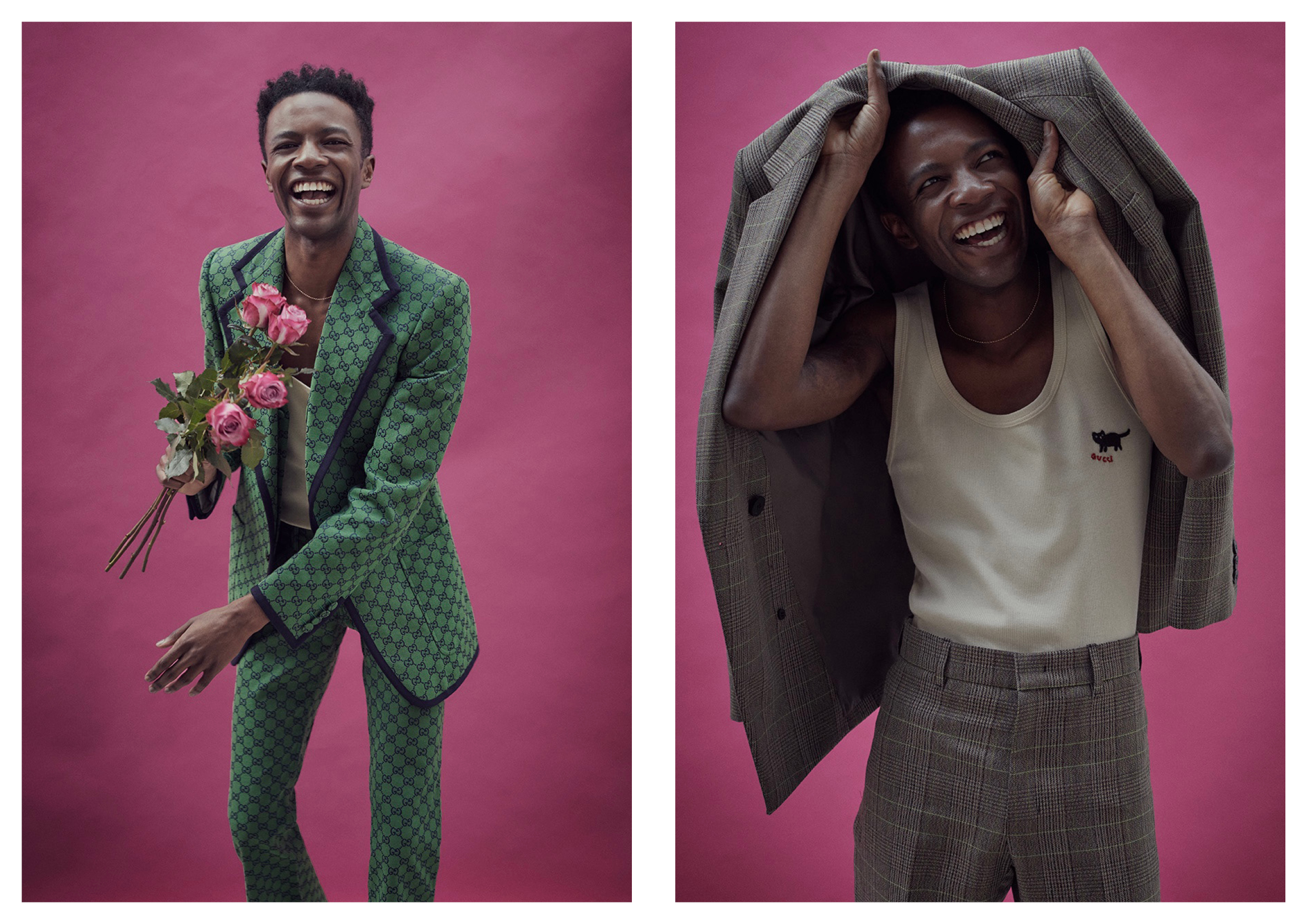 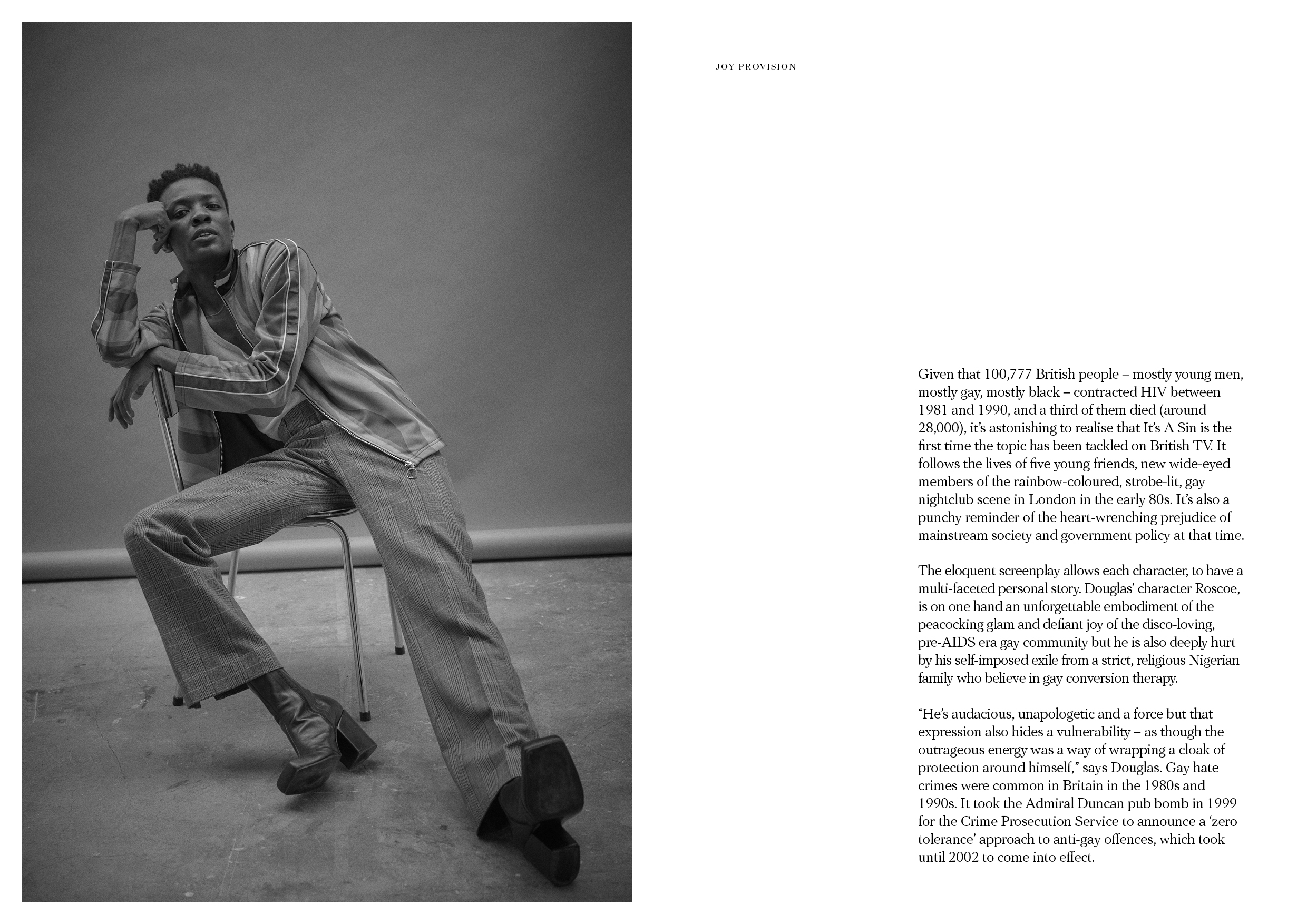 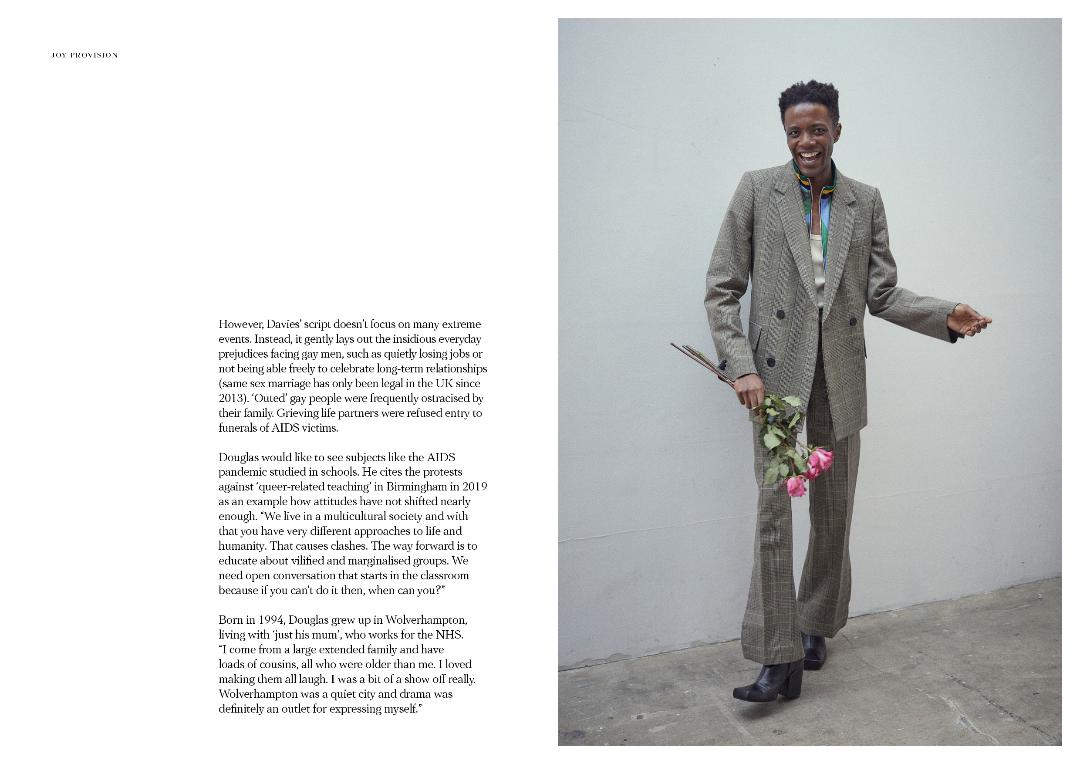 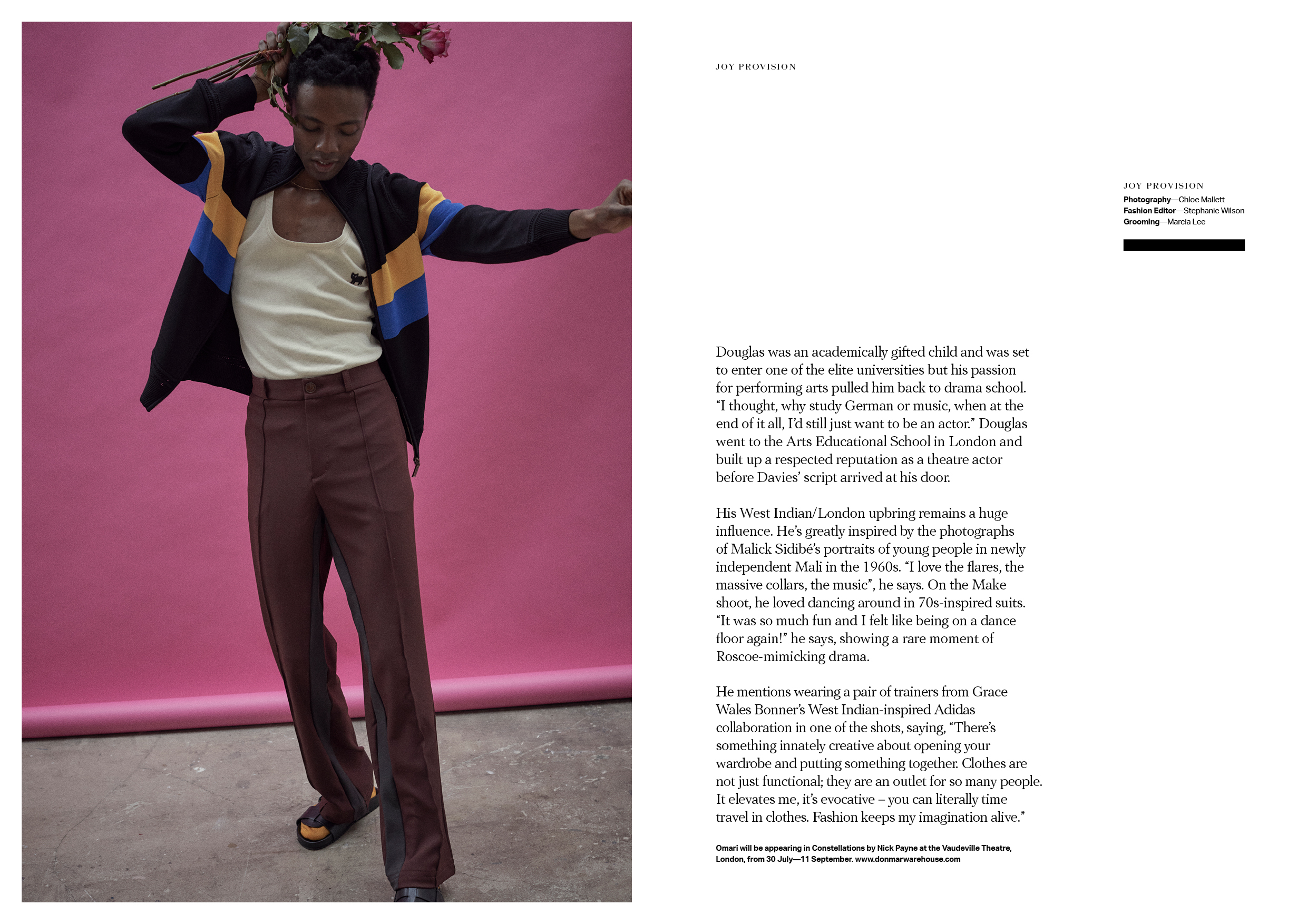