If your bag (please forgive the pun) is vintage luggage then nothing could be cooler than a well-travelled Halliburton, sticker festooned, slightly scuffed with perhaps a dent or two.

Halliburton aluminium luggage remained essentially unchanged for more than 80-years but with the recent introduction of a completely revamped range, the ‘old’ double ribbed version has now assumed ‘classic’ status.

Erle Palmer Halliburton was a tough dude. A self-made millionaire from the pioneering days of oil exploration who actually got where he was by getting his hands dirty – sometimes very dirty. Erle left school when he was 14 after his father died and started work to help support his mother and 5 siblings and after a spell in the Navy he headed to the booming California oil fields, landing a job with the Perkins Oil Well Cementing Company. The job didn’t last as his constant suggestions for improving the cementing process riled his boss who fired him. Erle later observed that ‘the two best things that ever happened to me were being hired, and fired, by Perkins’.

Out of work, Erle decamped to Texas, another oil-rich state, in the hope of selling his ‘new and improved’ oil well-cementing technique to the drillers there. The breakthrough came when he was called on to use his cementing method to fix an out of control well in Oklahoma. He succeeded and with his services now in demand he formed the Halliburton Oil Well Cementing Company in 1920 and he was well on the way to making his fortune as head of one of the world’s largest oil services companies.

So where do aluminium suitcases fit into this story? Drilling for oil is a messy business and on his many field trips to dusty or damp locations Erle’s luggage and documents often got dusty and damp too. Erle had for a brief time been a partner in an airline company flying the famous Ford Tri-Motor, one of America’s earliest all-metal airliners and distinctively clad in corrugated aluminium sheet.

Towards the end of the 1930s, Erle decided to build a better suitcase, one that was light, strong, dust- and damp-proof and with his aircraft connections he had a set knocked up in aluminium. The unique feature and engineer’s touch lay in the lip around the shell: a groove in the base contained a rubber gasket which, when it is clamped tight by the twin latches, forms a dust and humidity-proof seal.

Erle’s simple, functional, industrial-look luggage gained attention and reckoning that there was a market to be found amongst the business fraternity and wealthy travellers, he formed in 1938 the Halliburton Case Company in Burbank, Los Angeles, a stone’s throw from Hollywood. Tinsel town’s glitterati were early converts, including superstar Marlene Dietrich who posed in 1940 with a set of four assorted cases.  In 1946, however, the MkII version with distinctive double ribbing for added strength was introduced and the definitive Halliburton had arrived. The ribs were a touch of inspiration and shifted the case from being merely an expensive but bland box into a sleek modernist design that both epitomises its period and transcends it.

Each Halliburton case was crafted from aircraft-grade aluminium, cold-drawn to create two beautifully formed, wrinkle-free shells and then heat-treated, buffed and anodised to improve the strength and durability of the metal before the ‘furniture’ was added: a full-length piano hinge, four alloy feet, two chrome over-centre catches, a three-digit combination lock and a warm-to-the-touch, silver plastic handle.

Erle died in 1957 by which time he had sold the case company, which continued to be made in Burbank by the intriguingly named Zero Corporation. Despite its beauty and practicality, the Halliburton would probably have remained an esoteric accessory whose appeal was largely restricted to the wealthy, adventurous safari-ists, explorers or professional photographers. But all that changed when Halliburton became a film star. Today no self-respecting on-screen spy, Colombian drug baron or professional assassin is properly kitted out unless the tools of his trade are secreted in a Halliburton attaché case. A ‘click, click’ of the locks, followed by a practiced spin of the case while simultaneously raising the polished lid invariably reveals a few kilos of heroin, bundles of greenbacks or a silenced Heckler & Koch – but absolutely never a packed lunch. Halliburton cases have to date made over 300 movie and TV appearances – and counting.

Of course success led over time to a little product diversification. The original range of a half dozen cases at one point had expanded to around 160 variations, bashing and banging their way around the world carrying everything from makeup to guitars. Special custom-made Halliburtons carried moon rocks back from the Apollo 11 space mission and that Marine who follows the US President everywhere with the so-called ‘football’ containing the nuclear codes is actually carrying a Halliburton, although in this case covered in leather to make it more discreet.

Conceived when aeroplanes were still hauled through the skies by propellers and used pistons in their engines, the Halliburton suitcase soared into the age of the jet setters and has remained totally ‘modern’, even outlasting Concorde. There are still plenty of miles left in a vintage Halliburton. 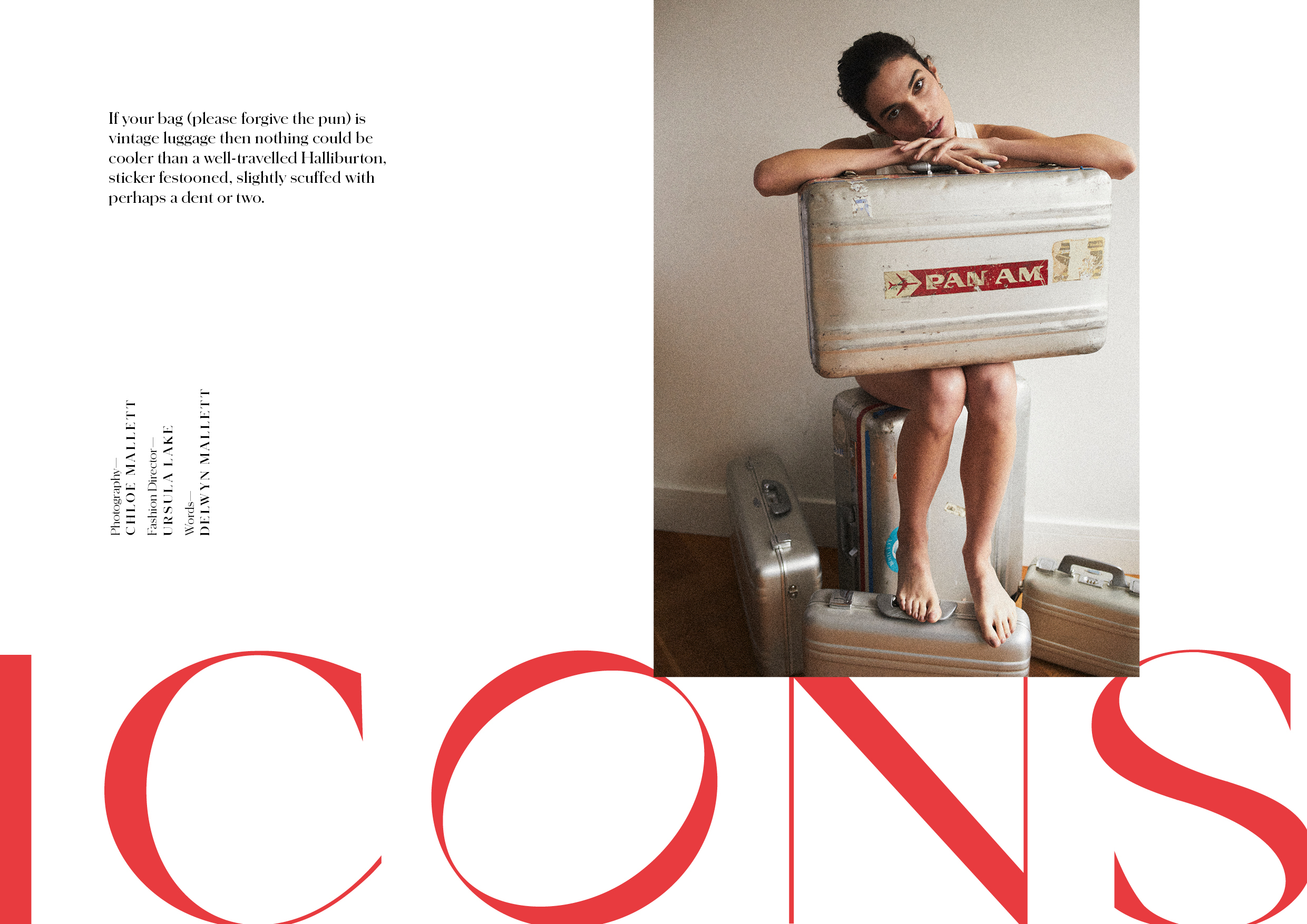 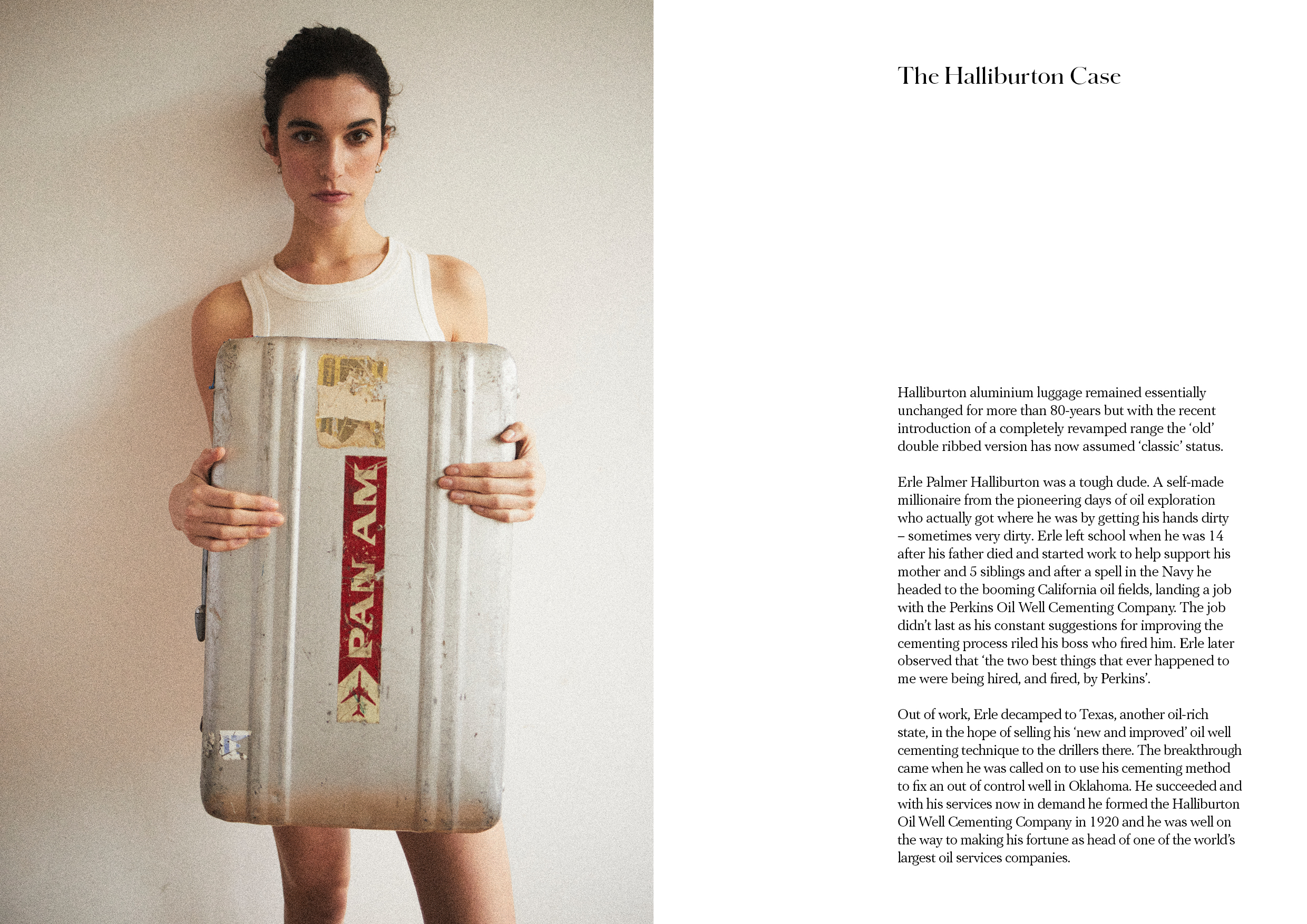 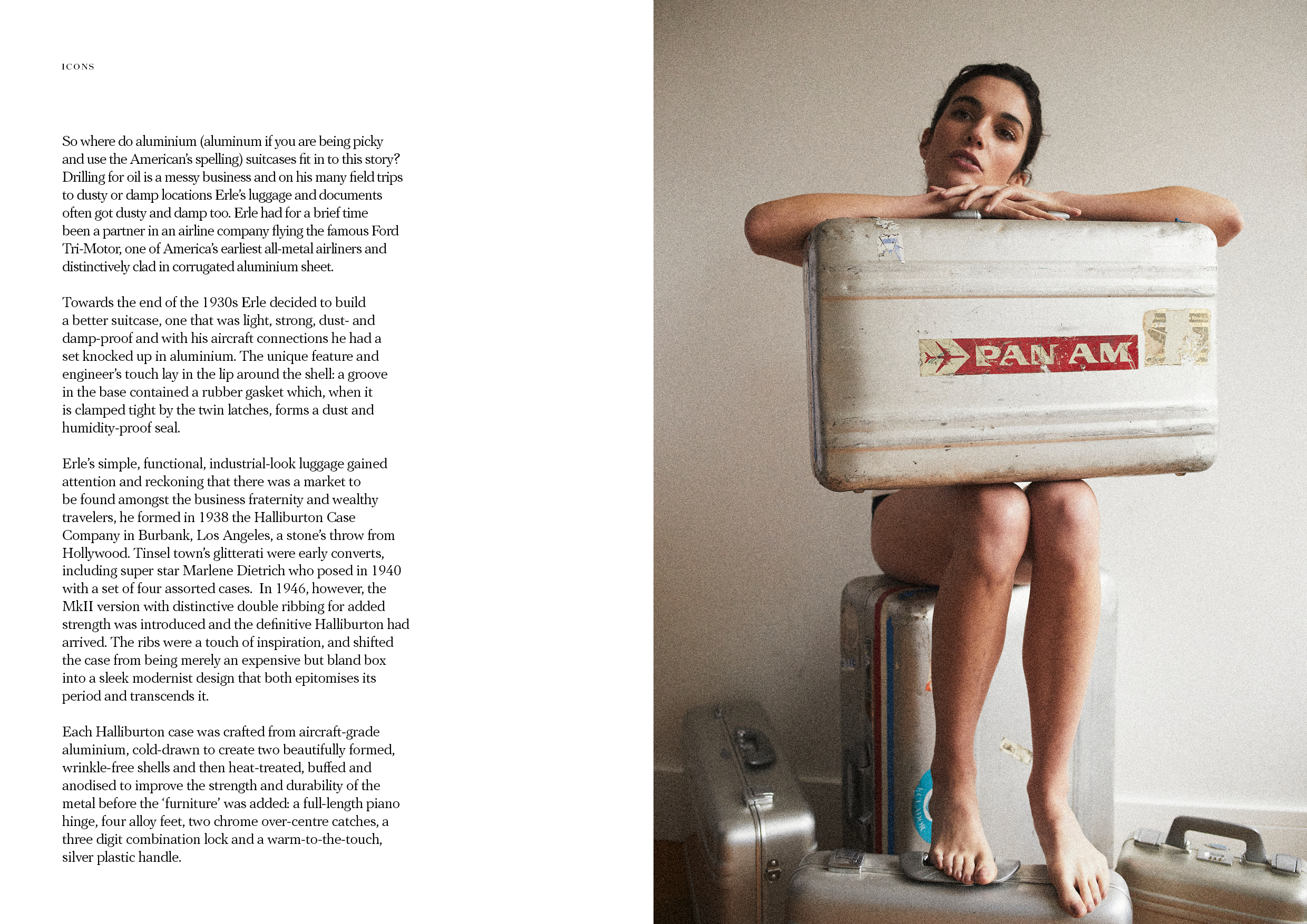 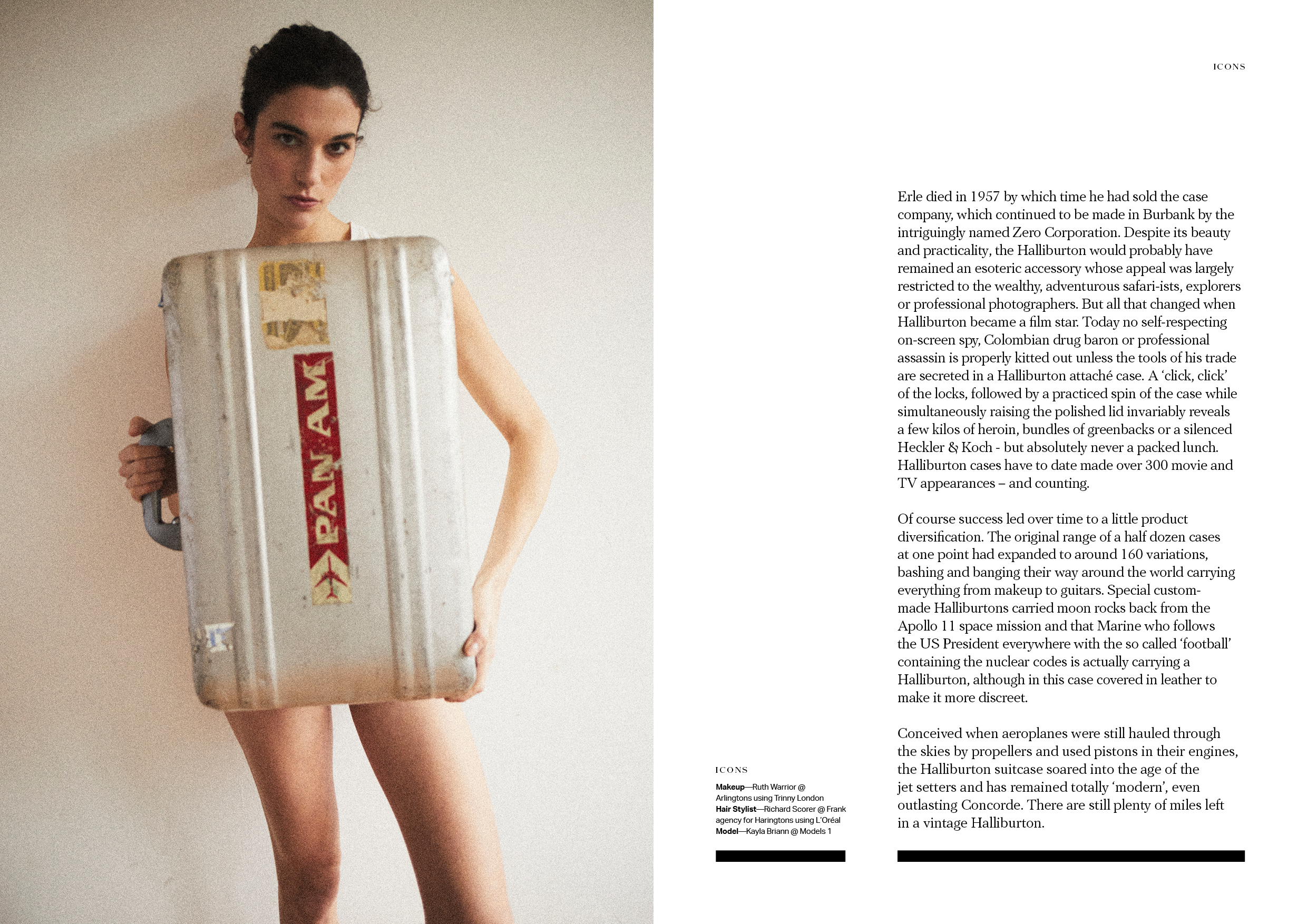