In the thirteenth in our series of design icons, we learn about the heritage of the humble, but revolutionary zip.

Although a US patent for an ‘Automatic, Continuous Clothing Closure’ was granted in 1851 to Elias Howe, inventor of the modern sewing machine, it was the ‘Chain Lock Fastener’ patented by engineer Whitcomb L Judson of Chicago in 1893 that is the precursor of the device that today we know as a zip. Intended as a time-saving substitute for the fiddly laces in the fashionable high laced boots of the day, Judson’s fastener was a fearsome ‘hook and eye’ device with four teeth to the inch, more akin to something that the Spanish Inquisition might apply to tender parts of your anatomy to extract a confession than a convenient way to hold clothing together.

Judson started the ‘Universal Fastener Company’ to manufacture his not very reliable invention but uptake was slow, even after introducing an improved version cutely named the ‘Judson C-curity Fastener’, which, too, was also found to be far less c-cure than the name implied.

In 1905 Swedish engineer émigré Gideon Sundback joined the company and dedicated his energies to improving the fastener. By 1913 Sundback had abandoned Judson’s design in favour of a ‘hookless’ system with 10 teeth per inch, with each tooth featuring a dimple on one face and a conical projection on the opposite face. Securely fastened to a fabric backing, opposing teeth were staggered by half a tooth’s height so that when drawn together by the ‘Y’ shaped channels in the slider they were forced into mesh. Play between the teeth was so limited that they could not disengage until separated by a reverse pass of the slider. Sunback had created a device that would alter the way in which our material world is fastened together and which continues to be produced in quantities measured in millions of miles. The only thing lacking was an attention-grabbing use for the fastener and a catchy name to inspire the public. After years of little commercial interest, the breakthrough came in 1923 when the B F Goodrich Company launched a range of rubber galoshes using Sunback’s fastener and advertised as the ‘Zipper Boot’. The boots came and eventually went but the onomatopoeic term remained and the market for zips expanded rapidly. Schott, the American clothing manufacturer, claim that in 1928 they were the first to produce a zip-up jacket, and the French claim to have changed men’s lives for the better when in 1937 they introduced the zip fly.

After a succession of name changes the Universal Fastener Company had, by 1937, evolved into the more aggressively descriptive ‘Talon, Inc.’, the largest manufacturer of zips in the world. In only a few decades the zipper had progressed from a little-used novelty into a ubiquitous presence in most people’s lives.

Post-WWII, as clothing production gradually moved to the Far East, the once-mighty Talon were eventually driven out of business by the more geographically nimble Japanese company YKK, which by the 1990s was producing annually 1.2 million miles of zip world-wide. In turn, YKK has been overtaken by the Chinese, with the little-known town of Qiaotou, a thousand miles south of Beijing, now producing over 80% of the world’s zippers, as well as over 60% of the world’s buttons!

The zip has added an erotic charge to the act of disrobing, provided a seemingly endless source of inspiration for graphic designers, has moved from being a hidden component of fashion to a fashion motif in its own rite – imagine punk without zips, or biker jackets without their heavy metal. Buttons just don’t do it. In 1969 a high-tech, airtight, YKK-manufactured zip sealed Neal Armstrong’s suit when he stepped onto the moon. But perhaps the most notorious and unwelcome use of a zip was on the Andy Warhol-designed cover for the Rolling Stone’s ‘Sticky Fingers’ album, which incorporated a real one let into the album sleeve – an application that still has music fans cursing as, if handled carelessly, it was all too prone to scratch one’s cherished vinyl. 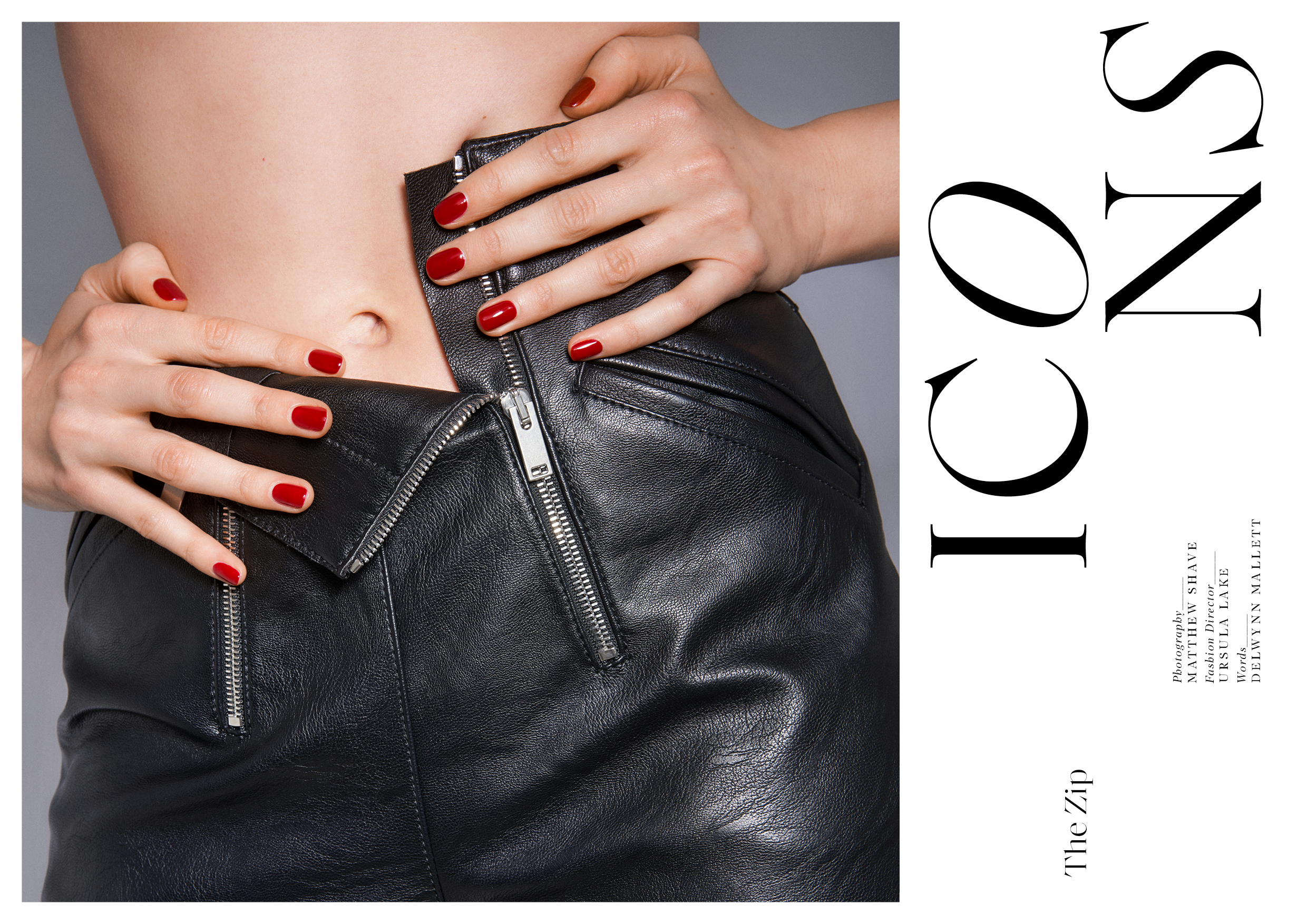 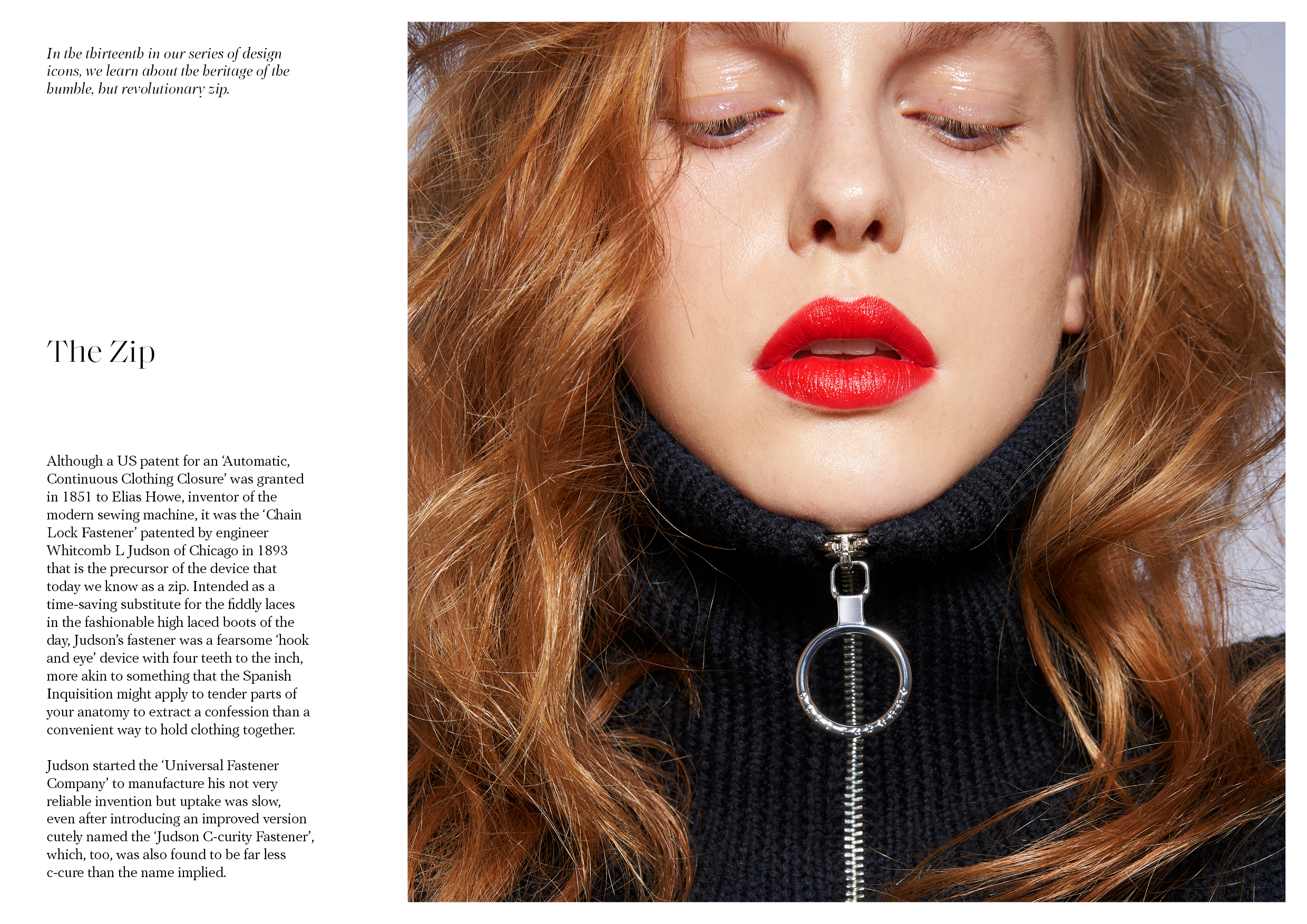 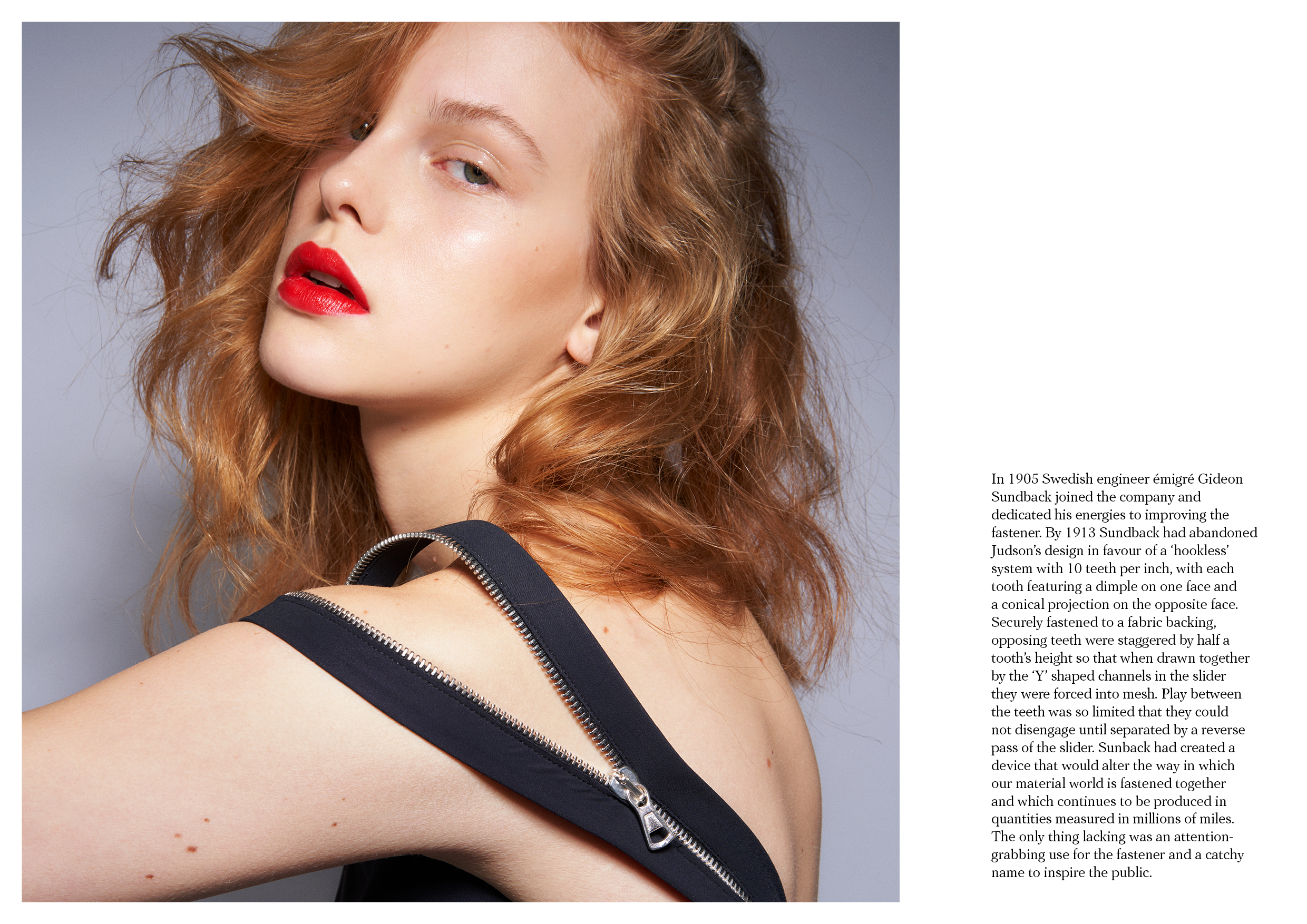 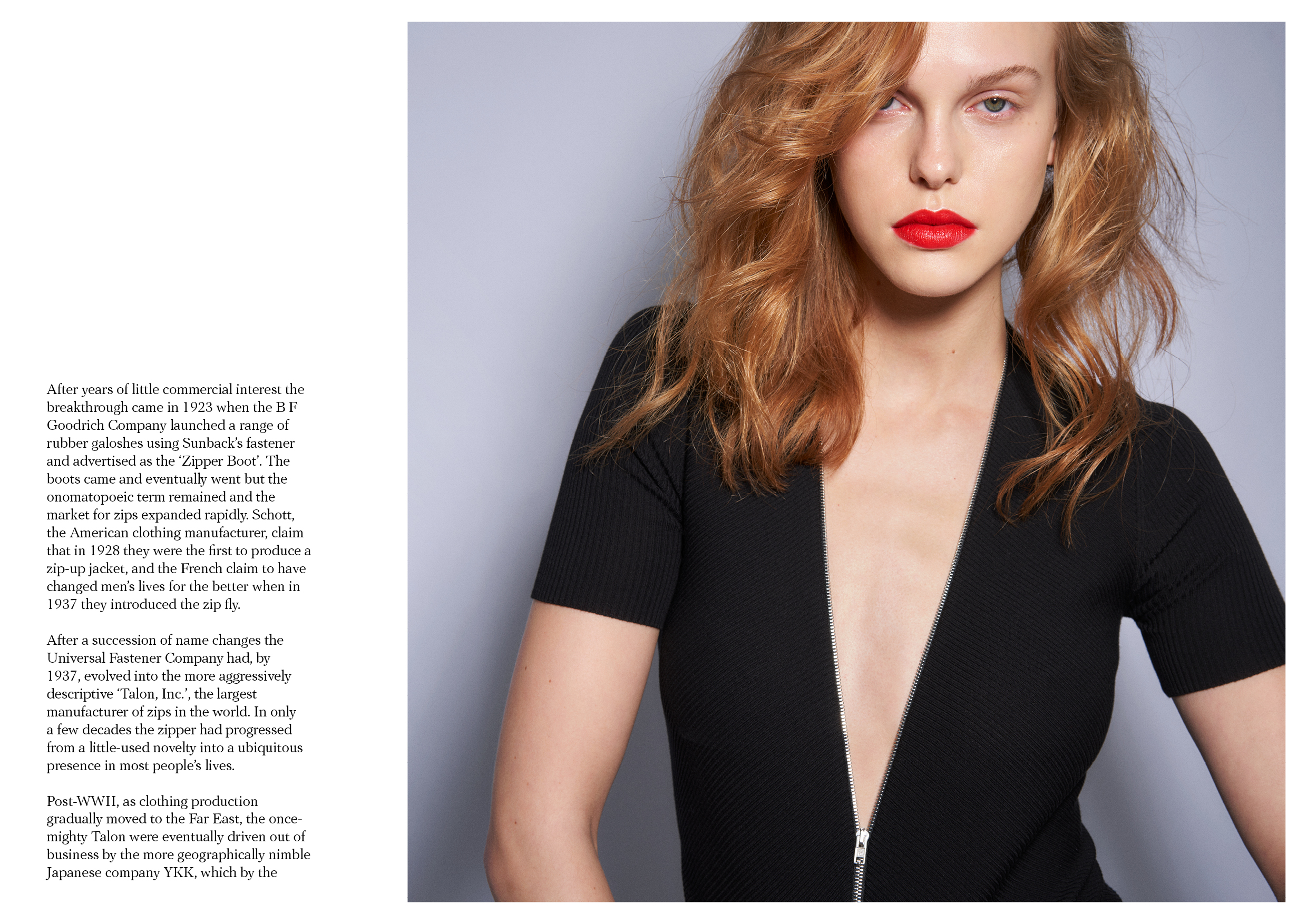 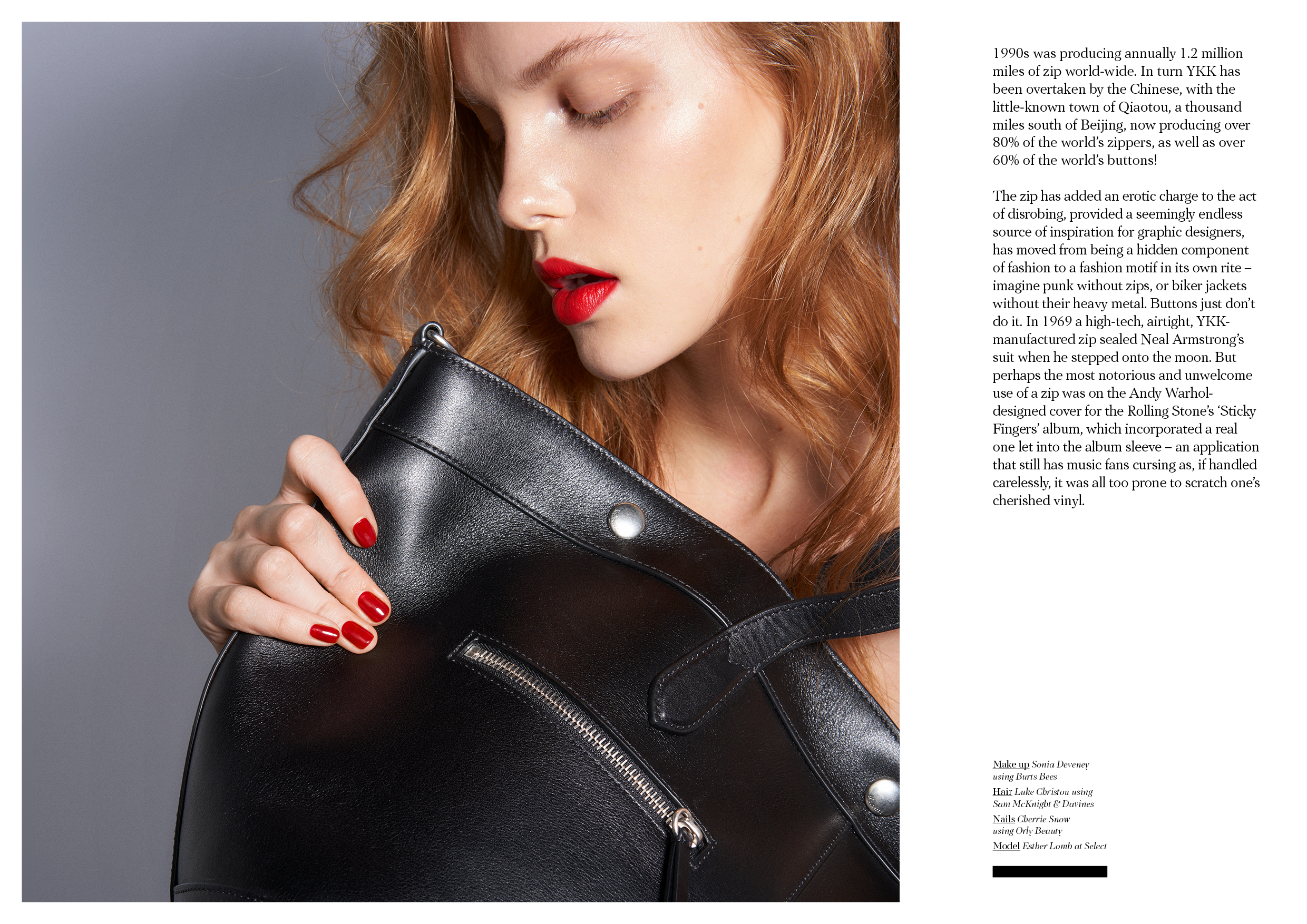