In the twelfth of our forays into the sartorial icons of our time, we discuss the rise and rise of the timeless parka

The Korean War came to an end in 1953 and as the demobilized and no doubt relieved GIs handed in their winter issue parkas none, in their wildest imagination, could have predicted that a decade later those very same garments would clothe a teenage army in another battle, albeit far less lethal, on the English holiday beaches of Brighton and Margate.

I started Art School, just west of London, in 1963 as the Mod phenomenon was gathering momentum. I was 17 and couldn’t afford a car but a scooter was just within reach. As Ray Davies of The Kinks would soon so succinctly and satirically put it in his 1966 song, we, as Mods, were ‘dedicated followers of fashion’. With much of a young man’s income spent on smart clothes, for the scooter-borne an outer garment that could protect the investment from the elements and the grime of the road was essential. No one will ever know which Mod was the first to buy a government surplus parka but with the rapidity of a measles epidemic every scooter riding Mod, and usually his girlfriend passenger too, was soon infected and turned a military shade of green.

WWII and the Korean War had dumped an enormous amount of redundant military clothing into the consumer market and army surplus stores had sprung up all over the country. One of the most well known and visited was Laurence Corner which, as the name suggests, was a corner shop situated in London’s Hampstead Road, NW1. The shop was not only frequented by Mods but also by much of pop ‘royalty’ of the day. Coincidentally Laurence Corner opened its doors for business in the same year that the Korean War finished. (Sadly it closed in 2007.)

In protracted wars armies have had to fight not only the enemy but also adverse weather conditions that often cause as many casualties as the fighting and during WWII the United States produced a variety of extreme weather garments of varying efficiency for its forces, land, sea and air.

Post-war, applying the lessons learnt, the Army set about designing better cold weather protection for its ‘grunts’, resulting in the so-called ‘fishtail’ parka, first issued in 1948. In the staccato nomenclature of the military it was designated as, Parka-Shell, Cotton, Olive Drab, M-1948, with a matching button-in mate called, Parka-Liner, Pile, M-1948. M was of course for military and the combo of cotton sateen outer shell and wool pile liner with attached wolverine fur-trimmed hood made for formidable cold weather protection.

The M-1948 proved to be an expensive garment to produce and in 1951 with the Korean War in its second year it was replaced by an equally efficient but less expensive to manufacture version, not surprisingly dubbed the M-1951. The parka was amply proportioned and intended to be worn loose over field uniform to allow for maximum movement and its nickname, coined by some anonymous GI wit, derived from its pointed, fish-like tail, which was designed to be drawn through the legs like a giant nappy and secured by an integral drawstring to keep the elements out and warmth in.

The word parka is derived from Nenets, the language of the indigenous tribes of Northern Russia – and describes the long hooded outer garment that they wear to protect them from the Arctic weather and it is said to be the only Nenets word to be adopted into English. Not, of course, to be confused with that other garment worn by the hardy inhabitants of the Arctic Circle, the Inuit anorak.

The Who’s 1973 rock opera, Quadrophenia, with album cover artwork by Graham Hughes and photo story by rock photographer Ethan Russell, firmly fixed the parka-clad Mod into the cultural iconography of the 1960s and also inspired the Mod revival of the late 1970s.

It’s doubtful that many Mods gave much thought to the origins of their parkas but the persistence of the revivalists has ensured that the Fishtail Parka lives on, with original M-1951s being much prized amongst aficionados.

For those who enjoy a good pun, of the many Mod bands that emerged in the `70s one that must be mentioned is the short-lived but wittily named, Merton Parkas, formed, where else, but in that particular suburb of South London.

Hair and make up by Ruth Warrior

Model: Sibui San at Next Models.

‘Tulip’ Parka pictured throughout by Will and Pop 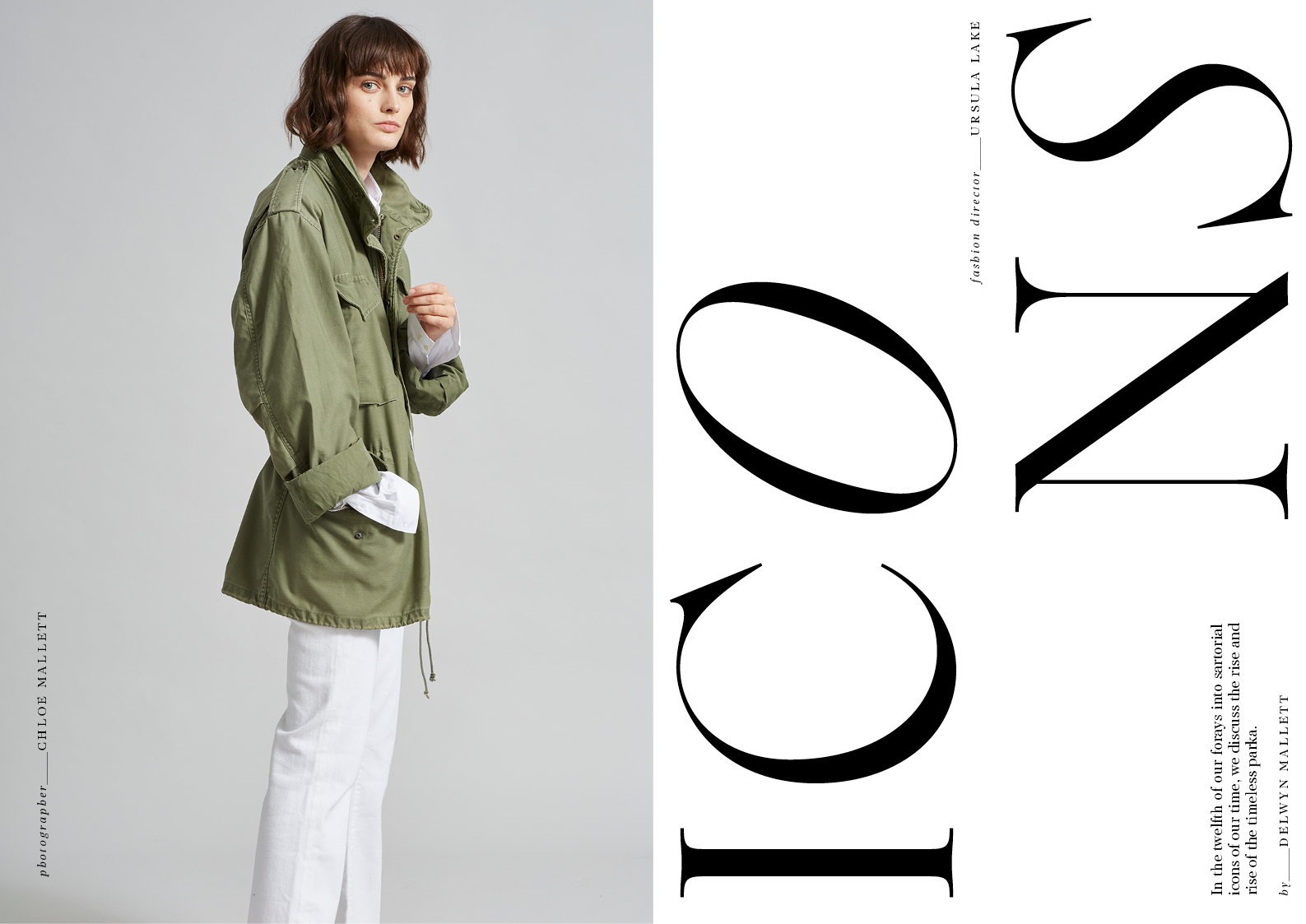 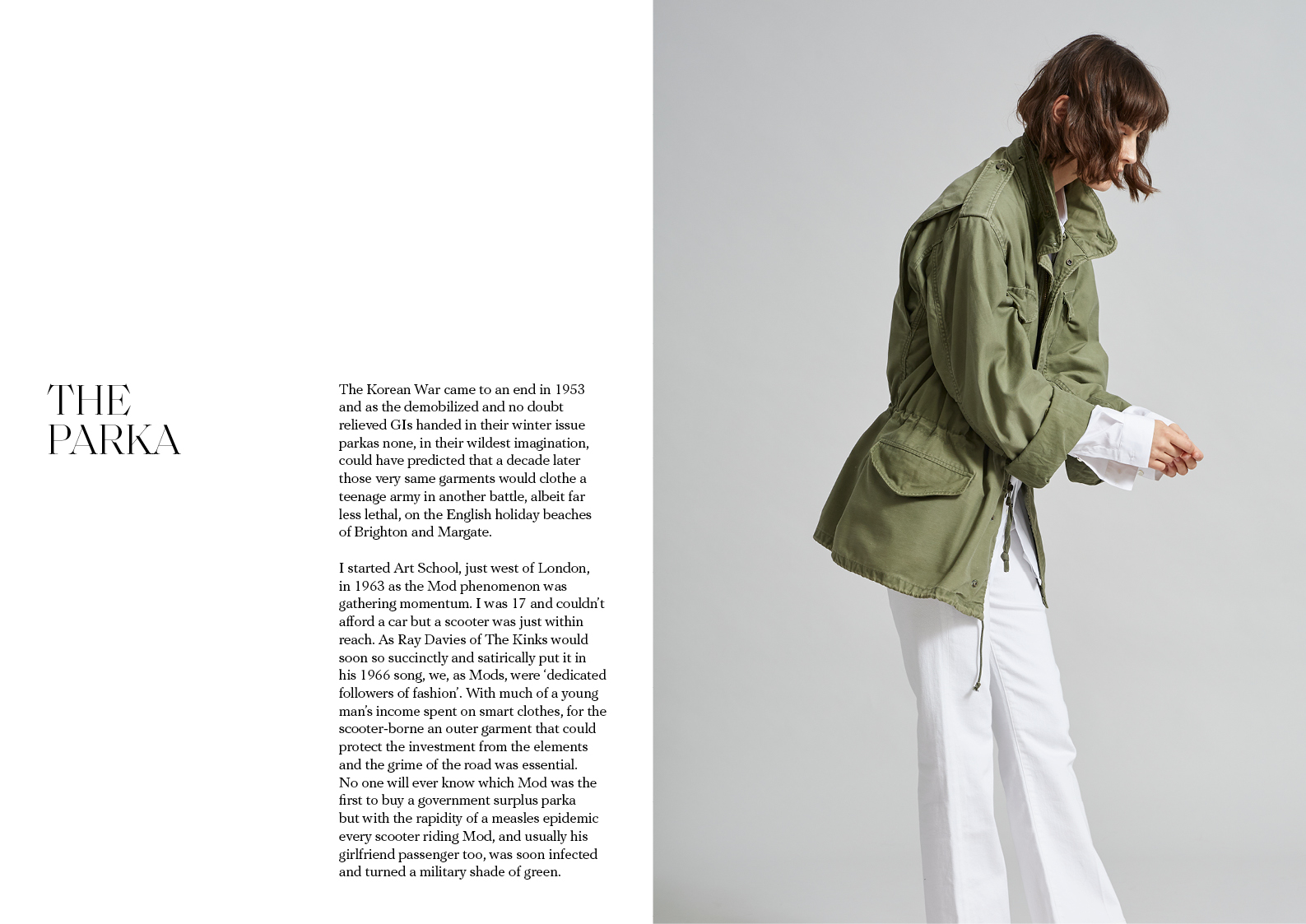 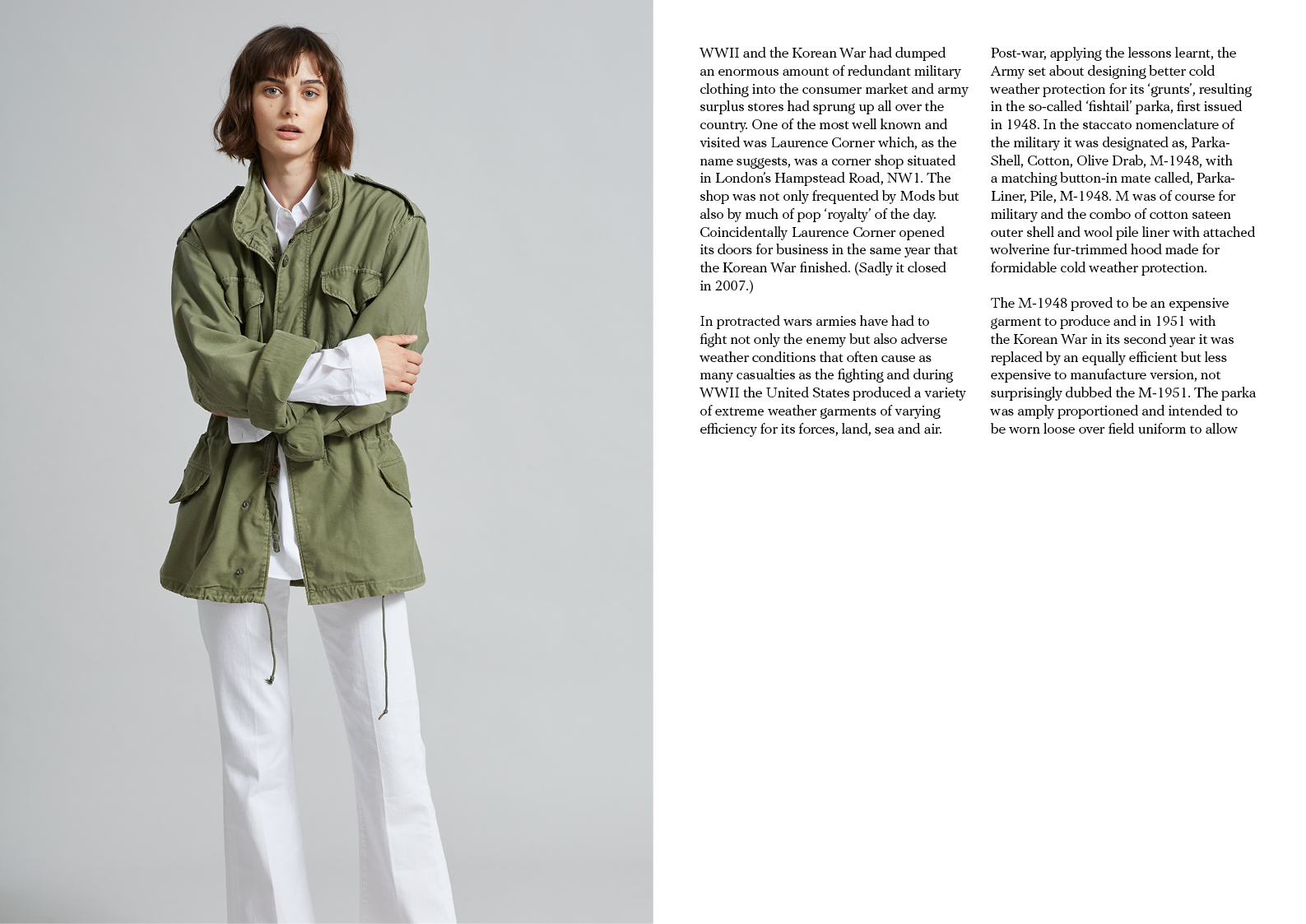 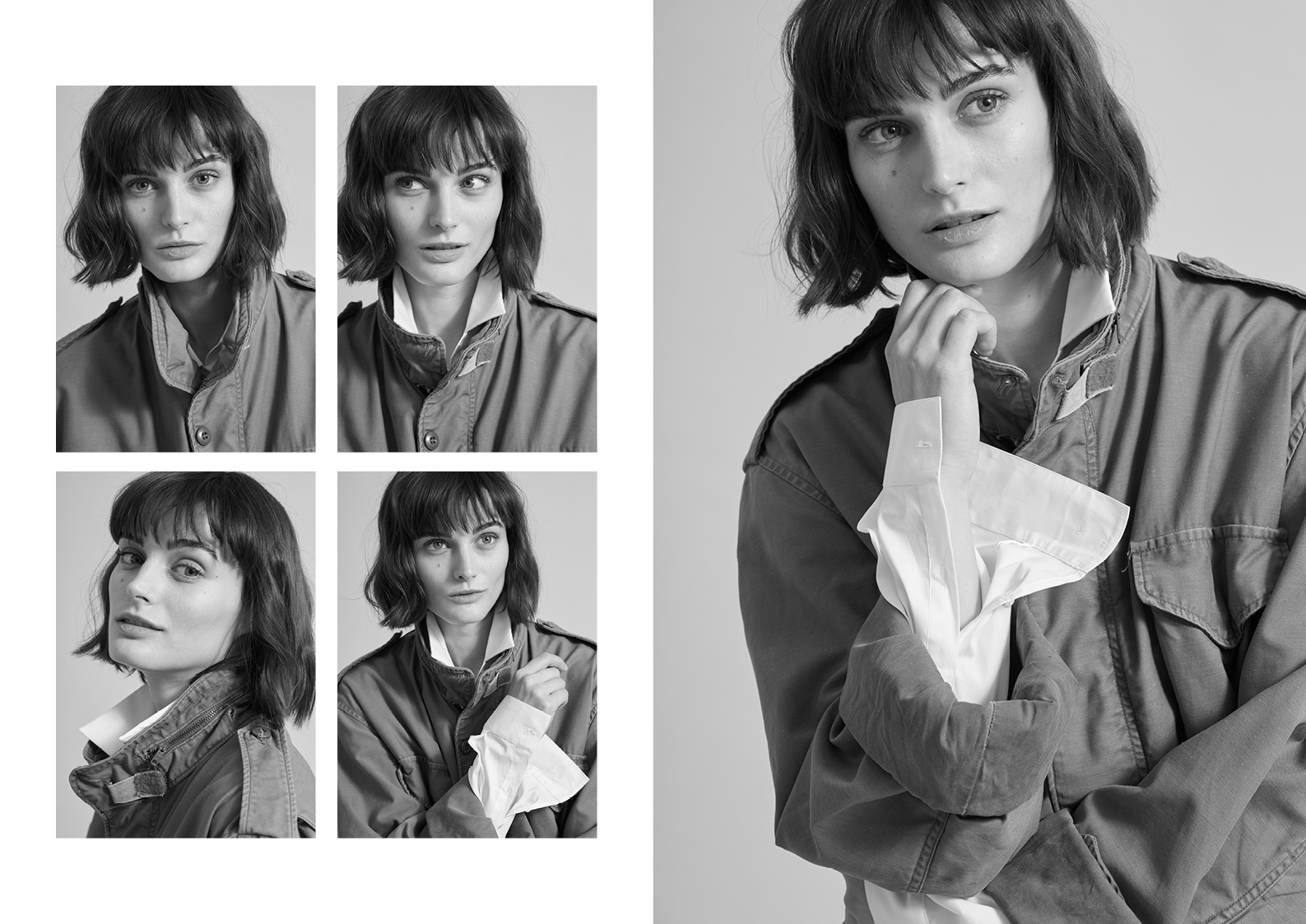 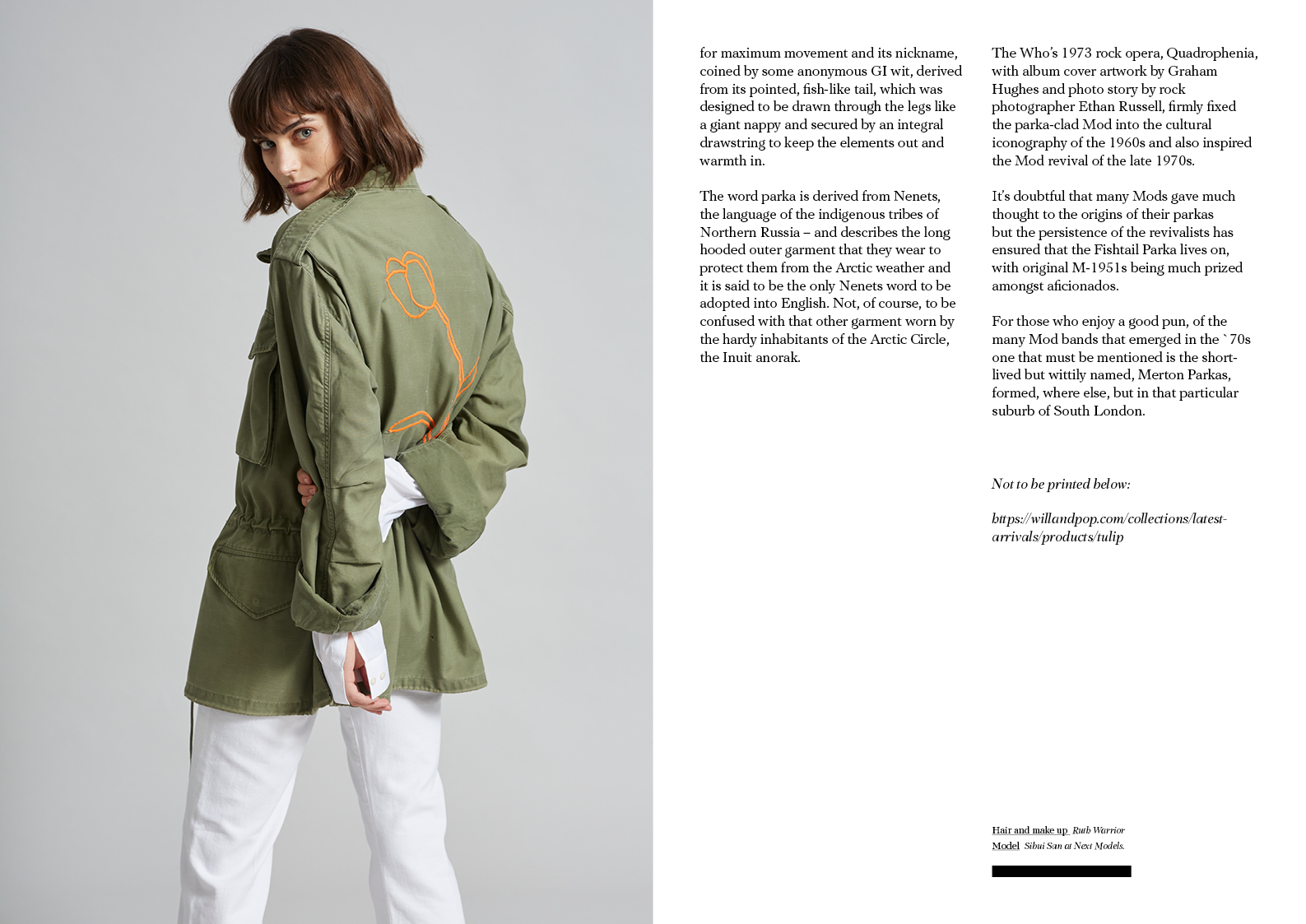 Hair and make up by Ruth Warrior
Model: Sibui San at Next Models.