Make meets the sculptor and jewellery designer, Bibi van der Velden, in her Amsterdam atelier to learn about her work and to hear about the exhibition that she is currently involved with at the Hermitage Museum.

Overlooking a canal in the prettiest part of Amsterdam hides Bibi van der Velden’s atelier. The lofty, light space is filled with alabaster sculptures, plants and, of course, jewellery.  With her enviable mane of blonde hair and piercing blue eyes, Bibi could easily be mistaken for one of the mermaids that often feature in her work.

Bibi was born to Dutch parents in New York. Her mother was a sculptor and her father was a banker and despite his more traditional job, the family travelled a lot when she was young, eventually ending up in England where her two brothers were born. The family lived in a romantic–sounding, historic pile in Surrey with its own resident ghost, some priest holes and gardens and woods to explore which she freely admits fired her imagination as a child.

Growing up, Bibi describes herself as being a tomboy, always outside in nature, building huts and tree houses with her brothers, but also helping her mother with her work, polishing her sculptures and working in mother’s studio. Her brother was born exactly a year after she was, and Bibi has been told that while her mother was busy with her brother, she was given a box of necklaces to play with and her mother credits this formative experience as being the cause of her interest in jewellery.

Bibi’s childhood and her development as an artist was impacted by the rich creative vision of both her parents. She says she always knew that she would be a sculptor like her mother but also acknowledges the influence of her father. She describes him as having a very singular, detailed vision of how things should look in their home.  He would often take the family on wood-chopping adventures in the woods, setting up idyllic picnics with the wicker baskets laden with food, beautiful china and ornate rugs they had brought with them.

At eighteen, Bibi moved to Italy to study fine art in Florence, in a very academic art school with live models and detailed anatomy classes. This was in direct contrast to the more conceptual art school she attended next, in Amsterdam. However, throughout her studies she continued to making jewellery in her spare time. This eventually led her to doing a jewellery making course at Goldsmiths college where she learned the more formal aspects of her craft as a jeweller.

She quickly launched her eponymous brand in 2004 and started working with designers at Amsterdam fashion week creating work which married her love of sculpture and jewellery, making body art for the shows. The shows were very successful and helped to launch her brand and establish her as a designer.

Four years ago, Bibi launched the online luxury jewellery website Auverture, a beautifully curated, shop-able collection of incredible jewellery in diverse styles, from over fifty different designers from around the globe.

In this competitive world, it is perhaps a little surprising that one jeweller would create a platform that both celebrates other designers’ work but also sells them. However, Bibi explains that the concept is about creating a community of true artists who each have an individual, strong design signature where they stay true to their design tenets, so there is room for everyone on the site. It was also born out of a desire to support the boutique or smaller, emerging brands. These designers often come up with creative design concepts, only to be copied by the bigger, more established brands. So, this provides an opportunity to reach a wider audience more quickly than they might achieve on their own. It’s an active stand against what Bibi describes as the ‘mass produced luxury’ that is prevalent in the jewellery world. She dislikes the lack of consideration over the fine details such as where things are produced, the materials used and the environmental impact of the item.

What is very evident in Bibi’s work is the importance of the natural world; she admits that anything and everything in nature serves as creative inspiration, from the stars in the sky to waves on the beach, which is reflected in her jewellery.  Although her designs celebrate all aspects of nature, she features not only the outwardly pretty aspects in the flowers and the butterflies, but the decay and the less attractive, more maligned insects like slugs. She describes herself as being a 3–D thinker and says she finds it easier and faster to work out her ideas and designs in clay or wax, her work process echoing her sculptor’s background. The end result is jewellery that is truly wearable sculpture, blending beautifully the inspiration from the natural world with expert craftmanship and symbolism to create unique, talismanic pieces.

Sustainability is also very important to Bibi. She is an ambassador for sustainable gold mining and uses fair-trade components and recycled gold in her work, preferring to use pre-sourced elements for her work rather than further deplete the earth’s natural reserves. Also key to her work is a sense of humour: fun, flamboyance and an element of surprise are evident in her designs; tiny monkeys hang off lemon quartz banana earrings and diamond studded mermaids’ tails wrap around a neck.  Rings can be opened up revealing a smaller ring and a golden alligator with articulated, moving paws, bites his own tail to create a ring but can also snap on to a chain to become a pendant.

Recently Bibis has created a unique piece that is currently being exhibited in an at the Hermitage Amsterdam, the sister museum to the famous Hermitage in St Petersburg.  ‘Jewels! The Glitter of the Russian Court’ focuses on the jewellery and wardrobe of the Russian royal family and is an incredible insight into the private life of the Romanovs and their court. Bibi’s inclusion in the exhibition is a huge sculptural piece created from sustainable gold and Gemfields rubies, pink sapphires, emeralds and diamonds.

The Momento Mori Ring’ was inspired by both the Netherlands and Russia via the influence of 17th and 18th. Century Dutch still life paintings and the opulent and extravagant use of coloured precious stones in the jewellery of the court of the Russian royal family.  The name of the piece itself suggests the unavoidable fact of one’s mortality, but serves as a reminder that you must also remember to live. The main body of the ring is a nearly wilted tulip that has already has ants and maggots on it that are eating away at the flower, however the ants are also laying eggs and in the centre sits another egg created from a 600,000-year-old mammoth tusk found in Siberia, the story represented in the ring clearly illustrates the inevitable circle of life.

The pinnacle of luxury in her work, Bibi explains, is a bespoke piece co-designed with a client which has their individual story woven into it. This culminates in a final unique piece that is something that will set them apart from everyone else and creates an heirloom for the future, that in time will tell a story about their ancestor to the following generations. A concept that definitely would have appealed to the ill-fated Romanovs.

You can see more of Bibi’s work at:

Jewels! The Glitter of the Russian Court runs at the Hermitage Amsterdam until the 15th of March 2020. www.hermitage.nl 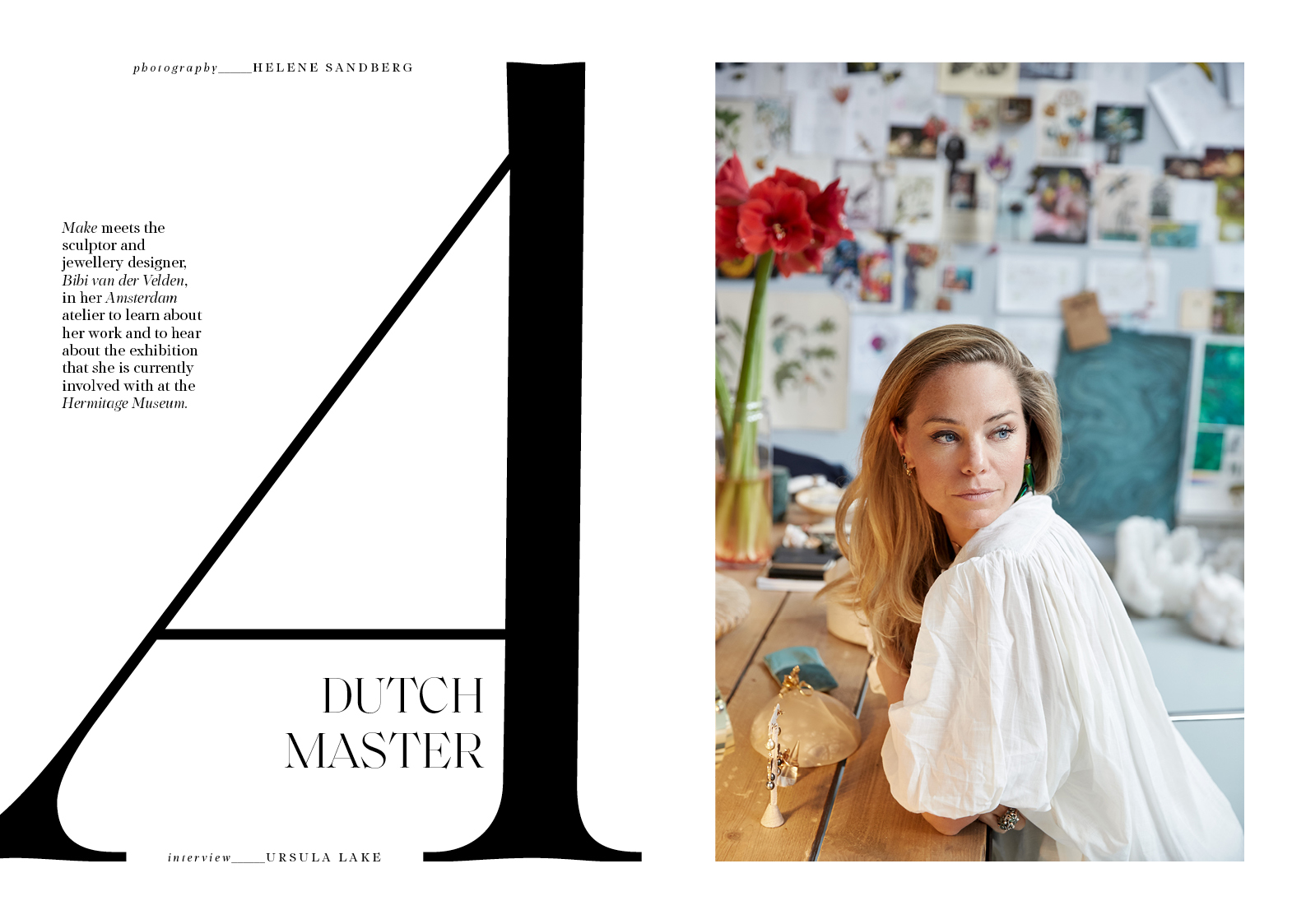 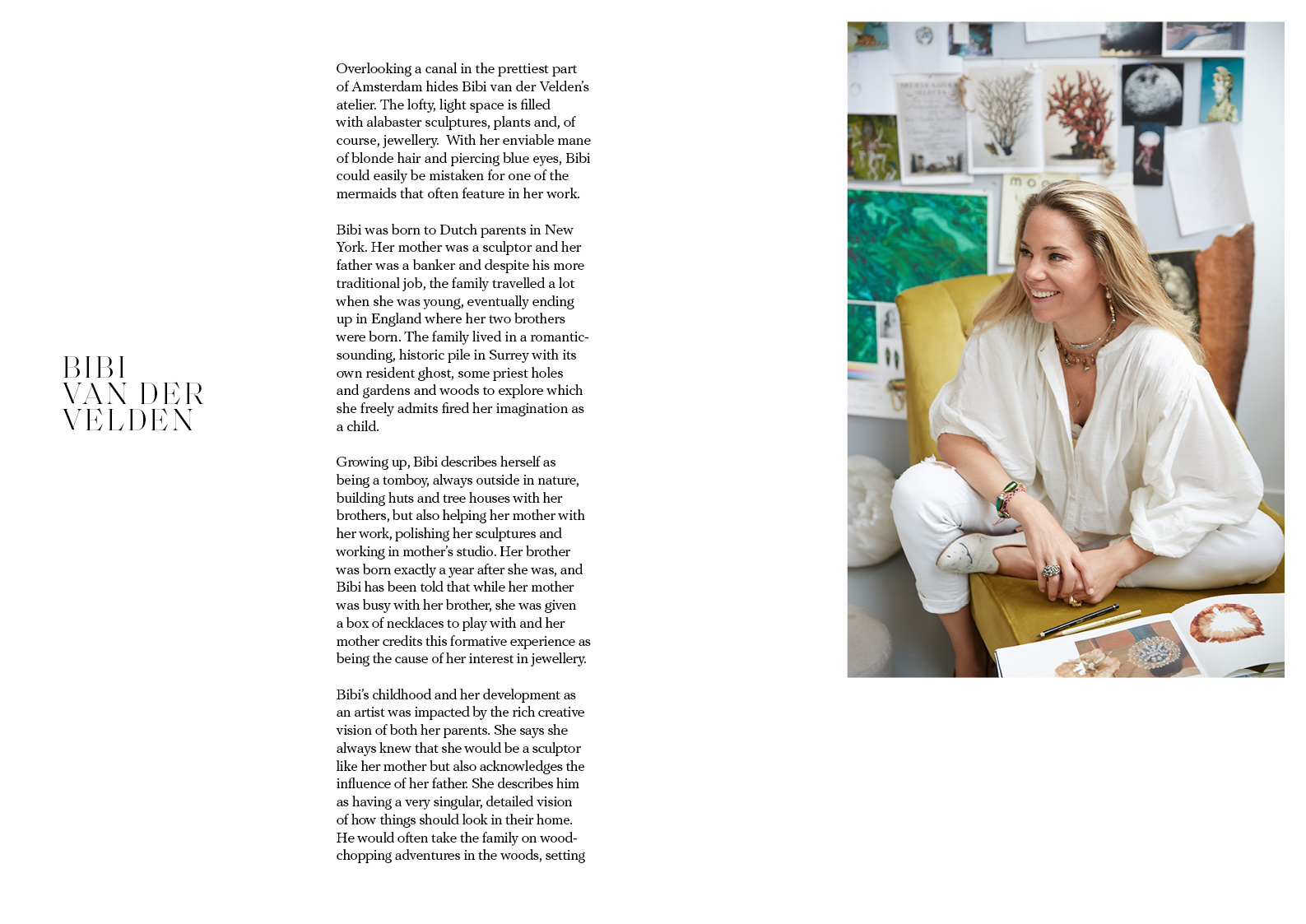 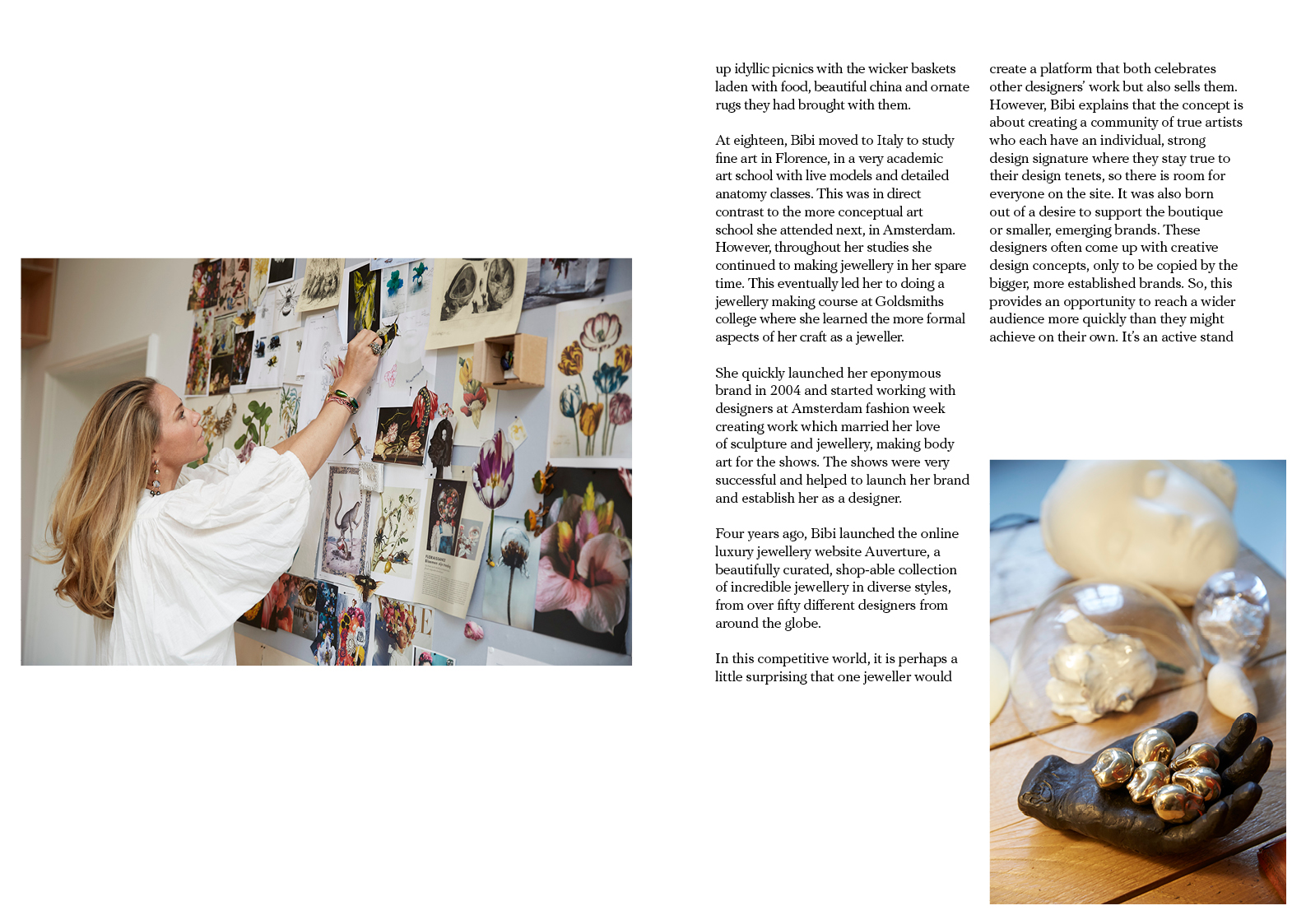 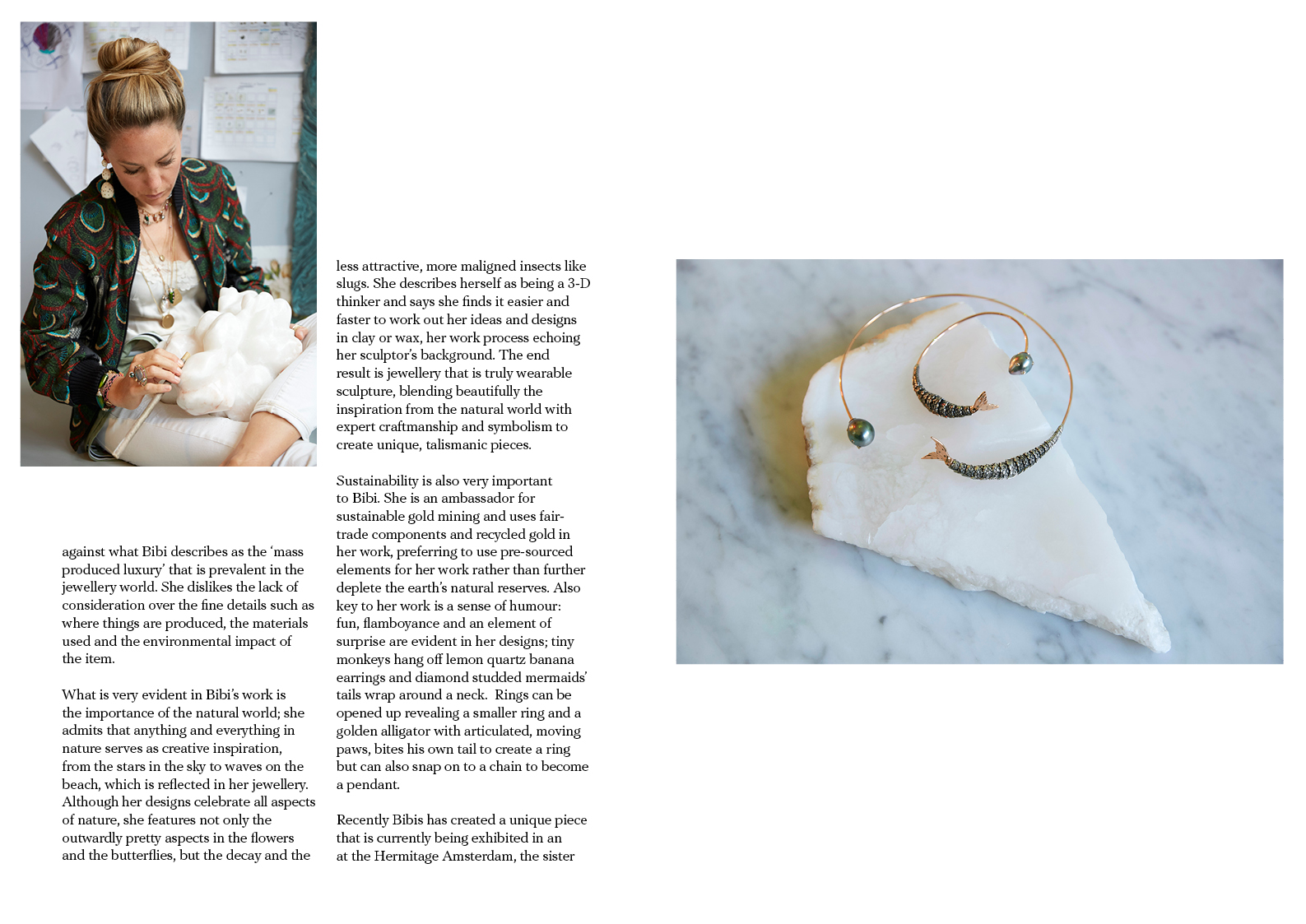 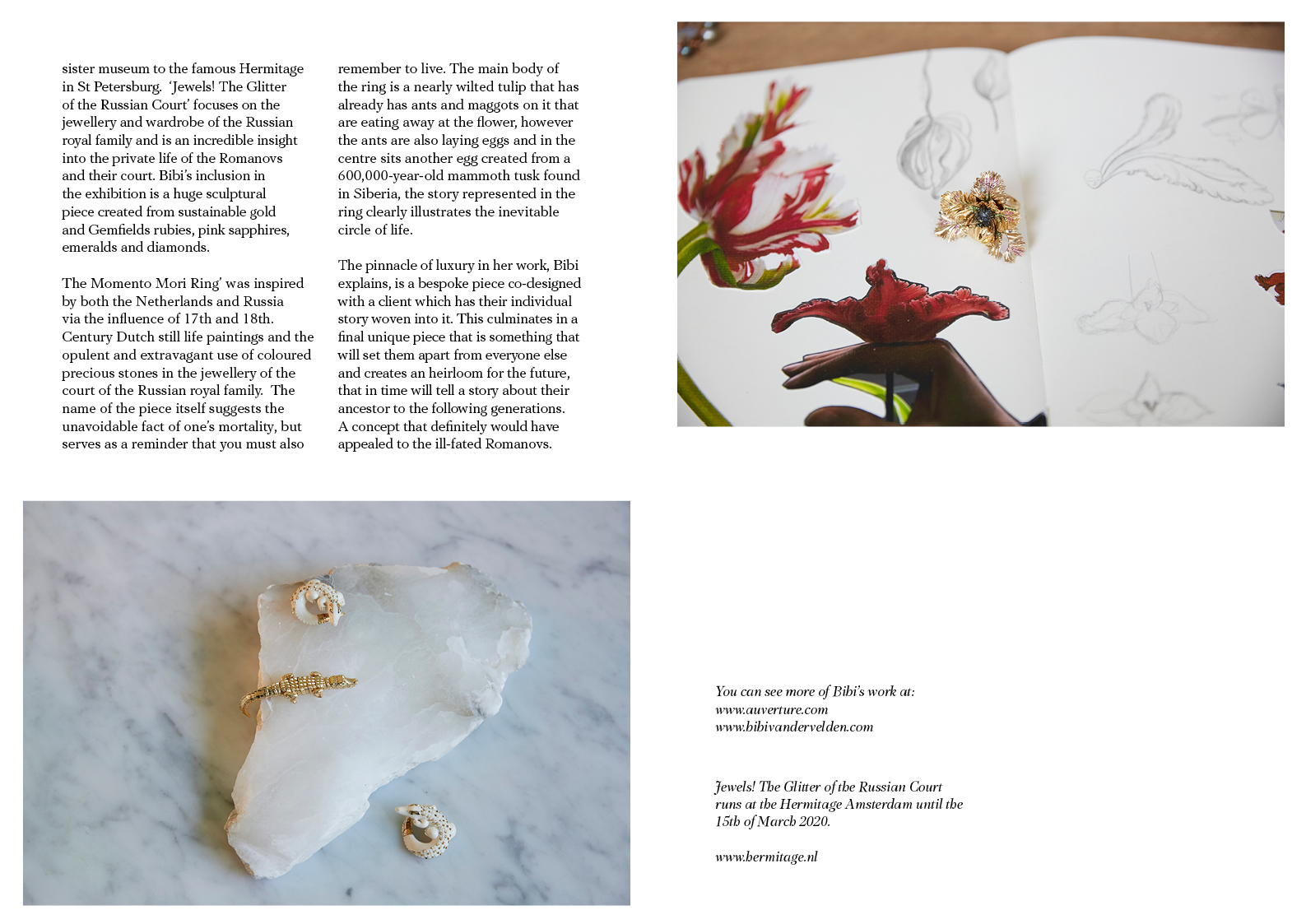