The British people were offered a blessed reprieve from fretting over Brexit in the summer of 2018. In July, instead of reading about, worrying about and thinking about catapulting ourselves out of the EU with no deal, news broke that a Downton Abbey film was finally happening. Make chats to Laura Carmichel or Lady Edith as she is known to millions globally, to find out more.

Say what you like about the ITV series, but its gilded world of aristo dramas and servant shenanigans feels like the tonic one needs in such times of political turmoil. And its fans overseas agree. According to ticketing company Fandango, Downton Abbey sold more pre-order tickets on its first day in the US than any other drama film this year, including Quentin Tarantino’s summer smash hit Once Upon A Time In Hollywood. Laura Carmichael, taking up the mantle once more of Edith, now the Marchioness of Hexham, is positively gleeful about its return to screens, albeit cinema screens. ‘I was soooo excited,’ she says about the final cut she saw in New York last month, ‘I hope that the fans are going to love it; it’s bigger and better.’ That it is. The film picks up in 1927, and the house, both upstairs and downstairs, is in a fevered state. King George V and Queen Mary are coming to visit.

At the end of the sixth series, Edith had finally triumphed, marrying Bertie Pelham, the 7th Marquess of Hexham. By the time we meet again, she has established herself as the mistress of Brancaster Castle and commander of a social calendar quite as hectic as Downton’s. Only those who bore witness to the ebb and flow of every romantic tribulation – getting jilted at the altar by Sir Anthony Strallan; having her lover’s illegitimate child in secret – can truly understand how much of an ‘oo-er’ moment this was for Edith, the middle sister caught between two shining siblings. There are articles dedicated to ‘Every Miserable Thing That Happened To Lady Edith Crawley on Downton Abbey’ online, for goodness’ sake. ‘I always rooted for her,’ says Laura, ‘She showed kindness, forgiveness and could be the bigger person at the end of the day. And she’s got a great wardrobe.’

It’s the youngest Crawley daughter, Lady Sybil, who’s often cast as a revolutionary for carrying on with the chauffeur, Tom Branson, but it was Edith who learnt to drive and rose through the ranks at a newspaper. I wonder if Laura wished her story hadn’t been tied up with marriage. ‘The audience craved, having watched her being tortured for such a long time, this fairytale ending,’ says Laura, but admits that the way Edith expanded her world wouldn’t have been possible if she had settled earlier. ‘It was after being jilted that she started writing,’ she explains. ‘She kept learning about herself and kept being in charge of what her life was going to be without just getting married. What’s interesting about Bertie is that they met and fell in love before he was a marquess and while she was working at the newspaper. She found someone she could be happy with who wasn’t interested in her because of her title – and she wasn’t interested in him because of his.’

One of the overarching, and inescapable, themes is the necessity for the Crawley women to make prudent matches because they can’t inherit Downton on the occasion of the Earl of Grantham’s death. The word ‘spinster’, a favourite of Generation X’s Bridget Jones, is often invoked by Edith. Does Laura think that similar pressures, possibly without the problem of endowment, are facing women today? ‘I guess so,’ she says carefully. ‘It was a very different world, but I think there is a great deal of pressure on women. We put pressure on ourselves to achieve certain things that are sometimes out of our control. You can’t pick when you meet the person who makes you happy or the job that makes you happy,’ she explains, ‘You just have to keep doing the best you can and be kind to yourself.’

Another pressure facing a lot of women, both in their private and professional environments, is to always be likable. Whether we cast ourselves in these roles or not, it has traditionally fallen to us to be the pacifiers, the soothers, and the mediators.  Edith, on the other hand, is often unlikeable, especially in her sparring matches with her elder sister Mary. ‘I feel very fortunate to have strong women in my life who have shown me that you can ask for what you want without worrying that you’re being difficult. On the Downton set, I was surrounded by actors who fought for what they thought was the right thing without being concerned that it made them a diva.’ says Laura. A professional setting is one thing, but what about how she comes across as a person? ‘I don’t think about the way I present myself as an actor too much,’ then pauses. ‘Maybe that’s not true, maybe it’s impossible. I think if you worry about how people perceive you, particularly in this job, you will go mad. If you’re lucky enough to have people you care about and, in their eyes, you’re a good person – your family and your mates – then that’s the way to stay sane.’

Laura, recently 33, has had years of practice. The first series of Downton aired almost a decade ago. ‘My God, I definitely have changed,’ she says of the ageing process on set, ‘I went through my entire twenties on the show and it was like being at school for six years.’ The kind of school where your ‘classmates’ are the likes of Jim Carter and Penelope Wilton, both of whom are monstrously good at downtime crossword puzzles, and Dame Maggie Smith, who’s more of a Bananagrams fan. ‘Asking the right questions was what I learnt. Maggie is the greatest example. Even if she had a funny line, if it didn’t feel right, she would figure out a way to do it in a way that felt honest. In doing so, she made it funnier. That’s her talent,’ she says. It was also the ‘break’ she’d been waiting for. ‘I could suddenly call myself an actor. I’d graduated from drama school and was living in London, trying to make it in some way, working in bars and a doctor’s surgery and doing all of these random jobs.’ The best advice she has for young actors in similar positions is to keep going. ‘I feel so lucky. You wouldn’t have bet on me getting this job when I got it,’ she says. ‘That’s why it’s kind of addictive for actors because you know that you’re one job away from something changing. Being kind to yourself in that process is the advice I would give because it’s tough. You have to slightly surrender yourself to it and keep believing in your ability.’

She grew up in Southampton – as the middle child of three sisters if you can believe it, though she insists they’re best friends with none of the Crawley competitiveness – wanting to be a ballerina and eventually attending the British Old Vic Theatre School. ‘I was immediately addicted and thought I want to do this forever,’ she says of her childhood drama club sessions. When I ask if she was an outgoing youngster, she immediately demurs. ‘I do feel like quite a shy actor,’ says Laura. ‘Some things terrify me that I know other people would say, ‘Yes, I’ll do it.’ I’m like, ‘Don’t ask me.’ The thing I love most about acting is the community aspect. You feel stronger for being part of a collective.’

After the promo tour for Downton wraps, she’ll be re–joining her other ‘collective’ to reprise her role as Maggie Pole, the Countess of Salisbury, and film the next installment of The Spanish Princess, Philippa’s Gregory’s historical novel about the young Catherine of Aragon. ‘Philippa books are focused on the female perspective of these famous periods for men,’ says Laura. She’s also just finished working on six-part series The Secrets She Keeps in Australia, a ‘domestic noir’, she tells me, about two pregnant women whose paths intersect at this crucial moment in their lives. ‘I love looking at women in their kitchens. ‘Jess [De Gouw] plays this mummy blogger who has a ‘perfect’ life and [my character] Agatha is very envious of it. It felt really challenging,’ she says.

A story with pregnant women at the centre isn’t something you see often on the telly. I ask Laura whether she’s interested in stories that sit outside the mainstream and more in the margins. ‘Definitely,’ she says and agrees when I bring up the issue of representation on our screens. ‘I think we’re demanding more of the people who decide what we watch. We want to have dramas that reflect the world we live in – and for a long time that has not been the case.’ She recently binge-watched BBC’s Years and Years and Netflix’s When They See Us, the powerful retelling by Ava DuVernay of the Central Park Five and their wrongful conviction for the murder of a woman in 1989. ‘That was absolutely vital television. It was a tough watch, but it is really important that we all watch it.’

Another favourite is Phoebe Waller Bridge’s Fleabag.  While she agrees wholeheartedly that Phoebe is making female filmmakers more visible, she hopes they’ll soon come a time when we don’t have to reference gender when we discuss her work. ‘The more that is the norm, the less we have to ring-fence it as, ‘This is a drama or comedy for women.’ The time is coming where people will go, ‘She’s just the best.’’ What about the working environment for female actors, crew and production staff? As someone on the inside, has it changed post-MeToo? ‘I’ve talked so much about how Downton was such a lovely environment to work in. I think I’ve been very fortunate,’ she says, but acknowledges that the culture has definitely shifted. ‘You’re not going to get a casting breakdown for ‘the fat friend’. That just doesn’t happen anymore.’

When the tour wraps, she’s going to head home to boyfriend, and fellow Downton alumnus, Michael Fox and their dog, Ned, for walks on Hampstead Heath. Just before our call ends, however, I have to ask, does she feel like the Downton chapter of her life is closed? ‘In some ways, yes, but everyone’s like, ‘We’ll just do another one,’’ she laughs. ‘Downton was so significant for us and was this big thing on telly around the world. I don’t think we’re ever going to not talk about it and thank God we’re all ok with that.’ 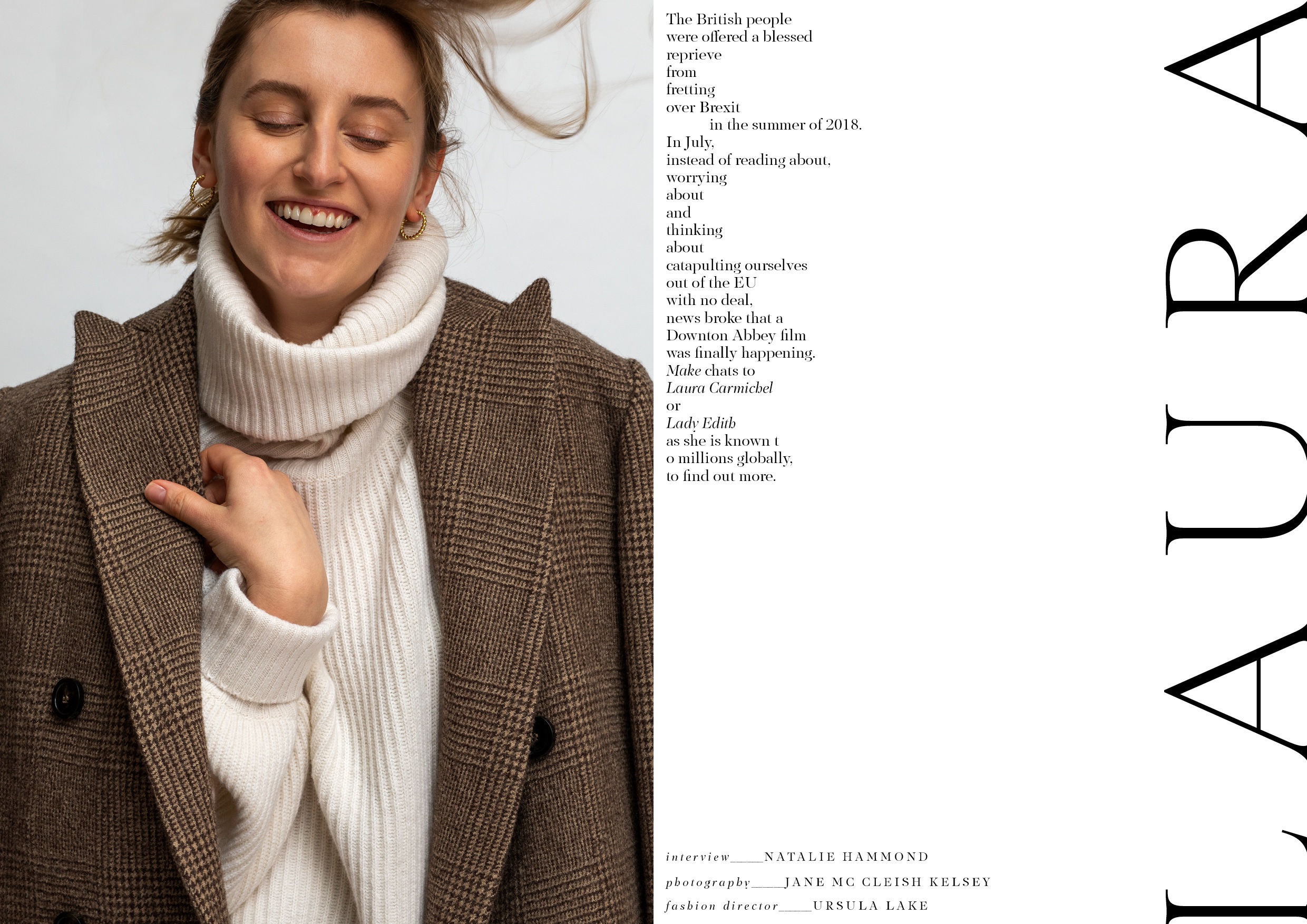 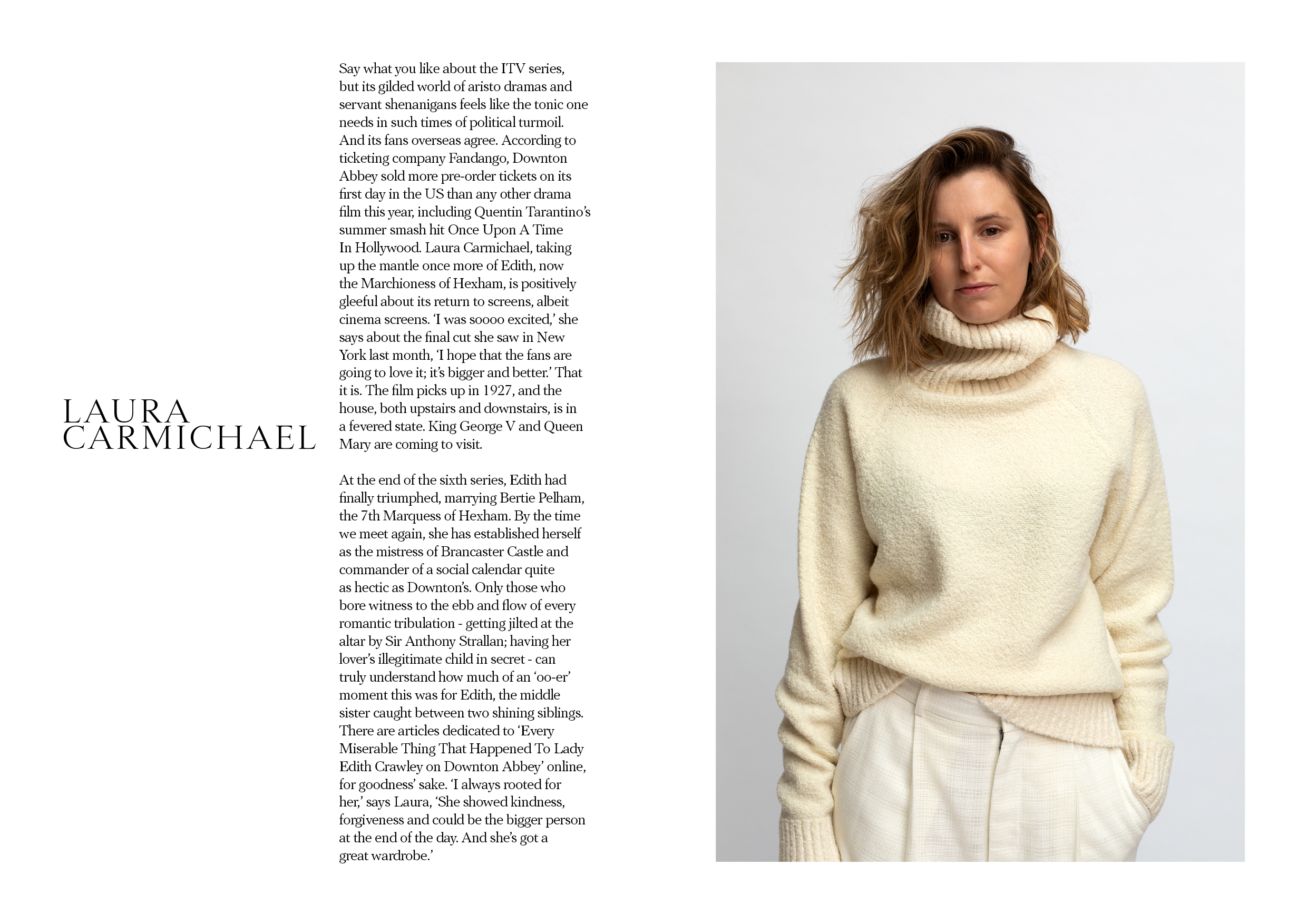 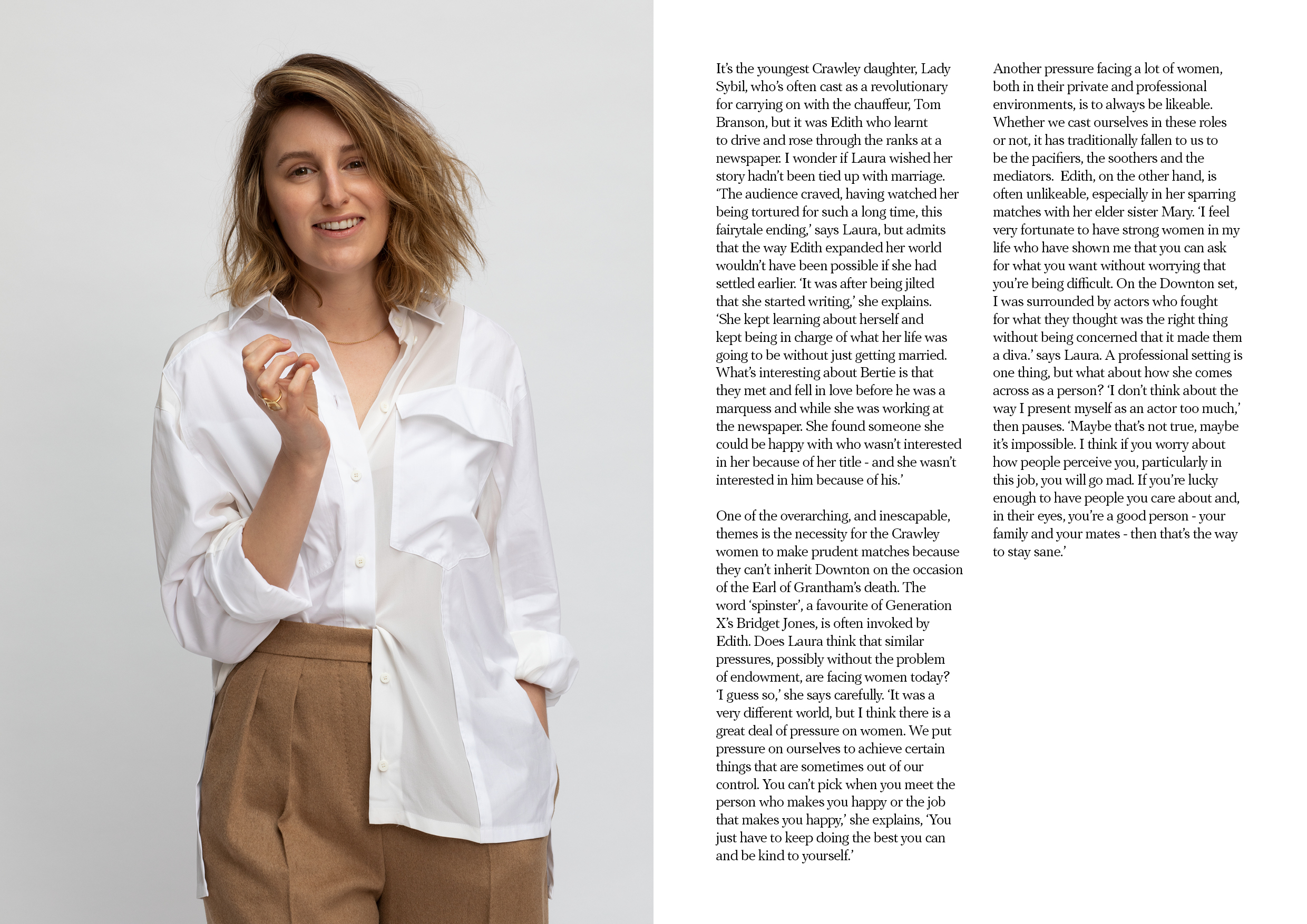 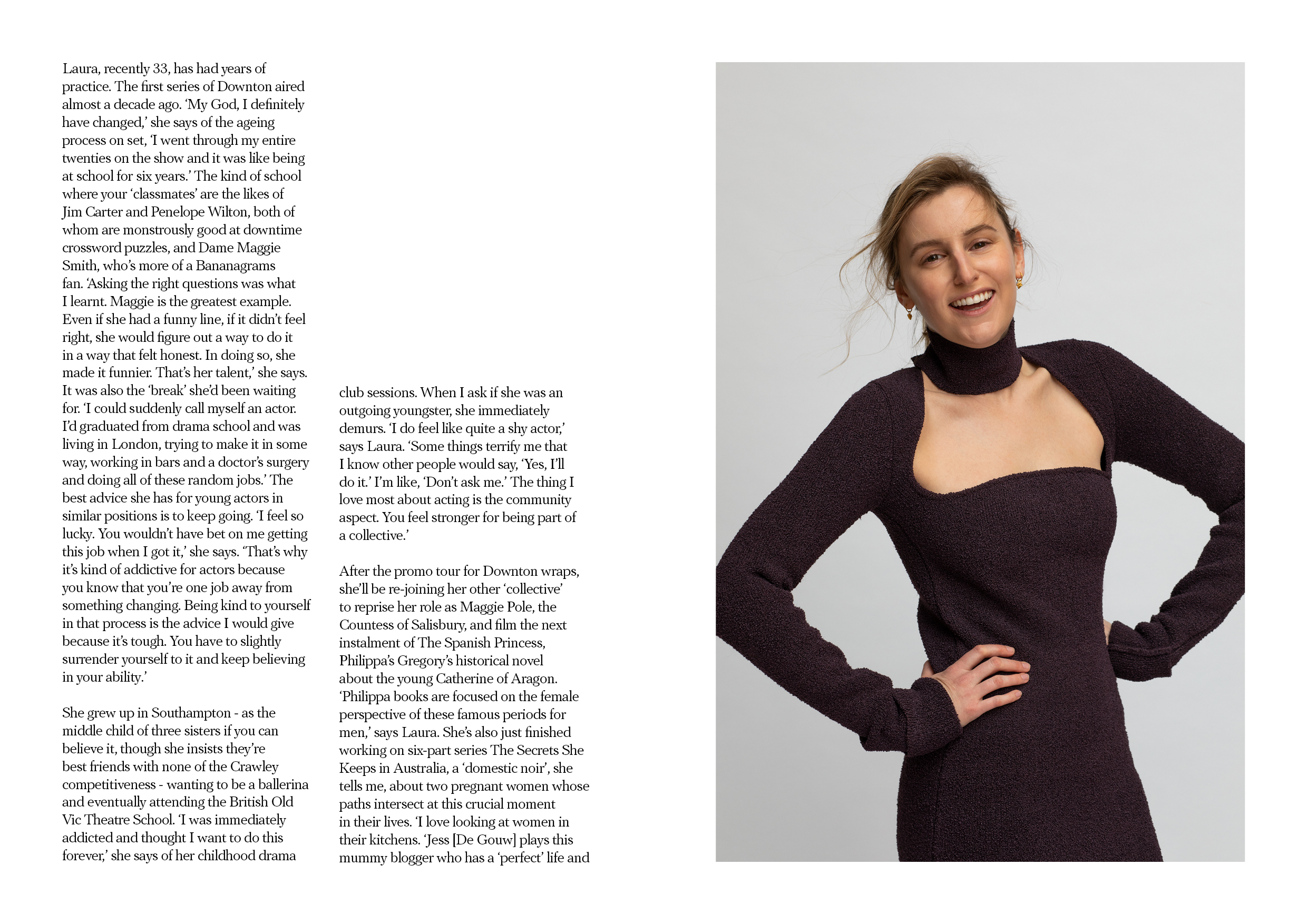 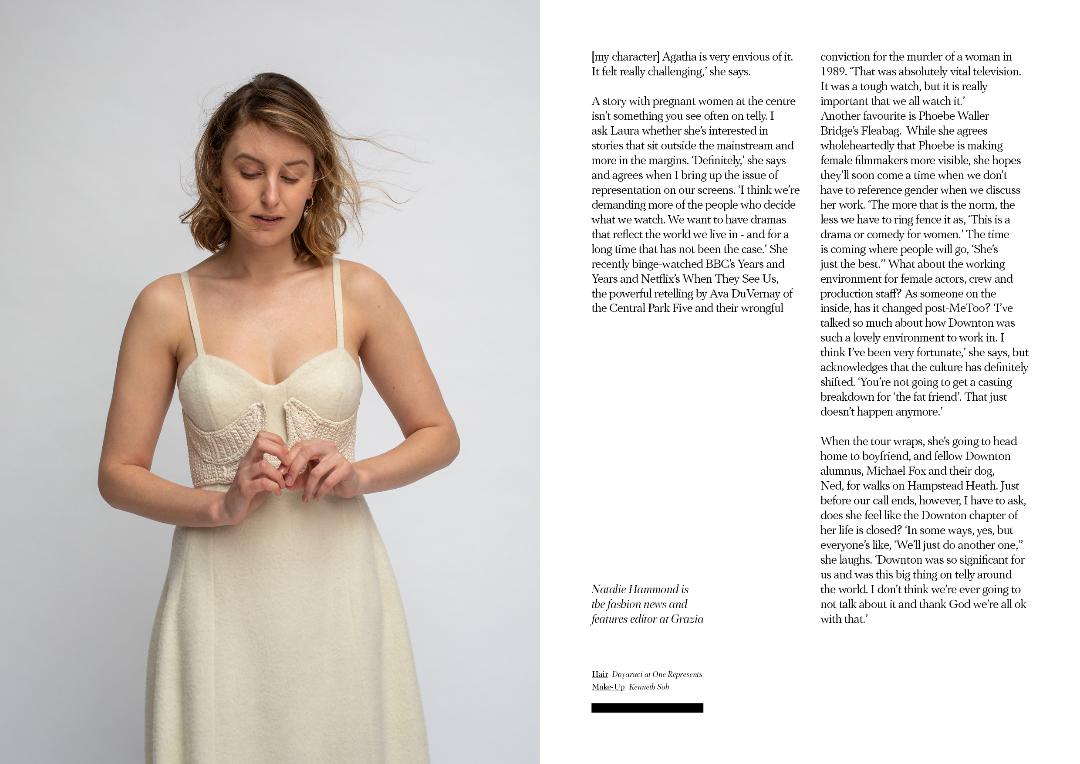