“I wake up every morning at nine and grab for the morning paper.  Then I look at the obituary page.  If my name is not on it, I get up.”

So wrote the American humourist Harry Hershfield, a man who made it to ninety and lived in perhaps the greatest era of social change that humanity has ever known.  Born in the 1880s, when Queen Victoria still had two decades left on the throne, Harry died in the mid-1970s.  That’s two world wars and change later when Mick Jagger was still married to Bianca but (probably) already sleeping with Jerry.  Talk about one lifetime, two worlds.   I’m not surprised he was checking those obituary pages.  Part of him must have felt like he’d lived forever.

In our own, astronomically fast-paced world – you know, the one that’s sinking into the ocean and where the news isn’t real – we face our own struggles with ageing, and it’s embarrassing and increasingly unmentionable sister, death.   On the plus side, we are all living longer, and enjoying a healthier, more mobile and less demented old age.  So far, so good. But the flip sides to that coin are many and complicated, and not all of them paint such a rosy picture.

It is a commonplace among my generation – I’m forty-six – that millennials, and the generation below them (does it have a name yet?) are failing to mature at the same rate as their parents and grandparents.  That young men and women around my oldest daughter’s age (twenty-seven) seem to find the time-honoured rites of passage into adulthood, such as moving out of the family home, getting married, having children, finding a career and saving for a home of their own, either undesirable or unattainable. Or perhaps both?

Carry this forward, and we can see the old norms crumbling for ourselves and our spouses too.  My husband is a generation older than me, at sixty-one.  When I was a child, sixty-one was a grandfather – my grandfather – retired, pottering about in the garden, shuffling off to Friday night bingo, picking up a pension.  But Robin still leads a completely middle aged life.  He works full time, his youngest child is seven, and his daily experience is still work stress and business deals and school fees and mortgages, with nary a pipe or slippers insight, poor guy.

For women, the shift from our mothers’ experience is different but just as stark.  I personally started young, but many of my friends did not begin to think seriously about having children until their mid-thirties.  That meant they went straight to IVF before they had passed Go or collected two hundred pounds.  Natural conception was already ruled out, or at best hovered somewhere in the distant background as a ‘wild-card’ option.   Most ultimately succeeded in becoming mothers, many using egg donors and/or surrogates.  In Los Angeles, where I live, this is mind-bogglingly common among middle class, affluent women in a position to afford it.  One or two of my friends were not able to conceive, however, and for some that has been a cause of considerable pain.  Our generation are learning the hard way that just because you look thirty in your instagram bikini shot and twenty-something men still hit on you, your ovaries know how old they are.

Soon, apparently, this may no longer be the case.  Breathless reports over the summer about the emergence of a relatively easy and affordable surgery to reverse menopause will no doubt shift the paradigm once again.  Women will now be able to choose to remain not just youthful-looking but actually fertile well into their forties and fifties, “levelling the playing field with men”, as many see it, just as the contraceptive pill did for women in the 1960s.  And while those people are not wrong: men are at least somewhat fertile for life, so why not women? The more choices the better, right?  At the risk of sounding like Carrie Bradshaw, I can’t help but wonder, is delaying menopause really going to make women happier?  Could you not also argue that it marks the latest step in society’s obsession with pathologising ageing, especially for women? After all, we all deplore the fact that from their teenage years on young women are bombarded with messages about how ugly and ‘fat’ their perfectly normal bodies are.  But if it’s wrong to force women to be unnaturally thin, isn’t it just as harmful to tell us as we age that we should inject away our perfectly natural wrinkles, dye our unsightly grey hair, and surgically ‘rejuvenate’ our vaginas?  The way I see it, there is nothing wrong with wanting to look one’s best, or with having more choices.  But at the same time, it is not a woman’s job to be beautiful, or her purpose either to have children or to remain youthful and fertile for as long as scientifically possible.  Theoretically, that’s the great thing about choices.  You can say ‘no’.  In reality, however, social pressure often makes that very difficult to do.  And the process of choosing in itself becomes fraught with unhappiness and insecurity, thus niftily defeating the object.

As for the children born to mothers and fathers both in their fifties…what will their experience be like?  Of course, it might be simply wonderful.  Or it might not.  We just don’t know, because this is uncharted territory.  No doubt it is a sign of my own ageing that troubles me as much as it does.   It’s the same instinct that makes me squirm uncomfortably through every episode of Black Mirror (and seriously consider throwing myself out of a moving car when I have the husband’s radio news blaring in one ear, teenage boys bickering in the other and a seven-year-old girl singing the Bunk’d theme tune over the top.  When did noise become such a big thing? )

The social labels of age are changing, at a dizzying rate.  So is the biology, and the science of intervention.  But in the end, some things remain the same.  The older generation still sees the world differently than their children.    Nostalgia for a lost past still competes with hope for a brighter, healthier, happier future.    And however fast we run from it, however firmly we stick our fingers in our ears or loudly we hum, we are all eventually going to die.  On my gloomier days, I can see a future of competitive funerals:  open caskets, full of beautiful, slim, line-free corpses in bikinis that don’t look a day over twenty-eight.   On better, calmer days, I imagine old people with their memories intact, free from the pain of arthritis, mobile, happy.  Living, rather than just alive.   If we can find the balance between those two visions, perhaps getting older can become something we celebrate, rather than dread.  I’m not at Harry Hershfield’s stage yet.  But when my name is in those obituary pages, I hope the picture that goes with shows a woman with a face like a pickled walnut, eyes that can still see, and a very big smile.

Tilly Bagshawe is the author of  ‘Murder at the Mill’ available at Amazon. 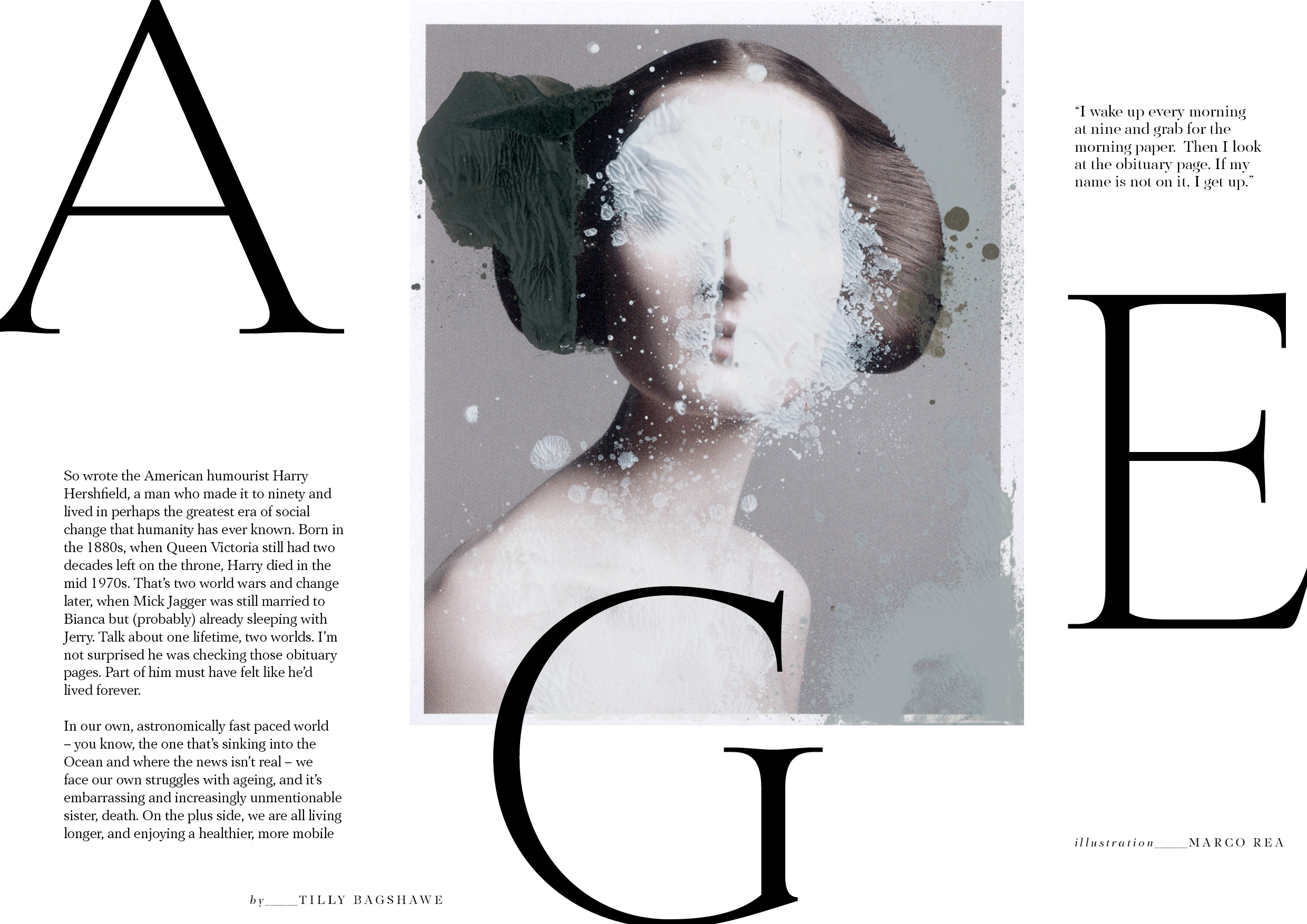 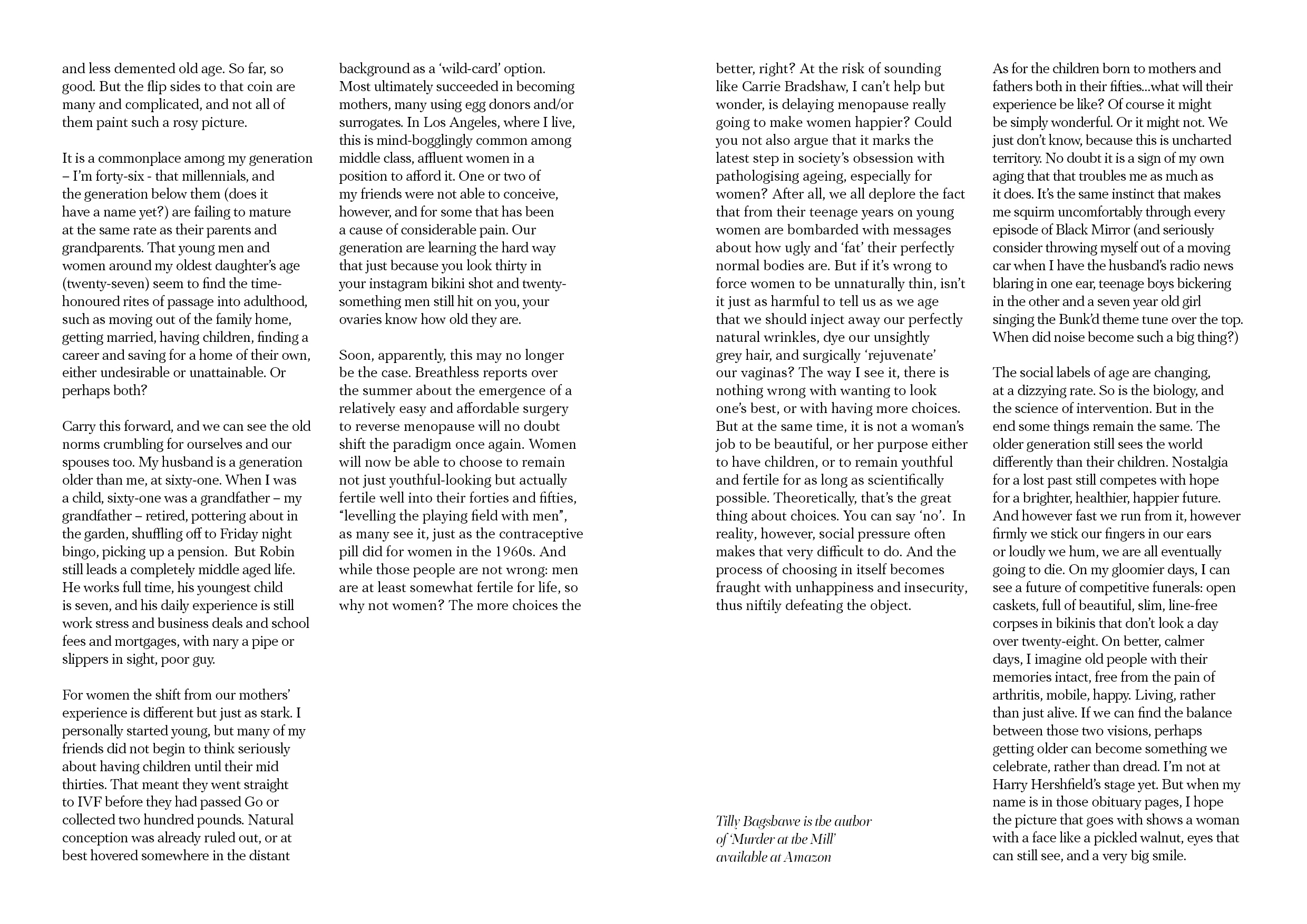