In the fourth of our Icons series, we discuss the Barbour jacket and those who wear it, from The Queen to Steve McQueen.

For decades the ‘Barbour’ had the peculiar if the not unique distinction of being the weatherproof of choice for Her Majesty’s Subjects at the extreme ends of the British social spectrum. Designed originally to offer protection to dockside workers the Barbour eventually found favour with the landed gentry, up to and including Her Majesty, while at the opposite end of the scale becoming indispensable to the oft-derided ‘greasy-biker’.

John Barbour, born in 1849, and raised on a farm in Galloway, southwest Scotland, crossed the border at the age of 20 to try his luck as a traveling draper, wending his way to South Shields on the southern side and eastern end of Hadrian’s Wall, at the mouth of the River Tyne. Happy with his new vocation, and location, he sent for and married his childhood sweetheart and the couple eventually produced 11 children. In 1894 Barbour opened ‘J Barbour & Sons’ in Market Place, South Shields. All-purpose drapers, Barbour’s soon became an important supplier of oilskin clothing to the ship-builders, dock workers and sailors that serviced the town’s major industries.

Waxed cotton, Egyptian cotton impregnated with paraffin wax, was an evolution of oilskin and was developed in Arbroath, Scotland, in the 1920s by sailmakers Francis Webster Ltd. The versatility and advantages of the new lightweight waterproof material made it an immediate success and Barbour was quick to see the potential of waxed cotton garments for ‘landlubbers’ and introduced a range of weatherproofs for farmers and gamekeepers. In 1936 John Barbour’s grandson, Duncan, a keen motorcyclist, created an all-in-one motorcycle over-suit – more like a pocketless jumpsuit than the Barbour’s we now know. This waxed-onesie would travel a peculiar route on its way to becoming the biker’s favourite.

Captain George Philips took command of the Royal Navy’s ‘U’ class submarine HMS ‘Ursula’ in 1937. Life on the conning tower and deck of a submarine in rough seas was particularly unpleasant and the standard issue Navy clothing offered poor protection. Philips was impressed by the one-piece Barbour motorcycle suit that one of his crew chose to wear ‘topside’ and in 1939 contacted Barbour to see if they could produce an easier to climb into the two-piece version. Happy to oblige, Barbour modified their suit to Philip’s specification, adding pockets for stowing stuff and a hood, and he duly ordered a batch, apparently at his own expense, to kit out his crew. The Barbour jacket and high-waisted leggings proved so efficient at keeping the elements at bay that in 1942 the outfit was adopted officially by the Royal Navy for submarine use, suitably modified to include a navy blue cotton lining.

Post-war, surplus ‘Ursula Suits’ were snapped up by motorcyclists, who usually cut off the hood, not much use on a speeding motorcycle, prompting Barbour to produce a civilian version. Called the ‘International’, after the most famous motorcycling ordeal of the day, the ‘International Six Day Trial’  a tortuous mainly off-road event first held in 1913, which attracted teams from around the world, it quickly established itself as the suit of choice for motorcycle use in off-road competition and on-road commuting. The ‘International’ gained its distinctive diagonally placed map pocket on the left breast in 1951.

In 1974, Barbour received a Royal Warrant for Waterproof and Protective clothing from the coach and four-driving Duke of Edinburgh and in 1981 they received the ultimate accolade with a further warrant from the Land Rover-driving Queen of England. If there had ever been any doubt, Barbour was now the official uniform of the ‘country set’.

One Barbour-wearing ISDT competitor, despite not actually finishing the event, is remembered by the general public more than any other, and that is Hollywood legend Steve McQueen. As a member of the US team, McQueen crashed out on the third day of the 1964 event, held in East-Germany, but as the McQueen legend continues to grow his participation has eclipsed all others. So much so that Barbour, in pursuit of younger more overtly fashion conscious customers, launched a ‘Steve McQueen’ range including a ‘McQueen-ised’ version of the famous International.

Much copied, ‘Barbour’ has become the generic term for a type of waxed jacket or coat and what started life as a humble utilitarian working man’s garment has matured into a timeless, fashion defying classless classic that continues to grace the backs of ‘real’ royalty as well as royalty of the rock’n’roll variety. We say Long live the Barbour.

Hair by Christopher Sweeney
Makeup by Linda Johansson
Model: Sarah Forth at Elite 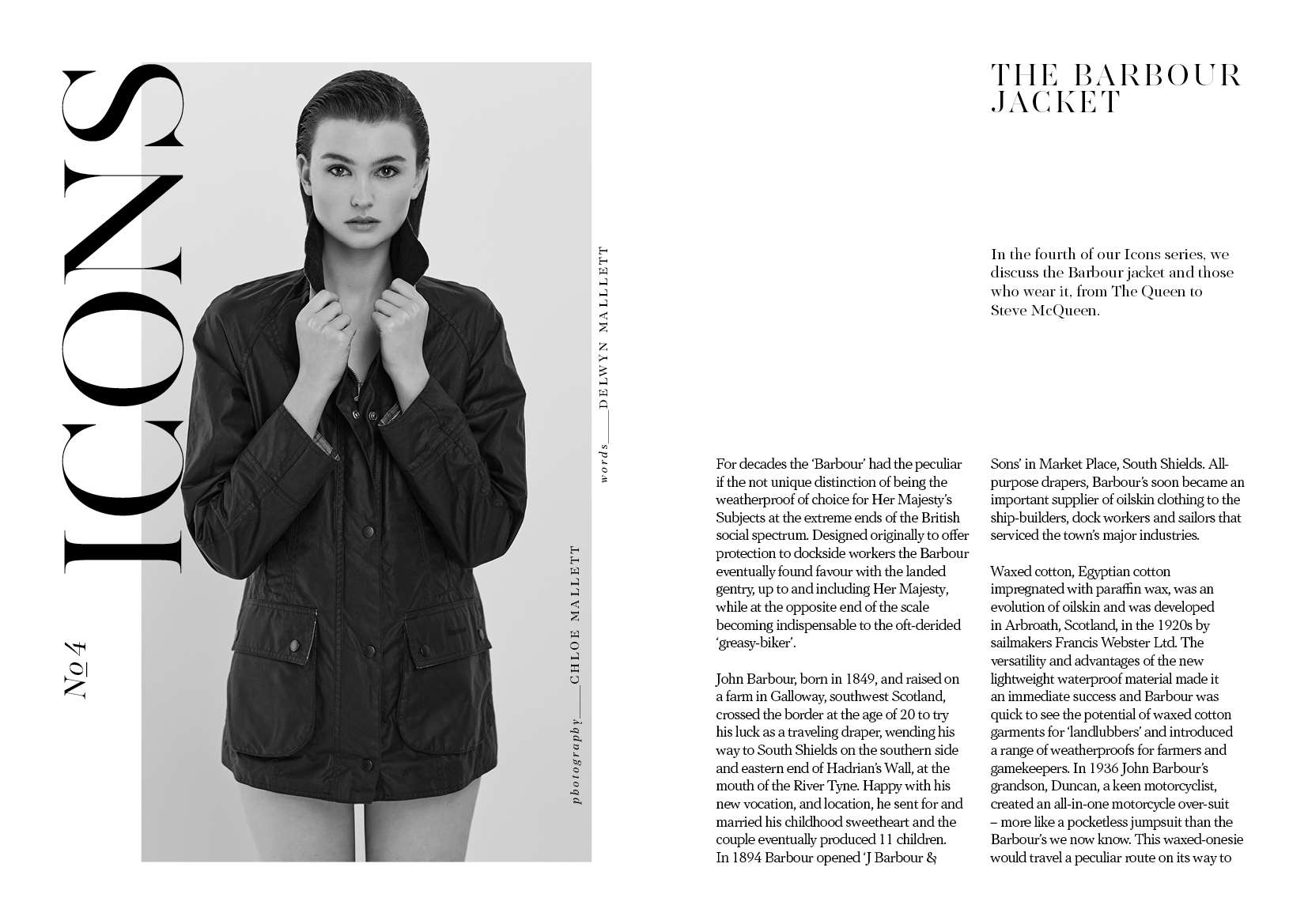 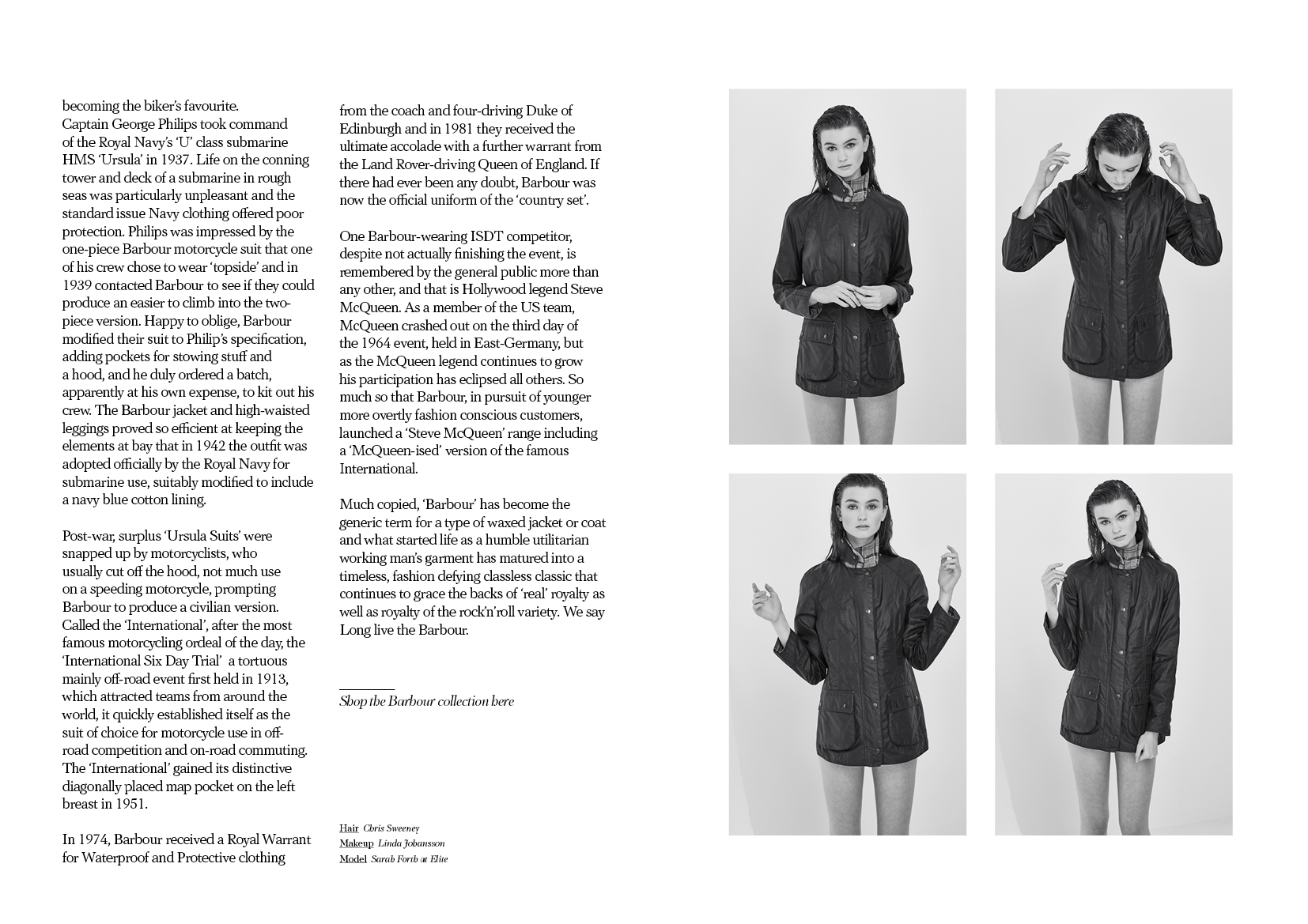 Hair by Christopher Sweeney
Makeup by Linda Johansson
Model: Sarah Forth at Elite 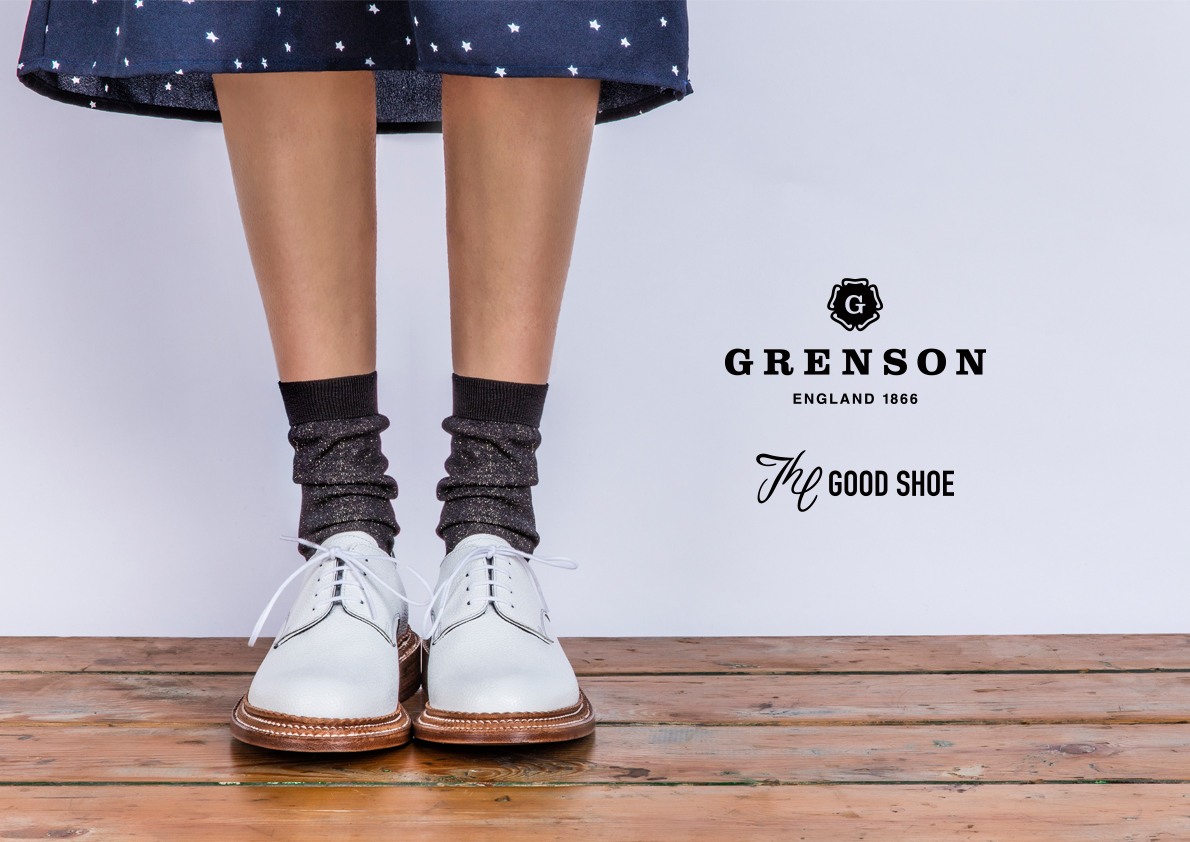